Did John McCain Collude with Terrorists?

Humberto Fontova
|
Posted: Sep 01, 2018 12:01 AM
Share   Tweet
The opinions expressed by columnists are their own and do not necessarily represent the views of Townhall.com. 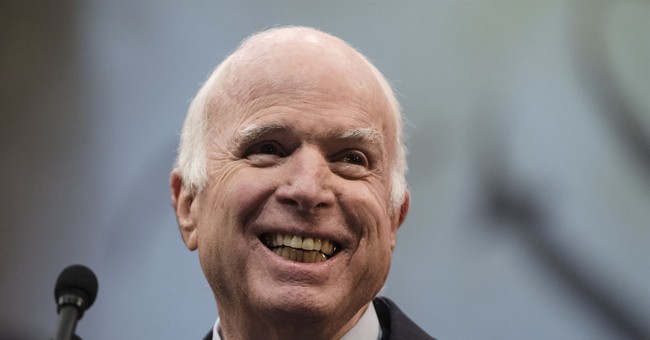 “McCain Campaign Palling Around with Terrorists in Miami?...Observers point to McCain and his supporter’s affiliations with long-time anti-Castro activists like Roberto Martin Perez.” (Huffington Post,  Nov. 8, 2008)

“I am preparing a reflection about (John) McCain’s relationship with the anti-Cuban terrorist mafia in Miami!” (Fidel Castro, June 2008.)

Wow!  Sure seems like “a long time ago in a place far, far away” doesn’t it, amigos? I mean, here was the mainstream media finding nasty things to say about John McCain-- bashing him as a right-wing zealot!

But in fact-- then as now--there’s nothing peculiar about the flamboyantly liberal Huffington Post proudly echoing the propaganda ministry of the Stalinist regime that jailed and tortured the most blacks, gays and feminist political prisoners in the modern history of the Western Hemisphere.

Not that the HuffPo “takes the bait” on all fake news, and all nonsensical hype!  No siree! In fact, they pride themselves on their keen insight and their sharp eye for straight and vital news. Take their initial coverage of Trump’s presidential campaign: “Trump's campaign is a sideshow…a clownshow… We won't take the bait. If you are interested in what The Donald has to say, you'll find it next to our stories on the Kardashians and The Bachelorette."

But if you’re interested in what a Stalinist regime’s propaganda ministry has to say you’ll find it unfiltered and covered as a serious matter. Because you see, amigos: the Huffington Post employs and publishes a high ranking propaganda apparatchik of the Castro regime itself--not that anyone would guess it from her brief HuffPo bio.

The communist apparatchik’s name is Margarita Alarcon Perea. Her father, Ricardo Alarcon, is no run-of-the-mill Castro regime apparatchik. No siree! The HuffPo, after all, has journalistic standards to uphold.

In fact from 1993-2013 Ricardo Alarcon served as (eunuch) President of Cuba’s National Assembly (a gaggle of rubber-stamping eunuchs.) So shameless and relentless has been Ricardo Alarcon’s historic bootlicking of the Castro dynasty over the decades that, back when Fidel Castro first got sick in 2006, Ricardo Alarcon was usually named by Cuba “experts” as the likely heir to Cuba’s Stalinist throne.

For an equivalent scam from our side imagine Fox News publishing articles by Dmitry Medvedev’s daughter and limiting her official bio to:  “Ms Medvedev is a freelance journalist and political analyst based in Moscow.”

But back to those “terrorists!” as labeled by the HuffPo:

Back in 2008 when John McCain-- eager for that vital Cuban-American vote in the vital swing state of Florida--addressed a crowd of Bay of Pigs veterans and former Cuban political prisoners (i.e. the Huffpo’s “terrorists!”) he learned that his fellow POW's in North Vietnam had shared torturers with the Cuban-American freedom-fighters then hosting him. These all-volunteer freedom-fighters included the longest-suffering political prisoners in modern history, having suffered prison camps, forced labor and torture chambers for a period three times as long in the Castro/Che Gulag as Alexander Solzhenitsyn suffered in Stalin's Gulag. Not that you’d guess any of that from Cuba “coverage” by the Fake News media.

"Anything that I and my friends might have experienced is nothing - nothing -- compared with what some of the men in this room went through," John McCain said as many of his hosts nodded solemnly.

You see, amigos: In 1967 the Castro regime –unable to get their hands on any defenseless Americans to torture and murder at home– sent several of their top torturers to North Vietnam, where defenseless Americans were abundantly available. Testimony during Congressional hearings titled, “The Cuban Torture Program; Torture of American Prisoners by Cuban Agents” held on November 1999 provide some of the harrowing details.

The communists titled their torture program “the Cuba Project,” and it took place during ‘67-‘68 primarily at the Cu Loc POW camp (also known as “The Zoo”) on the southwestern edge of Hanoi. In brief, this “Cuba Project” was a Joseph Mengelese experiment run by Cuban military “interrogation specialists” to determine how much physical and psychological agony a human can endure before cracking.

“Earl Cobeil was a complete physical disaster when we saw him,” testified another fellow POW, Col. Jack Bomar. “He had been tortured for days and days and days. His hands were almost severed from the manacles. He had bamboo in his shins. All kinds of welts up and down all over; his face was bloody. Then the Cuban torturer again began to beat him with a fan belt.”

According to the book Honor Bound: “the tortures of U.S. POWs by Castro’s agents were the worst sieges of torture any American withstood in Hanoi.”