Humberto Fontova
|
Posted: Dec 09, 2017 12:01 AM
Share   Tweet
The opinions expressed by columnists are their own and do not necessarily represent the views of Townhall.com. 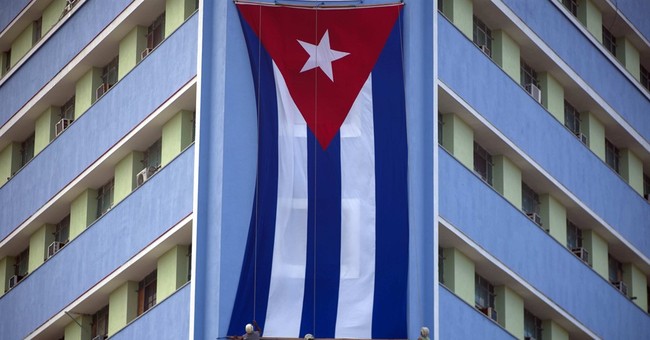 “Tribute paid to Fidel Castro from the U.S…In remembrance of the first anniversary of the physical disappearance of the Commander in Chief, Fidel Castro Ruz, Americans and Cubans convened on November 21 at the Embassy of Cuba in Washington DC to exchange on the legacy of the historic leader of the Cuban Revolution and particularly on his contribution and endeavors throughout the years. The panelists described from their personal experience, a man whose, altruism, intelligence, leadership and nobility proved to be indisputable. (recent press release by Cuba’s captive --literally! -- media.)

The ceremonial event at the Cuban embassy in Washington, D.C. on Nov. 21st in honor of Stalinist dictator Fidel Castro was described by Cuba’s media as a “tribute” in one case and as an “homage” in another.

Yet the event featured a person which the media–from The New York Times to the Washington Post, to CNN to CBS, etc. – has told us for decades is simply a scholarly and antiseptically “impartial Cuba-expert.”

You see, amigos: The panelists honoring Fidel Castro included some of the Fake News Media’s favorite “antiseptically impartial” and eminently scholarly “Cuba experts” and Trump critics, among them Julia Sweig.

“Julia Sweig is director for Latin America studies at the Council on Foreign Relations,” is how NPR introduces this favorite quest commentator of theirs.

“Julia Sweig heads the Latin American division for the Council on Foreign Relations," is how Stephen Colbert introduces her on his show.

“Julia E. Sweig is senior fellow and director of Latin America studies at the Council on Foreign Relations," is The New York Times’ intro.

Back in June when President Trump announced his Cuba policy, the Washington Post was quick out of the gates in denouncing the policy (“as a conflict of interest”) by quoting Julia Sweig:  “as the owner of a real estate company with a big stake in hotels and resorts, Trump brings an added element to an issue that is unique to his presidency — the ability, through his official actions, to undermine a growth area for his industry rivals who have raced in recent years to establish a foothold in a lucrative new market…That could be interpreted as the president is going to hold things up for the competition until the Trump Organization is ready to go down there.”

In brief, the scoundrelly President Trump was simply sandbagging his real-estate developer competition!

No such mention of questionable motives has ever flavored Julia Sweig’s commentary and “analysis” of anything Fidel or Raul Castro have ever done.  And there seems to be an excellent reason for this “oversight.”

Important background: Simmons, Sweig’s identifier, helped end the operations of 80 enemy agents against America, some are today behind bars. One of these had managed the deepest penetration of the U.S. Department of Defense in U.S. history. The spy’s name is Ana Belen Montes, known as “Castro’s Queen Jewel” in the intelligence community. “Montes passed some of our most sensitive information about Cuba back to Havana,” revealed then-Undersecretary for International Security John Bolton.

Today she serves a 25-year sentence in federal prison. She was convicted of conspiracy to commit espionage, the same charge leveled against Ethel and Julius Rosenberg, carrying the same potential death sentence for what is widely considered the most damaging espionage case since the “end” of the Cold War. Two years later, in 2003, Chris Simmons helped root out 14 Cuban spies who were promptly booted from the U.S.

Doesn’t publicly paying “tribute” and “homage” to the late Stalinist dictator at the Stalinist regime’s very embassy strike some of you as incongruous with the role of being an “impartial scholar” as claimed by the New York Times, The Washington Post, NPR  and CBS, among many others?

Ms. Sweig indeed holds preeminence in one field. No “scholar” in modern American history thanks the “warm friendship” and “support” of six different communist spies and terrorists in the acknowledgments to their book, three of whom were expelled from the U.S. for terrorism and/or espionage, two for a bombing plot whose death toll would have dwarfed 9/11. Some background:

On Nov. 17, 1962, the FBI cracked a plot by Cuban agents that targeted Macy's, Gimbel's, Bloomingdale's and Manhattan's Grand Central Terminal with a dozen incendiary devices and 500 kilos of TNT. The massive attack was set for the following week, the day after Thanksgiving. Macy's get's 50,000 shoppers that one day. Had those detonators gone off, 9/11’s death toll would have almost certainly taken second.

Here’s pictures of some of the Cuban terrorists upon arrest. Note the names: Elsa Montero and Jose Gomez Abad.

Now here’s an excerpt from the acknowledgements in Julia Sweig’s book Inside the Cuban Revolution, written in collaboration with the Castro-regime:

In addition to these two KGB-trained terrorists, the CFR’s Julia Sweig thanks Ramon Sanchez Parodi, Jose Antonio Arbesu, Fernando Miguel Garcia, Hugo Ernesto Yedra and Josefina Vidal for their “warmth, their friendship and their kindness in opening Cuban doors.”

All the above have been identified by Lt. Col Chris Simmons as veteran officers in Castro’s KGB-trained intelligence services.