Humberto Fontova
|
Posted: Jul 25, 2016 1:46 PM
Share   Tweet
The opinions expressed by columnists are their own and do not necessarily represent the views of Townhall.com. 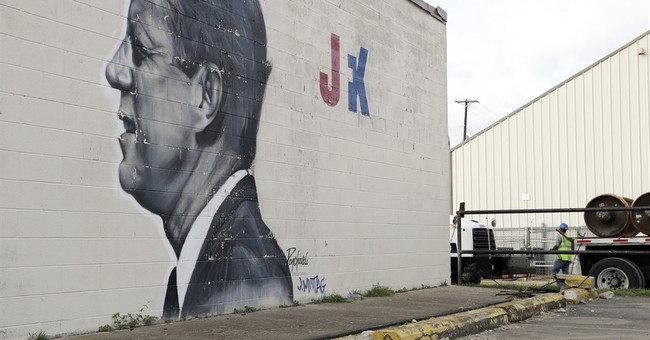 There was a day when sensible Americans (i.e. right-wingers) promptly pigeonholed people who accused “right-wingers!” (especially the most hardline, anti-communist and dastardly among them: Cuban-exiles!) of assassinating President Kennedy on the kook Left. In that day, such commie-like rantings might have also placed you on J. Edgar Hoover’s watch-list.

Oliver Stone (certainly among the kookiest leftists) based his movie JFK on this KGB/Castro- hatched disinformation meme. The “Old Right” from W.F. Buckley to Goldwater to AIM’s Reed Irvine immediately recognized, called-out and demolished this KGB/Castro hatched lie about "right-wingers" assassinating Kennedy.

Oh how Vladimir Putin must be snickering over Trump’s campaign!The very book that kicked off the disinformation extravaganza (“Oswald, Assassin or Fall Guy”), after all, was published by a KGB front company! Alas--at the time of its publication “Tinfoil-Hatters” were mostly on the Left.

John Stomper’s 1964 book, None Dare Call it Treason, was once regarded as the bible of the “hard,” “Mc Carthyite” or “borderline Bircher” Right. "Volumes could be written on the press coverage of President Kennedy’s assassination by a communist killer,” wrote Stormer. “Even after Oswald was captured and his Marxist affiliations disclosed, TV and radio commentators have conducted a continual crusade of distortion and smear to direct the blame against right wing or conservative groups."

Now the Republican Presidential candidate gleefully joins “that (Marxist) crusade of smear and distortion!” We’ve come a long way, Baby! Gosh! How the American “right” has “progressed” over the years!

“For 15 years of my life at the top of the Soviet bloc intelligence community, I was involved in a world-wide disinformation effort aimed at diverting attention away from the KGB’s involvement with Lee Harvey Oswald. The Kennedy assassination conspiracy was born—and it never died.” That’sIon Mihai Pacepa, the highest ranking intelligence official ever to defect from the Soviet bloc, confirming what all sensible Americans sensed as early as November 24th, 1963.

This confirmation (as if any was needed for sensible Americans) by the KGB-trained defector comes in his blockbuster book, “Programmed to Kill: Lee Harvey Oswald, the Soviet KGB and the Kennedy Assassination.”

It’s possible, of course, that Trump and his National Enquirer chums believe Ted Cruz’s father works for the KGB. But if so, this attribute should make Mr Rafael as attractive to Trump as that Knight in Shining Armor, Vladimir Putin. But instead he’s the dastardly mentor of “Lying Ted!”

Cuban exile Carlos Bringuier met Lee Harvey Oswald in New Orleans on August 5th, 1963. Tinfoil-hatters probably know him as the CIA operative who “staged” the fight with Oswald in New Orleans. After all these years, Carlos just rolls his eyes, shakes his head and chuckles over this one.

“The skinny guy walked into my store and started looking around,” recalls Carlos. “But I could sense he wasn’t a shopper. Sure enough, after a few minutes of browsing he came up and extended his hand. “Good afternoon,” he said. “I’m Lee Oswald.”

In 1963 the CIA regarded the Directorio Revolucionario Estudiantil (DRE) “the most militant and deeply motivated of all the Cuban exile organizations seeking to oust Castro.” Carlos Bringuier was their representative in New Orleans. It was DRE agents who infiltrated Cuba and brought out the first reports of Soviet missile installations–to the scoffs of the White House’s Best and Brightest. It took two months for anyone to finally take them seriously. A U-2 flight then confirmed every last detail of what the DRE boys had been risking their lives for months to report.

“Oswald approached me because my name was so often linked to anti-Castro activities in the local (New Orleans) news,” recalls Bringuier. “He even jammed his hand in his pocket and pulled out a roll of bills, offering to contribute to the anti-Castro cause. I was suspicious and declined.”

Quiroga noticed that Oswald’s living room was filled with Fair play For Cuba Committee literature. From one stack Oswald pulled an application to join the Committee and offered it to Quiroga. Yet during the Warren Commission circus The Fair Play for Cuba Committee repeatedly denied that Oswald had any links with them.

Among the things that caught Quiroga’s eye during his visit was Oswald speaking Russian with his wife and daughter. “Its good practice,” explained Oswald. “I’m studying foreign languages at Tulane University.” He was lying. Also keep in mind the date: this was 3 months before the assassination. Oswald’s stint in Russia was virtually unknown at the time.

On the very night of Nov. 22rd 1963 Carlos Bringuier went public on American radio and TV: “We don’t know yet if Lee Harvey Oswald is President Kennedy’s assassin. But if he is, then Fidel Castro’s hand is involved in this assassination. ”

Fidel Castro immediately called a press conference to denounce Carlos Bringuier by name as a “right-winger” and kick off the media disinformation campaign that finally peaked as high comedy with Oliver Stone’s JFK (and now with Trump’s campaign.)

But Carlos Bringuier was on to the disinformation campaign from its very birthday. Carlos knew Lee Harvey Oswald during his New Orleans days as well as anyone. In fact Carlos saw that (now) famous National Enquirer picture purportedly showing Rafael Cruz with Oswald back in 1963.The Secret Service showed it to Carlos while questioning him about Oswald a few days after the assassination. Though not a Cruz supporter, the notion that Ted Cruz’s father hob-nobbed with Oswald in New Orleans strikes Carlos Bringuier as “highly dubious” to say the least.

For 34 years Markus Wolf was the chief of East Germany’s foreign intelligence service, a branch of the STASI with many contacts and operations in Castro’s Cuba. It was the STASI rather than the KGB that undertook the training of Castro’s police and intelligence services. Wolf’s autobiography is titled, “Man Without a Face” and subtitled, “The Autobiography of Communism’s Greatest Spymaster.” Most intelligence experts agree that the subtitle fits. Wolf was once asked about the Kennedy assassination and quickly replied. “Don’t ask me –ask Fidel Castro.”