Breaking: US Enemy Cuba Caught Stealing Ultra-Sophisticated US Missile Technology for Sale to Other US Enemies

Humberto Fontova
|
Posted: Jan 08, 2016 12:17 PM
Share   Tweet
The opinions expressed by columnists are their own and do not necessarily represent the views of Townhall.com. 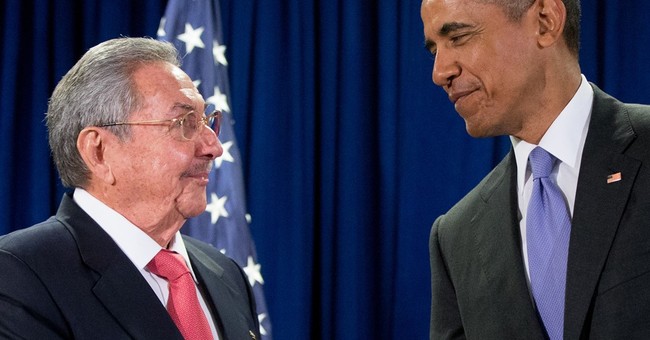 Actually that’s not the title of yesterday’s blockbuster report in the Wall Street Journal. Here’s the WSJ title: “Missing U.S. Missile Shows Up in Cuba.”

“An inert U.S. Hellfire missile sent to Europe (Spain) for training purposes was wrongly shipped from there to Cuba in 2014,” continues the WSJ, “a loss of sensitive military technology that ranks among the worst-known incidents of its kind. The unintended delivery of the missile to Cuba has confounded investigators and experts who work in a regulatory system designed to prevent precisely such equipment from falling into the wrong hands… Investigators are unclear if the incident was an error or the result of espionage. For more than a year, amid a historic thawing of relations between the U.S. and Cuba, American authorities have tried to get the Cuban government to return the missile.”

“Cuban officials are reportedly convulsed in guffaws very similar to their guffaws in response to the request by Obama officials for the return of some of the FBI’s most-wanted criminals who live like celebrities in Cuba. The hilarity displayed by Cuban officials in the face of sweating Obama administration officials reportedly also caused spittle to actually splatter the shaken U.S. officials when they meekly inquired about the return of the $7 billion Castro stole at Soviet gunpoint from U.S. citizens in 1960.

“All of this hilarity and truculence by Cuban officials in the face of Obama’s officials comes despite the flood of U.S. dollars to Cuba resulting from Obama’s recent “rapprochement” with the Castro regime. This U.S. economic lifeline was estimated at over $5 billion last year-- which amounts to more than what the Soviets pumped into Castro’s fiefdom annually at the height of their sponsorship.

“Better still, Obama threw the Castro brothers this economic lifeline in the very nick of time--just as their subsidies from Venezuela threatened to dry up. None of these factors stopped Castro’s apparatchiks from openly laughing in the faces of Obama’s groveling officials—indeed they made the guffaws all the louder. ”

Ok, Ok, the WSJ story obviously didn’t contain the second, third and fourth paragraphs above. But any semi-sane Cuba-watcher can easily visualize the incident.

The formerly missing missile, known as a Hellfire is a laser-guided, air-to-surface missile often fired from Apache attack helicopters and Predator Drones and has become “ an important part of the U.S. government’s antiterrorism arsenal,” according to the WSJ. In other words, it’s a hot item to get their hands for everyone from ISIS to Iran and from Syria to the Taliban.

Let’s play a fun game and see if you concur with my choice for article title. The game is called “Connecting Da Dots.” Here’s some of the dots:

"Cuba is intelligence trafficker to the world," stresses Lieut. Col. Chris Simmons, recently retired from the Defense Intelligence Agency and widely hailed as America’s top Cuba spycatcher. “Among many others, the U.S. military secrets stolen by Castro’s spies have been sold to former regimes in Iraq, Panama and Grenada, alerting these dictatorships to U.S. military plans against them and costing untold American lives.”

Retired Lt. Col. Chris Simmons helped uncover 14 Cuban spies, including Castro’s master-spy Ana Belen Montes, who today serves a 25 year prison sentence after conviction in 2002 for the deepest and most damaging penetration of the U.S. Defense Department in modern history. In brief, Simmons knows what he’s talking about.

The Hellfire missile’s Excellent Adventure began in Orlando International airport where its manufacturer Lockheed-Martin shipped it to Spain for a NATO training exercise at the ROTA military base in southern Spain. From there it took “a somewhat roundabout journey through Spain,” continues the WSJ story, “Germany and France before winding up at Charles de Gaulle Airport in Paris. From there, it was supposed to have been shipped back to Florida; instead, it was loaded onto an Air France flight to Havana.”

“In the most serious espionage case yet uncovered in Spain, prosecutors have charged five members of Spanish military intelligence and a businessman of spying for the Cuban government…Cuba's Intelligence Directorate moved its main European base to Madrid in the early 1990s.” (Miami Herald Jan. 19, 1999.)

“Cuban Intelligence (the DI) reportedly had 150 officers in Spain—considerably more than any NATO country had in the Spanish capital at the time. In addition to spying on NATO military forces, the DI was responsible for acquiring American technology denied to Cuba under the U.S. embargo.” (The National Interest, Sept. 29, 2013.)

“U.S. intelligence specialists have long assumed that Cuba provides other countries in the anti-U.S. firmament—such as Iran, China, and North Korea—with information, including commercial and technical data. (The National Interest, Sept. 29, 2013.)

“As we learned from Cuba's attempt to smuggle 240 tons of weapons -- including ballistic missile technology -- to North Korea in mid-2013, the Castros are more than willing to share such weapons, information and technology with other rogue actors.” (Capitol Hill Cubans, Jan. 7, 2016.)

But here’s what really galls: as early as June 2014 U.S. officials learned that the terror-sponsoring Castro brothers had hold of our missile. Obama’s officials were in hush-hush “negotiations” with Castro’s KGB-trained apparatchiks at that very time. And as mentioned, those “negotiations” possibly saved the Castro regime from bankruptcy.

And yet not only does the missile remain in Cuba—but Obama also removed Cuba from the State Department’s official list of terror sponsors!.... “The Art of the Deal”—INDEED!

“Mistakes are inherent in complicated businesses,” the WSJ quotes a U.S. official in closing. “Mistakes are a part of any human endeavor. Mistakes are made.”

Indeed, “U.S. official.” And when it comes to U.S. officials and Castro’s Cuba, some of those mistakes can be real doozies. To wit:

“Fidel Castro is not only NOT a communist –he’s a strong ANTI-Communist fighter. He’s ready to help us in the hemisphere’s anti-communist fight and we should share our intelligence with him. “(CIA Cuba expert” Frank Bender, April, 1959.)

“Nothing but refugee rumors. Nothing in Cuba presents a threat to the United States. There’s no likelihood that the Soviets or Cubans would try and install an offensive capability (missiles) in Cuba.” (JFK’s sneering National Security advisor, McGeorge Bundy on ABC’s Issues and Answers on October 14, 1962.)