Obama’s Cuba Caper at One Year 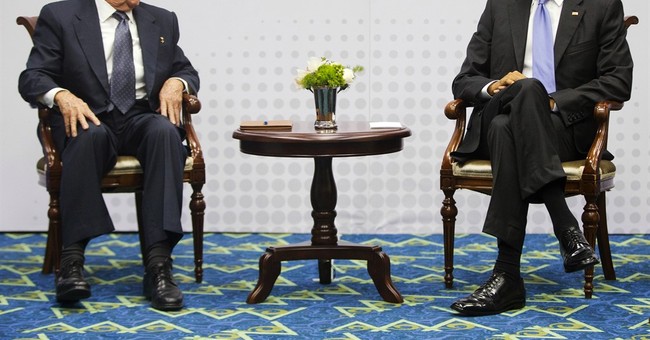 “I just have a hunch that Stalin is not that kind of man. Harry [Hopkins] says he's not and that he doesn't want anything but security for his country, and I think if I give him everything I possibly can and ask for nothing in return, noblesse oblige, he won't try to annex anything and will work with me for a world of democracy and peace.” (Democratic U.S. President Franklin D. Roosevelt, Feb. 1945.)

Barely one year after FDR’s surrender to Stalin at Yalta, Winston Churchill was seriously upsetting New–Dealer applecarts with his “Iron Curtain” Speech in Fulton Missouri.

Well, we’re one year into Obama’s “rapprochement” with the Castro regime. (I.e. a U.S. administration trashing the interests of the American and Cuban people with a financial rescue and diplomatic benediction of a bankrupt, kleptocratic, terror-sponsoring Stalinist regime that brought the world to the very brink of nuclear war.)

Here’s what’s crystal clear: exactly everything predicted by “embittered right–wing crackpot, Cuban exiles!” (as denounced by the mainstream media, the Obama State Department and Castro’s agents of influence—but I repeat myself) a year ago has come to pass. To wit:

The fat and happy Stalinist regime has unleashed a wave of repression on the Cuban people unlike anything seen in decades—even under Fidel. Cubans are risking their lives to flee Cuba at a rate unseen for decades.

Meanwhile, the Castro regime snickers and stonewalls over any settlement of the $7 billion in property stolen at Soviet gun-point from U.S. citizens ( and the torture and murder of a few who resisted.) Meanwhile some of the FBI’s most-wanted terrorists (against U.S. citizens) and cop-killers (of U.S. cops) who were granted (much-needed) asylum in Castro’s terror-sponsoring fiefdom remain in Cuba, snickering and living like celebrities.

Details of everything above here.

The outrage against Obama’s scandalous Cuba policy by folks who actually know how the Castro regime operates was manifested in a recent letter signed and sent by the longest-suffering political prisoners in modern history to president Obama.

Based on our history and experience as political prisoners under Castro's totalitarian regime, the new Cuba policy established by your Administration has been a regrettable mistake. This will prolong the life of the dictatorship, is worsening the human rights situation there, marginalizing the democratic opposition and compromising U.S. national security.

Naturally you haven’t heard of the letter—much less of the Cuban prisoners. So I won’t bother listing their names. Instead, for those interested, I’ll link the letter and signatories here.

SEE! You HAVE heard of THAT political prisoner, right?!..

Thought so! But he was jailed for terrorism by an independent judiciary of a U.S. Cold-War ally eight thousand miles away. Mandela also denounced the U.S. as “a country that has committed unspeakable atrocities in the world...They don't care for human beings!"

On the other hand, the Cuban political prisoners were jailed by Stalinist kangaroo courts 90 miles from our shores by the most rabidly anti-American regime in modern history—and which came closest of any to nuking us all. Furthermore most of the Cuban political prisoners are U.S. citizens today and live in the Miami and New York areas, a short cab-ride from all major U.S. media studios.

So it’s perfectly understandable why the media tugs your heartstrings about Mandela but ignores (if not actually disparages) the Cubans…Now regarding the “pragmatic” Raul Castro:

"If any Gorbachev raises his head around here," snarled Raul Castro as recently as 2002, "we'll promptly chop it off!" Yet this is the man who Obama hails as a “pragmatist.”

Cuba is a military dictatorship in the most genuine sense of the term, but you never hear it called that in the Mainstream Media. Actually, Raul Castro and his military cronies had been running Cuba (the nuts and bolts of the thing) for years while big brother Fidel reigned.

In fact, Raul Castro was a committed Communist well before Fidel. Unlike Fidel, Raul actually joined the youth wing of Cuba's Communist party. He did this in 1953 and traveled with his ideological cohorts to a Communist festival in Vienna that same year. From there, he traveled behind the Iron Curtain and met with Soviet officials. By 1957, Khrushchev had already assigned him a personal KGB handler named Nikolai Leonov.

Fidel Castro only officially declared Cuba "Socialist" in April of 1961 and himself a "Marxist-Leninist" only in October of 1961. Yet a mini-Communist state had existed in Cuba as early as 1958. This was Raul Castro's area of command during the anti-Batista rebellion in Cuba's Sierra Cristal mountains.

Many Americans of Cuban heritage vividly recall the Castro brothers' good-cop/bad-cop routine of 1959-60. Fidel played the good cop -- and his brother, Raul, the bad-cop. "Nothing had better happen to me," Fidel would warn from his ubiquitous pulpit, hinting that his sinister brother was poised in the wings. In August of 1960, Time magazine crowned Raul Castro "the fist" of the Cuban Revolution. Fidel was "the heart" and Che Guevara "the brains."

But let’s get some perspective from someone who actually knew and often interacted with Raul Castro. Romanian General Ion Pacepa was the Soviet bloc's highest ranking intelligence defector. He knew Raul Castro well for over two decades. As he explains: "As head of one of Communism's most criminal institutions, Raúl has been the butcher. He has been instrumental in the killing and terrorizing of thousands of Cubans."

Note that Pacepa regards Castro's political police as "one of Communism’s most criminal institutions." Coming from a man who learned the ropes of his profession from Stalin's henchmen and who served as Nikolai Ceaucescu's chief spy, this is saying something.