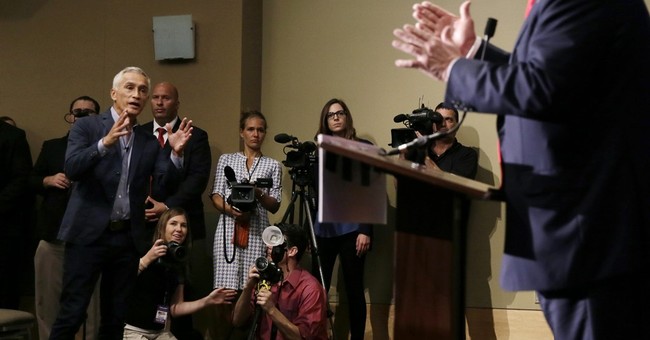 “I’ve never ceased to be Mexican. I have two passports, and I vote in elections in both countries. (Univision’s Jorge Ramos, Time Magazine, 1/2/2013.)

“Then why your silence on the thousands upon thousands of Cubans that are arrested, beaten, extorted and deported by migratory officials of YOUR country, Mr Ramos?” Rafael Alejandro Hernandez, 8/28/2015)

Rafael Alejandro Hernández is a young Cuban lawyer living in Mexico who knows from firsthand experience what migrants to Mexico go through. Last week he unloaded on Jorge Ramos:

“Mr Ramos, you as Mexican citizen have no moral authority whatsoever to criticize U.S. immigration policy.”

“You claim to be a journalist not a politician. But Mr Donald Trump threw you out only because you were impertinent and completely out of line. Your behavior was shameful. In fact you weren’t even asking a question. You were making outright declarations. Some journalist!

“Every week thousands of Cubans migrants to Mexico are arrested, beaten, extorted and swindled by the Mexican gov. in collusion with the Castro tyranny! But I’ve never heard you utter a peep against the Mexican government over this, Mr Jorge Ramos! And you claim to be a proud and vocal Mexican citizen, Mr Jorge Ramos!

“Why not come to your Mexico and try telling President Pena Nieto that deporting Cubans to Castro means they’ll live in a prison. Why not practice what you preach, Mr Ramos?

“You denounce the U.S.–a country that opened its doors to you, yourself, sir–but you refuse to utter a peep against your native Mexico, that deports Cubans not because they’re delinquents–but as a matter of policy.

“I’m speaking to you as someone who was jailed for 49 days in a Mexican prison for migrants and freed only after a hunger strike where I almost died.

“Next time you attend a Trump press conference you might ask permission to speak, and wait your turn like all the others. And since you seem to like to talk without permission, Mr Ramos, come to Mexico and try that stunt!”

In fact, Mexico can be quite hospitable to political migrants. Much depends on their political orientation and –especially--the official palms they grease. Take Leon Trotsky, who found brief asylum in Mexico from January 1937 until August 20th, 1940 when a Stalinist-agent named Ramon Mercader snuck into his house and smashed an ice-ax into his skull.

And take a Cuban criminal named Fidel Castro who in 1955 linked up with an Argentine hobo named Ernesto Guevara in Mexico City. Minus this historic hook-up everything points to Ernesto (shortly known a “Che”) continuing his life of a traveling hobo, panhandling, mooching off women, staying in flophouses and scribbling unreadable poetry. Instead this thoroughly unimposing vagabond and psycho named Ernesto Guevara had the magnificent fortune of linking up with modern history's top press agent, Fidel Castro, who for going on half a century now has had the mainstream media anxiously scurrying to his every beck and call and eating out of his hand like trained pigeons.

Fidel and Raul were in Mexico putting together a guerrilla band to invade Cuba and overthrow Batista. With the financial help of his wealthy Cuban backers of the time, Castro hired a Cuban Korean war veteran named Miguel Sanchez to train this guerrilla band. None of the trainees had the slightest combat-experience so their extra-curricular curiosity on the matter did not surprise Sanchez.

But one of the trainees struck Sanchez as bit strange, especially the gleam in his eye regarding the act of killing. “How many men have you killed?” this trainee constantly asked Sanchez. “What does it feel like to kill a man?”

What pleasure! What Pleasure!”

“Ernesto Guevara would close his eyes dreamily and recite it from memory during all of my visits, even at the dinner table, recalled Sanchez.

“He went into convulsions for a while and was finally still, gloats Che Guevara in his Cuban diaries. He was lovingly describing the death agonies of a bound Cuban peasant he had just shot in the temple with his pistol. “Now his belongings were mine.” (Unwittingly here Che Guevara defines Communism in a nutshell: cowardly murder and theft.)