The Stars and Stripes Surrender to Castro in Havana 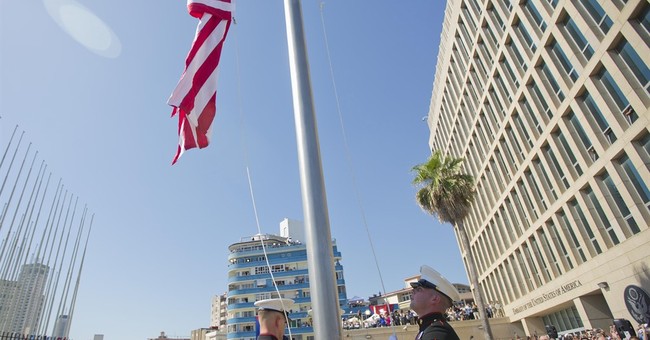 (“The US and Cuba are no longer enemies or rivals but neighbors. And it is time to let the world know that, we wish each other well.” Sec. of State John Kerry as the U.S. flag was raised in Havana, Aug, 14, 2015.)

“I see that the flagpole still stands,” said a choked-up Gen. Douglas Mc Arthur on March 2, 1945 as he entered devastated but liberated Corregidor. “Have our troops hoist the colors to its peak, and let no enemy ever haul them down. “

A U.S. Army sergeant named Manuel Perez-Garcia was on Luzon during that victorious flag-raising. Perez-Garcia was born in Cuba but immigrated to the U.S. after Pearl Harbor to join the U.S. Army and volunteer for combat. At the time of that flag-raising he’d fought almost constantly for 14 months, through New Guinea and the southern Philippines. His purple hearts, Bronze Star and Silver Star with Oak Leaf Cluster said something about his role in that victory for freedom. We can only imagine how he felt when he finally saw his beloved stars and stripes fluttering over Corregidor.

Upon the Communist invasion of South Korea in June of 1950, Manuel Perez-Garcia rallied to the U.S. colors again, volunteering for the U.S. army again at age 41. It took a gracious letter from President Harry Truman himself to explain that by U.S. law Manuel was slightly overaged but mostly that, “You, sir, have served well above and beyond your duty to the nation. You’ve written a brilliant page in service to this country.”

Mr Perez-Garcia’s son, Jorge, however was the right age for battle in Korea and stepped to the fore. He joined the U.S. army, made sergeant and died from a hail of Communist bullets while leading his men in Korea on May 4th 1952.

When Perez Garcia was 51 years old the Castro brothers and Che Guevara were busily converting his native country into a Soviet satrapy riddled with prison camps and mass graves. So Manuel volunteered for combat again. Like most of his Cuban Band of Brothers he fought to his very last bullet, inflicting casualties of 20 to 1 against his Soviet armed and led enemies. That bitter and bloody battleground is now known as The Bay of Pigs.

When the smoke cleared and their ammo had been expended to the very last bullet, when a hundred of them lay dead and hundreds more wounded, after their very mortars and machine gun barrel had almost melted from their furious rates of fire, after three days of relentless battle, barely 1,400 Cuban freedom-fighters -- without air support (from the U.S. Carriers just offshore) and without a single supporting shot by naval artillery (from U.S. cruisers and destroyers poised just offshore) -- had squared off against 21,000 Castro troops, his entire air force and squadrons of Soviet tanks. The Cuban freedom-fighters inflicted casualties of 20 to 1 against their Soviet-armed and led enemies. But to hear Castro's echo chambers in the mainstream media, think-tanks and academia, Fidel was the plucky David and the betrayed invaders the bumbling Goliath!

The battle was over in three days, but the heroism was not.

Now came almost two years in Castro's dungeons for Mr Perez-Garcia and his captured Band of Brothers, complete with the psychological torture that always accompanies communist incarceration. During these months in Castro's dungeons, the freedom-fighters lived under a daily firing squad-death sentence.

Escaping that sentence would have been easy, as Castro’s KGB-trained torturers “explained” almost daily: simply sign the little paper confessing they were “mercenaries of the Yankee imperialists” or go on record denouncing the U.S. In other words: publicly spit on the U.S. flag. In other words, the same stunt half of Hollywood pulls for the sake of publicity, these men could have pulled to save their lives.

Given these freedom-fighters recent betrayal, you’d think Castro had a cakewalk here, right?

None buckled. None even wobbled. None of these “men” (actually, some were as young as Audie Murphy had been upon trying to enlist in 1941) signed the document--nor uttered a word against the Stars and Stripes.

And I stress: these men were convinced that going on record trashing the U.S. would save their lives. After all, during these very months Che Guevara’s firing squads were murdering hundreds of bound and gagged Cubans weekly, and for “crimes” much less offensive than those of these men and boys.

Manuel Perez-Garcia passed away in Miami at the tender age of 102 in 2011. Today his ashes along with those of his son rest in Arlington. Maybe he’s lucky not to witness his beloved flag raised in Castro’s Havana, within walking distance of political prisons and torture chambers, a smirking Che Guevara mocking it from banners and murals in every direction.

For Manuel Perez-Garcia and his Band of Brothers that flag symbolized victory and freedom. In Havana today it symbolizes U.S. surrender to the Stalinist cowards who destroyed and defiled their homeland, and craved to nuke their adopted one.