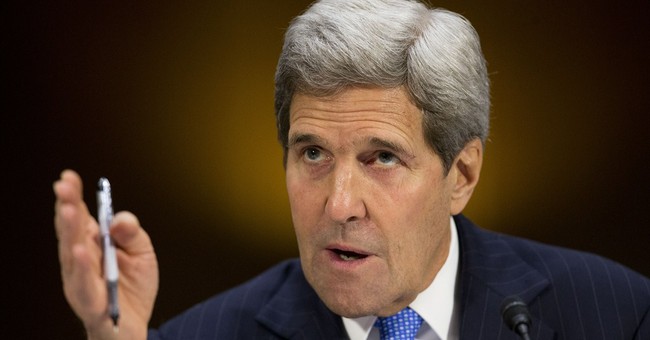 “My reaction to this letter is utter disbelief. In my 29 years as a Democratic senator from Massachusetts, I’ve never heard of or even heard of being proposed, anything comparable to this. If I had—not matter what the issue and who was President-- I would have certainly rejected it.” (Sec. of State John Kerry reacting to the letter drafted by freshman senator Tom Cotton, signed by 47 Republicans and addressed to Iranian leaders.)

If only the Republican Senators had followed up their letter to the terror-sponsoring Iranian officials this week with a visit and a handshake! Perhaps then John Kerry would find an "utterly believable" precedent (as in one commemorated by photos) for the Republicans' actions.

This precedent, of course, involves Democratic freshman Senator John Kerry, who far from “certainly rejecting” a very comparable letter-- not only signed it, but followed up his signature with a personal visit for a friendly chat and handshake with the U.S. enemy to whom it was affectionately addressed.

The letter and visit were to Daniel Ortega, the Castro-proxy who ruled Nicaragua in 1985. The issue was to denounce President Reagan’s policy of trying to arm anti-communist freedom-fighters who were giving Daniel Ortega, Fidel Castro and Soviet ruler Konstantin Chernenko serious fits at the time.

Back in the mid 80’s Nicaragua was the “City on a Hill” of the moment for western leftists. The communist ruler Daniel Ortega was their Sir Galahad/Robin Hood of the moment, a junior Fidel Castro of sorts. Many of Kerry’s Democratic congressional colleagues were content to flutter their eyelashes at this Communist cutthroat and pedophile from afar. Others, including Democratic majority leader Jim Wright, courted him with a perfumed love letter. Kerry naturally signed it.

“Dear Comandante,” the love letter began, “We want to commend you and the members of your government for taking steps to open up the political process in your country.”

In fact Nicaragua was then being Stalinized, with Fidel Castro’s help: wholesale theft of private property, murder, exile and mass-jailings of anti-Communists opponents. This process had freshman senator John Kerry in such a rapt condition that he apparently found the Democratic majority leader’s love note insufficiently adulatory. He yearned for a more intimate approach. So mere weeks after entering office in 1985 he set off for Managua with fellow freshman Tom Harkin of Iowa for a chummy face to face session with the Communist pedophile and Castro-proxy.

The most vital stanza of Daniel Ortega's Sandinista anthem bashes the U.S. as "el enemigo de la humanidad” (the enemy of humanity!) The line was probably lifted from a Che Guevara speech. Naturally the authors of such an anthem stole the heart of many Democrats, including the Majority leader, future Speaker of the House and our future Secretary of State.

Famous JFK fan John Kerry became a point man in the Democratic crusade to throttle the Nicaraguan freedom-fight. One Cuba wasn't enough for these people. They were The “Best and Brightest” of a new generation. They'd picked up the torch from Camelot. This honor demanded that they pledge themselves to creating another tropical Gulag and slaughterhouse on our doorstep. If Latin freedom fighters battled desperately in the field against a Soviet-supplied enemy-- if these freedom-fighters had their backs against the wall-- if any looked northward through sweat-stung eyes and blood-drenched bandages for an ally--if hundreds were dying in freedom' cause with gritted teeth in a desperate and uneven struggle against a Communist common enemy--then these freedom-fighters MUST be stabbed in the back! The legacy of JFK DEMANDED it!

Towards that noble goal John Kerry committed himself body and soul. Soon he was chairing "The Senate Subcommittee on Narcotics, Terrorism and International Operations" quickly dubbed "The Kerry Committee" by his media cronies and soulmates. Soon it was boasting, "77 instances where the Reagan Administration misled Congress about its policies in Central America!"

Lest we forget, it was here that the famous "Iran-Contra investigation" actually started. Soon the lurid accusations spawned an "Iran-Contra Committee "of its own and Kerry pressed ahead with his.

Shortly this Kerry Committee subpoenaed Che Guevara’s Cuban-American captor Felix Rodriguez, accusing him of being a drug-runner for the Nicaraguan contras. This accusation was backed by “evidence” from the leftist Institute for Policy Studies in Washington D.C., which, by the way, had earlier arranged Kerry and Harkin’s pilgrimage to Nicaragua. This Institute for Policy Studies was also discovered, by the way, to receive secret funding from the Castro regime.

At any rate, upon subpoenaing Bay of Pigs and Vietnam combat veteran Felix Rodriguez John Kerry finally stepped in it. He started messing with the WRONG dude.

A little background: As a 19 year-old member of Brigada 2506 (The Bay of Pigs freedom-fighters,) Rodriguez infiltrated Communist Cuba weeks before the Bay of Pigs invasion, organizing underground freedom-fighters, planning for the sabotage of key roads and bridges, staying a step ahead of the Castro's secret police and their KGB coaches. Over half of his comrades in the infiltration teams died in front of firing squads, after torture. Felix knew the odds. He volunteered anyway.

After the Best and Brightest stabbed the Bay of Pigs freedom-fighters in the back, Rodriguez again foiled the Communist dragnet by slipping into the Venezuelan embassy and escaping a year later to Florida. After the Best and Brightest stabbed them again and twisted the blade with the Kennedy- Khrushchev swindle (pledging the U.S. to protect Castro) Rodriguez, along with many of his Brigada Band of Brothers enlisted in the U.S. Army and volunteered for combat in Viet-Nam.

Later, as a CIA operative, Rodriguez played the key role in tracking down and capturing Che Guevara in Bolivia and was the last to question him.

"SENATOR!" an exasperated Rodriguez replied to a particularly snide question by committee chairman Kerry as the hearings commenced. "It's difficult for me to answer questions from a man I DO NOT RESPECT!"

From there things went downhill (for committee chairman John Kerry.)