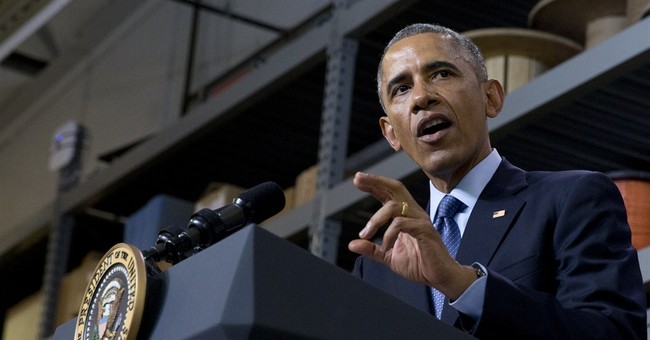 As usual with Obama’s policies let’s start with the lie: “We've always made it clear that there's no equivalence between an international development worker imprisoned for more than four years for doing nothing more than helping Cuban citizens gain access to the Internet, and convicted Cuban intelligence agents." (Pooja Jhunjhunwala, a State Department spokeswoman, 12/1/14.)

But 16 days later this equivalence was made manifest. Castro’s U.S. hostage, international development worker Alan Gross, was exchanged for three convicted (one for conspiracy to commit murder) Cuban intelligence agents. Given that “negotiations” between Obama’s bumbling functionaries (one a speechwriter, the other a Foreign Service water-boy) and Castro’s snickering KGB-trained apparatchiks had been ongoing for 18 months by the time of that State Dept. press release, it’s obvious that the Obama team had long established the equivalence.

“It wasn’t State Department officials,” an astounded Marco Rubio disclosed regarding our negotiators. “It was National Security Council officials…You sent unqualified people to negotiate with hardened, brutal spies and representatives of tyrants. It was negotiated at a secretive level involving agencies under the complete control of the White House, as a political move… And that mismatch is apparent in this sort of deal that was made.”

Our crack negotiators, you see, were up against Josefina Vidal, a Castroite spy who was expelled from the U.S. in 2003 for espionage. Such credentials apparently made her a “good-faith” partner in the eyes of the Obama administration.

Historically speaking, decorum calls for the victorious party in international disputes-- rather than rubbing his opponent’s face in his humiliating defeat—to keep poker-faced in his moment of triumph. (Think Gen. Douglas Mac Arthur on the USS Missouri Sept. 2, 1945.)

But the shellacking taken by U.S. interests in the recent “normalization” deal with the Castro regime made this impossible. So decorum was adjourned.

“We won the war!” Raul Castro trumpeted on Cuban television promptly after the White House announcement, while stressing that his regime would remain as Stalinist as ever. Who can blame Castro for gloating and snickering? On top of his spies (convicted by U.S. juries of everything from murder to spying on U.S. military installations) he got diplomatic benediction from the world’s most powerful nation, escaped scot-free with stealing $7 billion from U.S. businessmen and stockholders accompanied by the murder and torture of a few Americans who resisted in 1960. All this for grabbing a U.S. hostage (Alan Gross) and holding him in a KGB-designed prison cell for five years. In brief, the Alan Gross hostage-ploy worked like a charm.

Best of all, just as sugar-daddy Venezuela struggles to keep the sugar flowing (oil, actually, 100,000 essentially free barrels daily to Cuba) Obama comes to the rescue. At least he’s consistent. Obama never claimed attraction to the bumpkin notion of American “exceptionalism.” So now the “exceptional” American taxpayer appears headed the way of the more routine Russian, Venezuelan, French, Mexican, Japanese, Canadian, etc.—all of them routinely and royally rooked by the Castro regime when their governments extended trade credits to Cuba, the world’s top per-capita deadbeat. Our exceptionalism was protected by what was left of the Cuba “embargo,” which mandated cash-up-front for any sales to Cuba.

Obama claims his move was to improve the lot of the Cuban people. But recognizing they had the Obama team’s number (bumbling saps) from the minute “negotiations” began, Castro’s police unleashed a wave of terror over their subjects, brazenly arresting a record 13,000 Cubans during the span of the very “negotiations,” purportedly designed to ease their suffering.

At this point what do Castro and his military cronies who own Cuba have to lose vis a vis the U.S.? “Hasta la Victoria Siempre!” (Ever Onward to Victory!) Che Guevara’s famous slogan certainly applies to Castroite negotiations with the Obama team. “You Can’t Have it all?—Says WHO?!” might be a better one.

“But we trade with China, for crying out loud!” comes the reflexive retort. “So why not with Cuba?!”

China’s (admittedly despicable regime) allows a genuine private sector, pays its bills and has lots of goods Americans want—even need. An American can do business with a Chinese businessman not directly affiliated to the Chinese government. Whereas Cuba’s constitution outlaws essentially all private property, except fruit stands and shoe-shine booths. Essentially every business transaction and tourist expenditure in Cuba enriches the communist regime. As mentioned, the proof and verdict on this item has been in for years, for anyone who bothers to look.

Cubans themselves have seen and felt it during the past few years: record foreign investment and record tourism to Cuba = enrichment of the Cuban regime and increased repression. Plainly observable proof blew the “libertarian” pipe-dream to smithereens years ago. Alas, these dogmatists never bothered to poke their nose from behind their books on economic theory to observe the real world.

“But isn’t t time we tried something new with Cuba?” comes another retort from those with a bumper-sticker knowledge of U.S.-Cuban history. “At least President Obama is attempting a new policy.”

In fact every U.S. President—especially Republicans--since 1960 has attempted an “opening” to Cuba. But most realized that no advantages whatsoever would accrue for U.S. interests or for those of the Cuban people. In fact Ronald “Evil Empire” Reagan probably went furthest in this regard, sending Alexander Haig to meet personally in Mexico City with Cuba's "Vice President" Carlos Raphael Rodriguez to feel him out. Then he sent diplomatic troubleshooter General Vernon Walters to Havana for a meeting with the Maximum Leader himself.

Castro, as usual, turned on the charm but Walters returned telling President Reagan that it would be Castro’s way or no way. A few months later the 82nd Airborne stormed Cuba-occupied Grenada and Castro almost sh*t his pants.

With our current President the historic intransigence by the terror-sponsoring Castro regime proved no impediment whatsoever, something instantly evident to many of Castro’s terror affiliates who high-fived Raul Castro’s “WE WON!” Some are already gloating, snickering and rubbing their hands.

Take Hezbollah leader Ammar Moussawi for instance: “The firmness of Cuba’s positions and the steadfastness and patience of the Cuban people has pushed the hand of US administration…the achievements of Cuba, which was firm on its principles, is a lesson for all people of the world who are suffering from American hegemony.”

How comforting to know-- especially in light of the American no-show in Paris.

Beth Baumann
The Simple Reason Why the WSJ Editorial Board Was More Detailed About 'Bidenomics'
Matt Vespa
Is AG William Barr on the Chopping Block?
Matt Vespa