Have You No Sense of Decency, PBS? 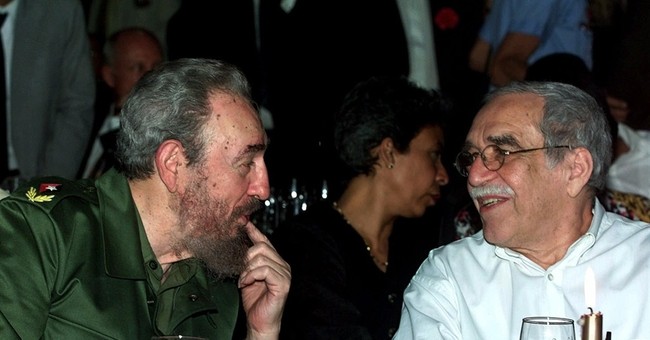 PBS, who operates partly on the dime of the U.S. taxpayer, just ran a one-hour special on the terror-sponsoring dictator who shrieked that “war with the U.S. is my true destiny!” and who came within a hair of nuking millions of PBS’ involuntary donors during the gravest military threat against the United States in modern history.

PBS, who bills itself as America’s “most-trusted source for news and public affairs programs,” aimed their documentary on the “turbulent life” of the “controversial Cuban leader” at a U.S. audience and titled it, The Fidel Castro Tapes.

But PBS pulled off its documentary without mentioningthe apparent trivialities cited above. That the subject of their program came closest of anyone to blowing up the world seems to strike PBS as a real snoozer.

Now when it came to their one-hour program on a freely-elected and immensely popular U.S. lawmaker (Senator Joe Mc Carthy) PBS shuddered with fear and loathing. In fact the program was titled, “Politics of Fear.” “His zealous campaigning ushered in one of the most repressive times in 20th-century American politics,” gasped the documentary. “These proceedings remain one of the most shameful moments in modern U.S. history.”

Apparently for PBS the term “controversial” seemed too mild when more villainous ones were handy for describing one of America’s most popular elected lawmakers during his time (lest we forget.) But the mild term served amply to describe a megalomaniacal, blood-lusting, war-mongering, missile-rattling dictator who jailed and tortured political prisoners at a higher rate than did Stalin during The Great Terror and murdered more of them in his first three years in power than Hitler murdered during his first six.

Oh, forgive me for an oversight. PBS also uses the term “contentious” and “provocative” to describe Fidel Castro.

Interestingly, PBS claims their program highlights how Fidel Castro “captured the attention of the world.” Some would say that splicing in a historical tid-bit about a true-life General Ripper reaching for the buttons of a true-life Doomsday Device while a nervous, sweating, nail-biting world (including most of its viewers and unwitting donors) quakes on the sidelines—this scene might qualify as a sure-fire attention-grabber.

Others might say the manner in which the megalomaniacal mass-murderer is foiled in the nick of time by another communist mass-murderer (Khrushchev) who, though he amply earned the nickname “Butcher of Budapest,” was himself horrified by the Cuban dictator’s bloodlust and yanked the nuclear missiles from his reach—some might think such a scene would surely perk up an audience.

Oh, almost forgot another detail: all the above attention-grabbers also happen to be completely true.

But maybe to PBS producers such scenes come across as pathetically mundane and bereft of drama, real snoozers?

Or maybe PBS‘s (not so-hidden) agenda involves soft -soaping anyone and anything issuing from the Left?

PBS, who boasts that their programs are “distinguished by professionalism and thoroughness” does not mention political prisoners, torture or terror-sponsorship whatsoever in its “comprehensive” coverage of the top torturer of political prisoners in the Western Hemisphere.

Now when PBS ran a program on another “controversial leader” from Latin America (anti-Communist Chilean President Augusto Pinochet) the first two paragraphs of the show’s trailer included the words “dictatorship,” “concentration camps,” “secret prisons,” “torture,” “murder” and “executions.” Then the show itself showcased nothing but the items mentioned above.

But instead of that …YAAAAAWN....nuclear apocalypse the “provocative Cuban leader” almost ignited, and those tens of thousands of totally snoozeworthy murders and tortures at his hands, here’s among the items that according to the PBS program helped Castro “grab the world’s attention:”

2. It is estimated by his rivals that during Batista's (Castro’s predecessor) reign more than twenty thousand political dissidentshad been killed.

3. Despite the U.S. blockade--Cuba's doctors are among the best trained in the world. The quality if Cub's healthcare is very good and also free of charge.

4. Fidel Castro attempted to make peace with the U.S.--but the U.S. refused so Castro turned to the Soviet Union for help.

1. PBS, who boasts that “accuracy” is their programming’s “cornerstone” might have researched the matter beyond Castroite sources and discovered how pre-Castro Cuba in fact enjoyed a higher standard of living with a larger middle class than much of Europe, from which people clamored to immigrate to Cuba.

2. PBS, who bills itself as America’s “most-trusted source for news and public affairs programs” might have researched the matter beyond Castroite sources and discovered how the “20,000 killed by Batista” meme was hatched in 1957 by a blatantly Fidelista Cuban magazine publisher named Miguel Angel Quevedo. Further research beyond Castroite sources would reveal how ten years after he hatched and spread the lie, Quevedo (from exile, he scooted out just ahead of a Castroite firing squad) confessed to the lie in a letter and greatly regretted how the lie helped the propaganda campaign to put Castro in power. The regret for the calamity he helped bring upon Cuba was such that, right after signing the letter, Miguel Angel Quevedo put a gun to his head and blew his brains out.

3. PBS, who boasts that they “embrace the highest commitment to excellence and professionalism”, could have researched the matter beyond Castroite sources and discovered how Castroite Cuba is in fact ravaged by infectious diseases unknown since 1900 and how the average height of Cubans has decreased by 8 centimeters in the past 25 years due to nutritional deficiencies. They could also research and discover how thousands of macrocepahlic children (abnormally large heads in proportion to their bodies) due to protein (primarily milk) deficiencies now exist in Cuba’s eastern provinces.

4. PBS, who boasts that its editorial content ”embraces intellectual honesty and transparency,” might have looked past Castroite sources on U.S. diplomacy and discovered that in fact the U.S. offered Castro’s government diplomatic recognition in record time, then showered it with $200 million in subsidies from U.S. taxpayers. Then during Castro’s first 16 months in power the U.S. made over 10 back channel diplomatic attempts to ascertain the cause of his tantrums and further charm and placate him. Argentine President Arturo Frondizi was the conduit for many of these and recounts their utter futility in his memoirs. Regarding the heartbroken Castro turning teary-eyed to the Soviets in 1969 after the U.S. snub, PBS could have done a little digging and discovered that Raul Castro had a KGB handler since 1954 and Soviet KGB and GRU agents were already swarming into Cuba during the first months of 1959.

Every debunking of every Castroite fairy-tale (a.k.a. mainstream media meme on Cuba) mentioned above is thoroughly documented here.

In fact such shameless propagandizing for Castroism is nothing new for PBS, which hails Estela Bravo’s 1992 documentary Miami-Havana, as among the “10 best documentaries” of its Point of View series. For years Estela Bravo was an executive in the Castro regime’s Oficina de Publicaciones Consejo de Estado, (a division of the Stalinist regime’s propaganda ministry.)

PBS boasts of “shielding” their “creative and editorial processes from political pressure or improper influence from funders or other sources.” In other words, for fear of “improper influence,” no PBS program dares flaunt a Coke can or Big Mac. And heaven forbid that a Republican political operative should contaminate one of their pristinely objective programs. But the propaganda ministry of a totalitarian regime often dictates the contents of PBS programs. Such input apparently does not qualify as “improper influence.”

Here’ another comforting boast from the PBS Mission Statement: “As America’s largest classroom, PBS is the No. 1 source of media content for preschool teachers.”

Now here’s another comforting boast: "Give me four years to teach the childrenand the seed I have sown will never be uprooted." - Vladimir Lenin.