A Place Where EVERY Week is "Shark Week" 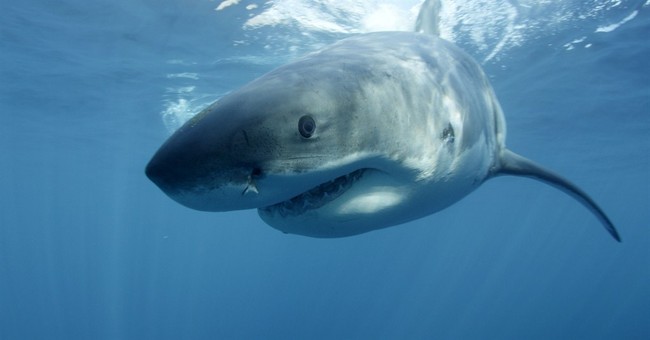 “Getting attacked by a shark just might be the scariest event in nature!” gasps a Discovery Channel narrator during Shark Week. “Australia recorded 56 fatal shark attacks between 1956 and 2008!” he gasps again. “Find out what it's like from people who've lived to tell the tale!”

So the Discovery Channel goes back over half a century and to a distant continent to interview the victims and dramatize the attacks. But why the distant timeline and setting, ask many people in South Florida?

“Something was moving in this raft,” recalls an airborne rescuer. “So I went in lower. The water all around the raft was turning red…the cloud spreading. Then I saw the shark—about the same length as the raft. The rafter was in fact a Cuban woman in her early twenties. Upon her rescue we found she had two bullet wounds in her legs from Castro’s frontier police. All others in the raft, including two infants had died, as did the shark, from being repeatedly stabbed by the pointed end of a broken oar by Maria. The Shark had bitten the oar in half as Maria pounded him...I started flying rescue missions full-time after that.”

“The boys’ father, delirious from thirst and exposure, finally jumped in the water,” recalls another rescuer. “So the sons threw him a rope tied to the raft and he clutched it. They turned away for a second, slightly relieved—but only to spot a huge shark approaching, then another. Soon an entire school surrounded the raft and they ripped into their father…The water turned red as their father was eaten alive….. I can tell you from decades of and heart-breaking work from our center here in Key West that in the Florida straits every week is shark week.

Where the “root-cause” of this drama and horror more politically-correct can you imagine its popularity in movies? Docudramas? Reality TV? But as usual, Castro also escapes censure for this form of torture and mass-murder.

The waters surrounding Cuba are famed for their hordes of sharks. Most people entering them for extended periods (all those showboat swimmers and surfers) insist on a defense against them. Yet from a quarter to a half million Cubans have crossed these waters with little between them and the sharks than thin rubber or canvas--and knowing the odds were close to 50-50 that their craft would overturn or crumble.

Not that ( given the media silence) most of you would have any reason to know this, but right off the southern Florida coast an estimated 70-80,000 people have perished since 1961 on the high seas, a large but unknown number of these at the hands (jaws, actually) of sharks. To this day most airborne rescuers report seeing sharks in the vicinity of most Cuban rafters. Many have observed attacks. Most survivors mention sharks and shark attacks often during their terrible voyage.

So here’s one of America’s most populous states and one bounded by beaches crammed with tourists. You’d really think this setting right off the U.S. coast could provide the Discovery Channel with material much more dramatic and relevant (titillating) for its U.S. audience. But where’s the Discovery Channel on this?

Perhaps the Discovery Channel’s budgets remain unscathed by Obama-nomics and the expense of flying production crews to Australia, South Africa, etc. rather than to Miami seems trivial?

On the other hand, upon viewing a Shark Week segment set in Florida, some viewers might ask: “But why is it that for over half a century so many thousands of people have risked the “scariest event in nature!” in the Florida straits?”

Ah! And there’s the rub.

The Discovery Channel, you see, is a major business partner of the Castro regime. So such a show would probably not sit well with their communist client. When it comes to the U.S. media and U.S. celebrities, after all, this communist client is much more accustomed to seeing such items as Newsweek hailing Cuba as among the “Best countries in the world to live,” to hearing Jack Nicholson hail Castro’s Stalinist fiefdom as “a paradise!” and to hear Bonnie Raitt commemorate Cuba in song as a “Happy Little Island!”

Never mind that ten to twenty times as many people have died attempting to flee Castro’s Cuba as died trying to flee East Germany, who—best we can tell--won no awards from Newsweek for its “quality of life.” What makes these stats even worse is that prior to Castroism Cuba took in immigrants at a higher rate than did the U.S! And mostly from Europe. Indeed more Americans lived in Cuba than Cubans in the U.S!

The Discovery Channel’s “Buena Vista Fishing Videos” dramatizes their business partnership with Castro. This show features sport-fishing videos filmed in full partnership with the Stalinist regime’s ministry of tourism. These attract a large number of well-heeled sport fishermen from around the world to Cuba’s “unspoiled” and “fish-filled” coastal waters.

By the simply expedient of banning boat ownership under penalty of torture chamber and/or firing-squad for everyone except top-regime officials many other nations could boast fishing grounds every bit as “unspoiled” as those surrounding the Castro brothers’ fiefdom.

He'd be loath to admit it, being a Che-T-shirt-wearer and all, but Eric Burdon of the Animals wrote a song that resounds with many Cubans: "We gotta get outta this place -- if it's the last thing we ever do!"

The last thing, indeed, for an estimated one in three of the desperate Cuban escapes during the '60s, '70s and '80s. This is according to a study by the late Cuban-American scholar Dr. Armando Lago. A consistently hot item on Cuba's black market is used motor oil: poor man's shark-repellent, they call it. Perhaps for a few minutes. I suppose we all cling to false hopes when desperate. And people get no more desperate than when striving to flee the handiwork of Newsweek’s “Quality-of-Life” winner.