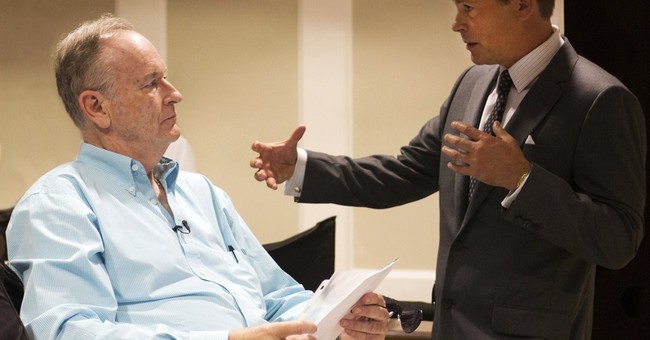 It began, innocently enough, with a Super Bowl undercard event: President Obama was interviewed before the big blowout by Bill O'Reilly, who has the biggest audience in cableland.

The interview was a classic of the genre with O'Reilly trying repeatedly to entice the president to answer questions that the president has always refused to answer.

I scored it a tie, with O'Reilly doing the best anyone can who will not commit an entire sit-down to a single subject. Eric Wemple, media writer of the Washington Post, agreed with my assessment in a blog post titled "Fox New's Bill O'Reilly aces Obama interview."

But the Washington Post's Dana Milbank did not. Milbank slammed O'Reilly's performance. And O'Reilly noticed.

O'Reilly opened my radio show Tuesday and took about a minute to get to Milbank, calling the Post's columnist "a far left kook," "a dishonest man," "a weasel" whom "the audience despises" who "cross[ed] the line into lying." (Transcript and audio here.) My talk with O'Reilly covered many subjects, including my assessments --pro and con of his interview, my correction of his misunderstanding of Hillary's role on the terrible night in Benghazi, and a quick note that he needed better prep on the Con Law stuff as the president had misled him on the Little Sisters of the Poor case-- which should underscore that O'Reilly doesn't mind an argument or a correction.

But he really dislikes Milbank because he believes Milbank is dishonest.

I did the obvious thing, which is to call Dana Milbank and have him on the very next hour. Milbank agreed and that audio and transcript are here. Milbank's primary response is that O'Reilly cannot point to anything that is factually wrong in Milbank's column. I suspect that O'Reilly would respond that Milbank's dishonesty is what burns him, not a fact check. (You might also enjoy Milbank's entry into the competition I am hosting to describe Secretary of State Clinton's achievements while running State, which like all others to days, really cannot provide a handle to hold on to.)

Notice of and reactions to O'Reilly-Milbank began to roll in -from Politico's Dylan Byers, from TPM, from Jamie Weinstein at The Daily Caller, Mediate. The main event had been Sunday's sit-down between the Fox News host and the president. This was an after-skirmish. And it tells us much more about the MSM than it does about the president. Mostly it tells us that much of MSM is deeply invested in the Benghazi cover-up and will react virulently to any attempt to crack open the details of that scandal.

The president told us nothing about Benghazi in the interview. Refused to actually. He never does and he never will. Not on Benghazi, nor Obamacare, nor the IRS scandal. All obfuscation all the time.

Had the president made even a small effort to engage in other than the same talking points he always dishes out on any of the key subjects, O'Reilly would have paused and engaged. But the president didn't. In fact he dissembled, most obviously on the topic of the Benghazi attacks, as Senator Kelly Ayotte laid out in great detail, also on my show Tuesday. (Transcript here.)

This pattern of a refusal to engage the public in a serious way on the most serious of subjects --terrorism and the death of Americans at the hands of terrorists-- has divided journalism into professionals and protectors. The professionals, O'Reilly among them, want some answers, and try constantly to get them as well as ratings, readers, or listeners. Professionals mix it up even with the electeds they admire when they have to in order to get answers on the most important subjects.

"Protectors" never do. In fact protectors attack the professionals, again and again and again. Milbank is a classic protector. He is as partisan as Rush Limbaugh, just with a much, much smaller audience. (Remember the orange hunting vest? I do and was happy to remind Milbank of it yesterday.) I am a partisan too, though I have often clashed with people I admire over subjects on which I think they are wrong. (Most recently with Paul Ryan on the cut to the COLA of the career military.) The job of the media is to focus, focus, focus on the key issues while delivering breaking news, not to reflexively help the electeds they favor dissemble and avoid the most important questions and controversies.

I spent eight years defending W on air and off, differing with him only on a few issues like the ports deal, the immigration bill, the policy towards Iran-- but never not focusing on the key issues of the day. Unlike today's MSM circling their wagons around Obama-Clinton and refusing to dig into any of the many failures, conservative media spent almost every day focused on the war, the surge, the financial panic when it came, the immigration bill…all of the issues that mattered to the public.

Right now a large swath of the Manhattan-Beltway media elite is trying to do exactly the opposite of focus on the key issues. They are in fact trying to help the president escape the consequences of the epic Obamacare fail, and to assist in the stonewalling of Benghazi and the IRS scandal. They are helping former Secretary of State Clinton prep for a return to the White House, this time as president. They are all playing the Jay Carney game, pretending to be journalists and in fact auditioning to follow Carney to the podium at the front of the room.

Dana Milbank is among their number. Monday he lambasted a journalist, O'Reilly, for pressing a president to answer tough questions in a serious, persistent but respectful way. O'Reilly blasted back and though O'Reilly's language is not what I would use, I hadn't been attacked.

Here is what to take away from this small skirmish in the journo-wars: They are just getting started because Hillary is just beginning her run. Too many writers, reporters, editors, producers and on-air talent are too invested in Clinton-world to do other than battle every attack on the president or her as "over-the-top" or driven by conspiracy. Thus they turn their backs on Obama-Clinton scandals and failures while gang-tackling Chris Christie over "bridgegate." This is the life they have chosen, but they have to pretend to be other than partisans. And they will use their positions as "journalists" to try and set the rules four 2016 and beyond.

Milbank ought to have been scribbling about the president's hilarious dismissal of the possibility of even a bit of corruption at the IRS when Lois Lerner took the Fifth.

Milbank ought to have asked --as Wemple did-- what does it take to get fired in this Administration on a day when an epic fraud in Oregon on its Obamacare exchange was alleged. Some MSMer somewhere has got to notice that every "what did you know and when did you know it" question asked of Christie regarding "bridgegate" ought to be posed of Oregon Governor Kitzhaber about his collapsed and fraudulent healthcare exchange.

Instead Milbank attacked the one guy who pressed the president in the past 15 months, and that guy rounded on him with right hook. Milbank showed he doesn't have a glass jaw by coming on my show and battling back, but the fight is on and in the open. Most of the Post-MSNBC-NYT gang is keeping their commitment to the guy they annointed despite his obvious and many failures, and they are doubling down on Hillary. CNN is trying to make up its mind. Fox News and most of new media super stars like Megan McCardle are having none of this "defend the president" nonsense and are peeling back the layers of failure on everything the president and his team have launched and touched at home and abroad.

It will get uglier before it gets more professional. And that is a good thing for people who like facts and not idol worship.