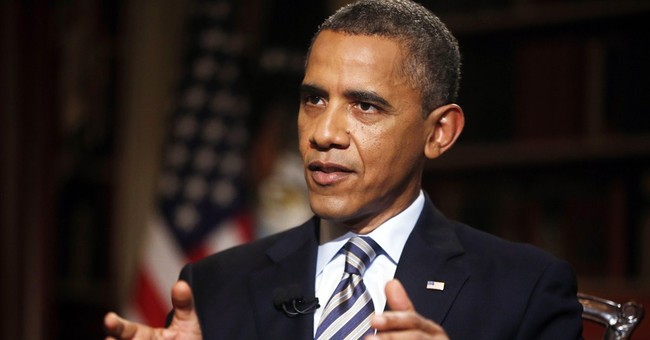 On Monday night's Sean Hannity Show I made two points.

The first is that the president would have us believe the only red line he won't erase is the one he drew for the Republicans. His strident "I won't negotiate" is causing his --and the Republicans'-- standing to plummet in the eyes of the public. We elected a six year old old?

This is the meta-problem in D.C.: The president has lost credibility, a casualty to the Syrian fiasco and a hundred missed opportunities to do anything remotely approaching a reach across the aisle. He isn't trusted, so to get the gears engaged and the city moving again, an infusion of third party trust is needed.

My second point was on how to import that trust and get the president and the Speaker out of their corners. I think it starts with a phone call from the president --to Williamsburg.

The Hon. Robert Gates is the Chancellor of the College of William and Mary and of course the esteemed former Secretary of Defense under both Presidents Obama and Bush. Gates was also the former CIA director and Deputy National Security Advisor. He probably ran the Parks Service and NIH at one point or another. He certainly ran during Texas A&M during one of his breaks from D.C., which is like running a couple or three agencies at once. Point is, he is one of those guys, one of the fabled "wise men."

There are a few left. My old boss from the Reagan White House Counsel's Office, Fred Fielding, is another. Some would say George Mitchell is a third though Mitchell was such an arch-partisan that even is über-abilities make it hard to believe he can operate above the clouds.

But here is no doubt about the stature of Secretary Gates, and if President Obama were to summon him from Williamsburg as well as the four senior legislative leaders --the Speaker and and Nancy Pelosi, Harry Reid and Mitch McConnell-- perhaps with their whips and certainly with their staffs, to the Roosevelt Room and commit himself to the process when needed for the final blessing, the deal is there to forge ahead.

Gates negotiated with the North Koreans in '94. Admittedly the NORKs are more reasonable than some involved in this stare-down, but it is valuable experience.

Repeal the hated and destructive Medical Device Tax and find a revenue replacement. Commit the Senate to up or down votes on various aspects of tax reform that will follow from the House on a quarterly basis as joint committee staff work them out. Delay the individual mandate until the exchanges are working at a level that at least a junior high gamer could help his parents negotiate --maybe three months, maybe six or more. Put the senior political appointees of the Executive Branch and all members of the Congress and their senior staffs on the individual exchanges, with a legislated subsidy, not one dictated by presidential fiat. Use a 15 month CR and debt ceiling with new sequester levels that rationalize the caps, with particular attention --and here is where Gates could make a truly unique contribution-- to the DOD's real needs. Chain the Social Security CPI, reform or abolish the IPAB, make a permanent fix to the reimbursement absurdity. Attack some tax loopholes immediately while leaving the big three until --home mortgage interest, state tax deduction and charitable contribution deduction-- until after the 2014 elections.

Oh, yeah, throw in immigration reform. Regularization for 95% of those who are here with a very long path to citizenship equal to the years it would take them to leave and come back via the long line waiting outside the country plus a very long, very high double-sided fence and expansive new visa caps for critical skills sets.

In other words, hit the restart button and get us through the 2014 elections. Gates is the guy who could actually pull that off. Maybe. But that "maybe" is a lot better than dancing on the cliff with a flat footed president and a Speaker who has to look over his shoulder even as he tries to lead.