Israel's Race Against the Clock 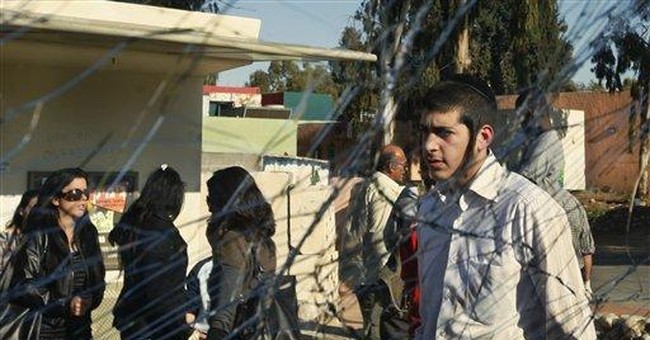 Hugh Hewitt interviews Michael Oren, a fellow at the Shalem Center in Jerusalem, professor in the School of Foreign Service at Georgetown University and author of “Six Days of War: June 1967 and the Making of the Modern Middle East.” Oren is also a reservist in the Israeli Defense Forces (IDF). He spoke with Hugh from his position near the Gaza border.

Hugh Hewitt: It’s very late in Israel, but I wanted to follow up on a couple of articles that you have written, one in the Wall Street Journal, one in the Los Angeles Times over the last few days. How important is success in Gaza to Israel’s security?

Michael Oren: I think it’s essential to Israel’s security. In fact, without that type of success, a million Israelis in the southern part of the country will remain terrorized by rocket fire. Today, we had 50 rockets in this area alone, including about three that smacked pretty close to my position from where I’m talking. And you know, life cannot go on in any sense normally with that type of constant terror.

Hewitt: In the Wall Street Journal piece of last week you wrote it’s also the last chance to reassure Israelis of the viability of a two-state solution. Can you expand on that a little bit for our American audiences as to what the stakes are of success here beyond the security of Southern Israel?

Oren: Well, it really boils down to this. Israel withdrew unilaterally from two borders—from the Lebanese border in May of 2000, and from the Gaza border in August of 2005. In both cases, what Israel received in return from its gesture was massive rocket fire from Hezbollah in the north, and massive rocket fire from Hamas in the south on the Gaza border. And now as part of the peace process, Israel would be asked to withdraw from most of the West Bank. The West Bank is adjacent to Israel’s major population and industrial areas. Just speaking personally, I live in Southern Jerusalem. If Israel were to withdraw from the West Bank, I would not only be in rocket range, I’d be in grenade range from the West Bank. So Israel would have to be very, very certain that if it did pull out there would be strong security guarantees. And if that security were to break down, Israelis would have to be assured that they could act to defend themselves. Every time they act to defend themselves, the international community wouldn’t come down and condemn them and force them to impose a ceasefire before their goals—their military goals—were achieved. And that is more or less what happened in Lebanon in 2006. So this is really the test of the peace process, what’s going on in Gaza right now.

Hewitt: Do you think that Egypt and, to a lesser extent (or maybe the same extent), Fatah are actually rooting for Israel to successfully topple Hamas in Gaza?

Oren: I think that many moderate Arab countries or their governments are rooting for Israel’s success. They understand. Not only are they afraid of Hamas as an Islamic extremist organization that’s closely linked to the Muslim Brotherhood and Egypt, but I think even more treacherous to these countries, Hamas is a proxy of Iran. And Iran is a very expansionist Islamic extremist regime. It is rapidly nuclearizing. And moderate Arab regimes, most of them which are Sunni Arab regimes— Muslim regimes—are deeply frightened of this, and would like to see Israel deal a decisive blow to Hamas, which would turn back the tide of Iranian expansionism which up to this point has been virtually unstoppable.

Hewitt:  …What’s the morale within the IDF with whom you are serving right now?

Oren: …Very high. The operation has gone well. Resistance has been stiff, there’s quite heavy fighting going on tonight, but a very strong sense of morale, in one sense that some of the mistakes that were made in 2006 would be addressed, and that Israel would be able to achieve that decisive defeat of Hamas, what it wasn’t able to achieve against Hezbollah in 2006. And this will turn the tide, not just “merely”—really assure security for a million Israelis along the border here, really lead to new possibilities for security for the entire region.

Oren: One of the principal mistakes was the assumption that you could take out rocket fire with air power. You may recall that in 2006, Israel waited really until the last days to send in its armies, by which time it was too little, too late. Now, Israeli ground forces have been actively engaged for several days, and they are reducing rocket fire. It’s a very, very difficult task. These rockets can be fired from tripods basically anywhere. Hamas has fired them from schools, from neighborhoods, very difficult to get—so they really have to go in there and ferret them out. In addition, another lesson of Lebanon: don’t make great pronouncements about your goals. The Israeli government in 2006 said its goal was to destroy Hezbollah, to disarm Hezbollah, and was unable to do that. Israel had captive soldiers in Lebanon; so the goal was to release those captives. And we have a captive in Gaza, Corporal Gilad Shalit. He’s been there, oh, for two-and-a-half years now. But the Israeli government has not said that the explicit goal of this operation is to free him. It has not said that its explicit goal is to crush Hamas. It wants to deal it a defeat but not eliminate it. That’s not the goal.

And so they’re being much more modest. And I think there’s also a sense that from Lebanon that Israel doesn’t have all the time in the world. There is an international diplomatic dynamic that is set into motion the minute fighting breaks out here. And eventually, the international community will step in and impose a ceasefire. So Israel’s also working against the clock. That’s a lesson of Lebanon.

Hewitt: Now another thing you wrote in The Australian column is that in response to all of these arguments that Israel is using disproportionate force, since it’s going to be condemned for it anyway, you wrote, why shouldn’t Israel smash Hamas promptly and massively, and reap the benefits in terms of self-respect, deterrence, and a respite for its embattled citizens? Is there a calculation, is Israel holding back right now?

Oren: Well, Israel is always holding back. We have a very, very large army. We have many hundreds, perhaps even thousands of tanks and cannons and aircraft, and we’re using only a small fraction of that tonight in Gaza. We often get accused of using disproportionate force here, and that D-word appeared on the first day of the war. Force is only disproportionate if the army had achieved its goals and was still bombing Gaza. We haven’t achieved our goals yet. We have to use the requisite amount of force to try to end the bombing of our cities. And Israel also has invested very, very heavily in civil defense. It’s one of the reasons our casualties are so low. The Palestinians have not invested a dime in civil defense. They have no bomb shelters. They have no air raid sirens. And Israel probably shouldn’t be penalized for having invested so heavily in the safety of its citizens. So there’s that feeling here.

Hewitt: There’s an argument made on this program by Glenn Greenwald of Salon that, look at the slaughter—you’ve got of hundreds of Palestinians versus a handful of Israelis killed. It’s got to be disproportionate. That’s from his articles. What do you respond to that?

Oren: My response is if you used that argument in World War II, America would have lost it. America had to use a massive amount of force to win the war. If it hadn’t used that force, it wouldn’t have won the war—and it was overwhelming force. There was no complaint about it, I think, among the American people at the time. The same thing is true here. We will use the amount of force that is necessary to stop rocket fire on our civilians….