Third Time's A Charm: One More Column On Twitter and Talk Radio 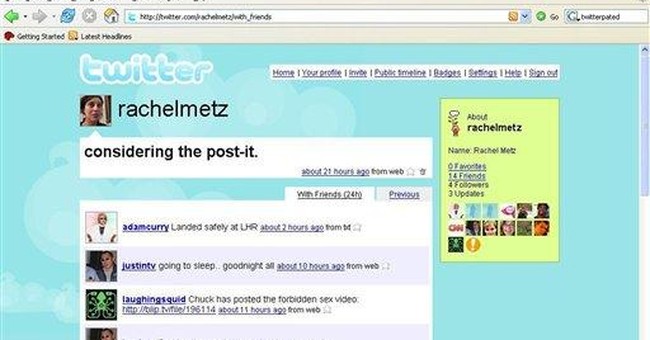 I have asked five candidates for the RNC chairmanship (and will ask Ken Blackwell when I interview him next week) how great they judge the tech gap between the GOP and the Dems. Each has recognized it, but some haven't taken even small steps to become personally involved in social media. Can you really lead a party into the new communications era if you haven't fully embraced its utility?

I think the same question can be asked of any leader in any organization that sells anything. If leadership hasn't taken steps to understand and fully embrace a huge shift in the technology of selling, how can he or she properly be thought of as a leader?

Which brings me to Twitter.com. This is a relatively easy to use new bit of social media, that, though jargon-heavy, yields to even a few hours of experimentation.

It is very, very powerful.

It is spreading very, very quickly. Conservatives and Republicans have to figure it out quickly.

Visit www.topconservativesontwitter.org as a starter. Note that there are thousands of people already involved and the site is a few weeks old. What does that tell you?

Note as well that you can sign up for a virtual mentor --which means someone to guide you in the ways of twitter specifically and new media more generally. Zero cost. Zero embarrassment. What is there to lose?

There is, by contrast, much to gain. Talk radio provides one easy example of the upsides of mastering twitter.

First, some jargon. A "hash tag" is simply a tag used by a group of people who want to follow a particular subject. Thus people who want to follow discussions of my radio show employ the hash tag #hhrs. In every short message they send over twitter.com they include the five symbols #hhrs and thus mark that message as pertaining to the show. Then they repair to search.twitter.com and type #hhrs into the search box and are instantly connected to a continuously updating stream of messages relating to the show. A virtual discussion group is instantly created that informs and improves the show.

I suspect that every growing radio show in America will have such a hash tag feature within a few weeks.

Now imagine you are an author trying to find out what folks think about your new book. Say you are Jon Meacham's whose wonderful new biography of Andrew Jackson, American Lion, is everywhere on sale. Simply tell people that the hash tag for the book is #JMLion and see what piles up on the feed. Tell every interviewer that you are checking the feed and want to hear what people say.

I suspect that every author interested in creating buzz about his or her book will be using hash tags and Twitter before long.

Now imagine a candidate who wants to attract followers and interact with them. That's right. A hash tag plus an ever widening circle of followers of his or her tweets.

As usual, Lileks led the way here, mastering and making very amusing tweets a staple of his daily creative typhoon, and the brains at RobinsonandLong.com quickly figured out that Lileks' tweets would draw eyeballs, so those short bursts of smiles are carried there.

It won't be long until every media outlet figures out that, like blogs, tweet streams are crucial for audience growth.

I write long form books, magazine articles, columns and blog posts. I have now begun to try and master the 140 character message worth reading. Each length is suitable to a different message, but they all matter, as do the platforms on which they are carried. Here's hoping the GOP --young and old, techy and Luddite-- figure out that they have to figure out social media. And very very soon.