Obama's Vision: "America Is No Longer What It Could Be, What It Once Was." 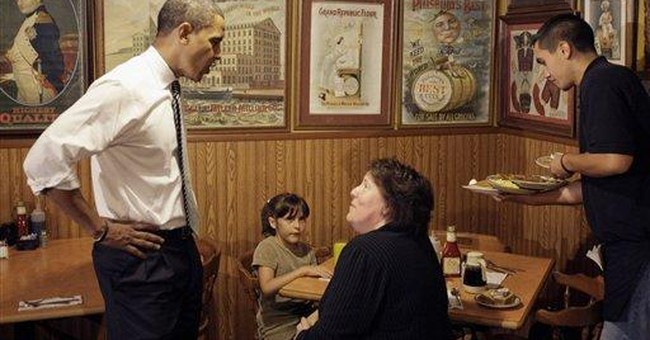 Study that for a moment. Let it sink in.

Ask yourself "What could Barack Obama possibly mean?"

Obama is ending a second dismal week in a row, a run of gaffes with few equals in modern American political history, and he was fixed on beating a retreat to Hawaii, only to be ambushed by a 7 year old.

Commentators immediately recalled the Dukakis-Shaw (the rape-murder of your wife question) and Kennedy-Mudd ("Why do you want to be president?") moments, but hesitated: In those cases candidates had been felled by adults, tripped up by sneaky journalists hiding their traps behind crafty questions.

Obama was felled by a second grader. Asking the same question in essence as had Roger Mudd of Teddy Kennedy. How could Obama not have an answer at the ready?

Or perhaps Obama just meant that the terrible years under Bush with all the secret arrests, torture and unjust invasions were coming to a close, so we could return to the glory years of Bill Clinton, Madeline Albright and Sandy Berger.

No matter how you analyze it, Obama's latest flub is in the "major" category, and coming after his decision to triple down on the inflate-your-tires to energy independence platform, packed Obama off on vacation in a decidedly sour mood.

There is little doubt that Obama can hardly wait to get to Geneva Switzerland on September 2 to party with George Clooney and other expats indifferent to their carbon footprints.

Before we let the four year senator from Illinois head off into the Pacific sunset, though, we should turn his declaration on America's decline over a few times.

Rather than simply assume that Obama is unable to survive untethered to a teleprompter, we have to at least consider that Obama meant what he said, and that he genuinely believes the country to be not only badly broken, but unmoored from its essential nature: "No longer what it could be. What it once was." It is the sort of critique that cannot be classified with a simple rejection of George Bush and his policies or even of the general conservative direction the country has been moving in since 1968 and especially since 1980.

Obama's verdict --delivered in a few words to a very young American-- is that America has gone radically wrong.

And that it will require radical change.

Perhaps we had an unscripted moment of candor, a declaration from the most radical nominee of a major party in history that he is not about a gentle turning towards the left, or even a major shift in legislative priorities or security policy.

Let's take Obama at his word to a child: If he is elected, Obama sees his job as reshaping America in a fundamental way.

In a radical way.