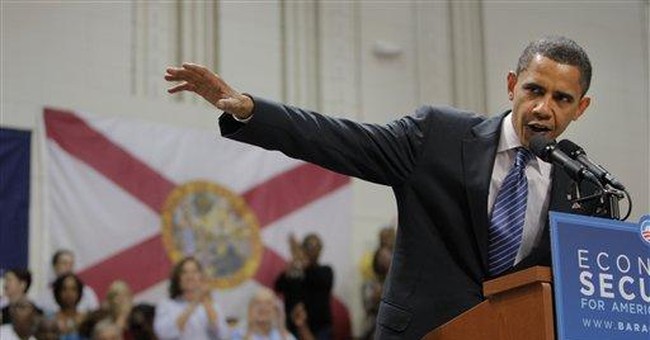 The blast-off didn't materialize, and the Dalibama found his numbers falling in Ohio, Pennsylvania an Florida. Even worse, the late night comics were having a field day with his "inflate your tires, end the energy crisis" pronouncement.

Michelle Obama returned to the political lists, and is her habit, she portrayed a grim America the outlines of which just don't register with most voters, even among many of the single moms and working mothers she was appealing to. Mrs. Obama told a crowd she didn't want Obama to run, but then changed her mind:

But then I had to take a step back and take off my "Me" mommy hat, and put on my "Us" mommy hat. And I started thinking about the kind of world that I would want to hand over to my daughters. I had to think long and hard about wanting them to be able to dream of anything for themselves, you know, wanting them to be able to imagine any kind of future for themselves, and know that they would have the kind of support from this country that would allow them and all of our children to achieve those dreams. And then I realized that if that's the kind of world that I wanted for my girls, then I had to do everything in my power, make every sacrifice, to make it possible. So that's why I'm a woman for Obama. That is why.

No imagining "any kind of a future" without Obama? Barack's not the only one with some ego on display this week.

With the pressure on Obama did what he has done before --he played the race card, asserting that John McCain would try and scare voters because of Obama's name, his insufficient patriotism, and because Obama doesn't look the presidents on the dollar bills. Put aside the gaffe about presidents being on dollar bills --just another in a long string from Mr. 57 States-- and note that this is the second time in recent weeks when Obama reflexively played a race card. At a Florida fund-raiser in June, Obama said this:

John McCain pushed back, hard, as he should and hopefully will again and again. There have been lots of occasions over the years to disagree with Senator McCain, but no one has ever before accused him or running a dishonorable, racist campaign, and his anger is genuine. The accusation of racism is a slander, and McCain won't put up with it, nor will most voters. Obama's sensitivity to being compared with light weights Brittany Spears and Paris Hilton --"fame without portfolio" is how McCain surrogate Lindsey Graham put it in noting the tie that binds the trio-- led him to throw down the race card, an unforced error on his part, worse even than the demonstration of empty-suitedness with his "inflate your tires to energy freedom" baffler.

McCain won the week, or rather Obama lost it. Even the MSM began to notice the "all hat, no cattle" aspect of Obama's campaign, asking "What has he ever done? What does he propose to do, specifically?"

And as a backdrop to it all, an emerging an undeniable victory in Iraq that, had Obama had his way, would not only have been prevented but which would have seen genocide in its place.

Obama doesn't understand the war, and increasingly seems not to understand the American voter. The former is the most important issue and Obama cannot bring himself to admit and celebrate the unfolding victory, and the latter doesn't live in Germany, and deeply resents unfair accusations of racism.