H. Sterling Burnett
|
Posted: May 09, 2020 12:01 AM
Share   Tweet
The opinions expressed by columnists are their own and do not necessarily represent the views of Townhall.com. 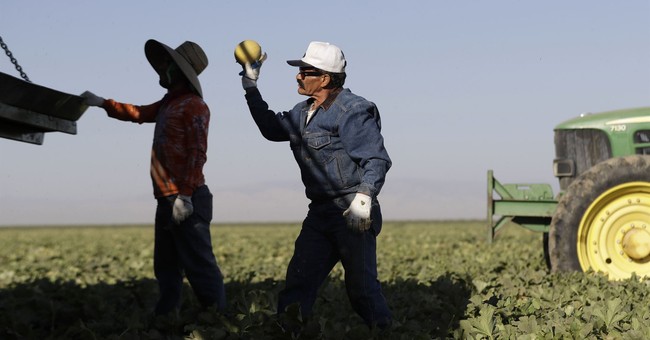 Amidst the human tragedy and media storm that is the coronavirus pandemic, it’s easy to lose sight of the fact that persistent threats to human health and well-being that pre-existed the COVID-19 still remain.

Hunger and malnutrition, constantly simmering threats that only rarely get the attention of the pandemic de jour, kill and harm far more people every year than the coronavirus. This is worth remembering as the world recovers from the coronavirus crisis and life returns to a semblance of normality.

Whatever the new normal will be, we should sustain and increase efforts to reduce premature mortality from starvation and the effects of malnourishment, which often retard normal bodily and mental development, limiting the ability of millions of people to flourish each and every year.

Fossil fuels are the foundation of modern agriculture. Using fossil fuels to power the tractors and trucks used to plant and harvest crops and deliver them to market, and as the feed stock for the chemical pesticides and fertilizers used to grow ever greater amounts of food, the world’s farmers currently produce more than enough food to feed the earth’s seven billion people.  Indeed, according to the United Nations, the number of people suffering from persistent hunger has declined by two billion since 1990. What’s more, research shows there is now 17 percent more food available per person than there was 30 years ago

Where malnutrition, famine, and starvation still occur—mostly due to broken distribution systems due to wars (civil and otherwise), poor infrastructure, flawed political and economic institutions—totalitarian regimes who use starvation as a political tool are primarily to blame.

However, in order to feed the nine billion people expected to populate this planet by 2050, we will have to triple food production. If all farmers adopted the most modern farming practices with high inputs of fertilizers and pesticides, it might be possible to double crop production on the same amount of land, but not triple it.

Among the biotech innovations currently being developed, tested, or marketed that could help reduce hunger and malnutrition are genetically modified salmon, rice, and moths.

Seafood accounts for approximately 20 percent of the animal protein consumed annually, yet many fish stocks are in decline. With this in mind, in mid-2019, the U.S. Food and Drug Administration (FDA) approved the importation of AquaBounty’s genetically modified Atlantic salmon eggs to be raised in the United States. The bioengineered fish grow to maturity twice as fast as wild salmon, meaning they can be harvested and replenished much more quickly. Raised in controlled, land-based facilities and bred to be sterile, the fish are incapable of affecting wild salmon. Aquabounty’s salmon could become the world’s most sustainable salmon having a smaller environmental footprint than traditional salmon farming or commercial harvesting on the open ocean.

Rice is a staple cereal grain for a large number of the world’s population. Researchers at the Chinese Academy of Sciences are engineering a strain of rice that is resistant to extreme heat for extended periods of time while producing 10 percent more yield. At normal temperatures, the transgenic wheat produces 20 percent more grain. If this rice is ultimately brought to market, it could prove a game changer for world rice supplies, even if the planet continues to modestly warm.

And biotech company Oxitec has developed a modified version of the diamondback moth, which could lead to the pest’s extinction. Diamondback moths, the most resistant of all insects to pesticides, can wipe out entire fields of cold weather crops including, broccoli, cabbage, canola, cauliflower, and kale, resulting in billions of dollars in lost crops each year. The Oxitec diamondback moths contain a lethality gene, which when they mate with moths in the wild, prevents the female offspring from developing, so they die as larvae, with half male offspring in each generation inheriting the “lethality” gene meaning the entire population declines over each generation.

Unfortunately environmental extremists have targeted genetically modified products for extinction, fighting to delay the approval of or suing to block the introduction of bioengineered agricultural products, saying genetic engineering is like “playing God.” In truth, unlike crops developed through traditional cross breeding techniques, genetically modified foods are among the most extensively studied scientific subjects in history. The National Academy of Sciences, the World Health Organization, the American Medical Association, and indeed, every major research body that has looked into the health and safety of genetically modified crops, have endorsed their use.

If environmental fear-mongers successfully block the use of bioengineered agricultural products, as world population grows and the climate changes, they will be condemning millions of people to unnecessary suffering and early deaths—now that would be playing God (or the devil) with a vengeance.

H. Sterling Burnett, Ph.D. (hburnett@heartland.org) is a senior fellow on energy and the environment at The Heartland Institute, a nonpartisan, nonprofit research center headquartered in Arlington Heights, Illinois.