Government Tries to Kill Holidays, While Its Regulations Kill People 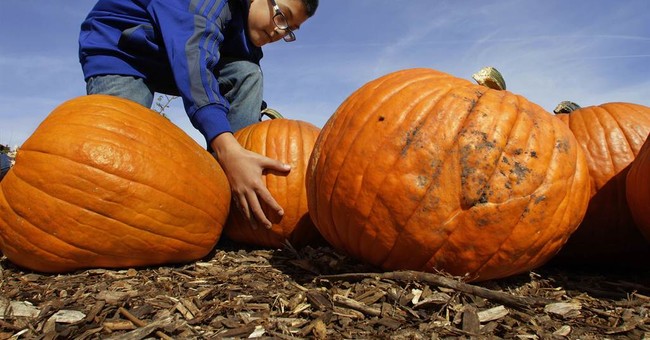 Just days before Halloween, the U.S. Department of Energy (DOE) warned that the holiday’s ever-present jack-o-lanterns are killing the planet. Yes, you heard that right. Big government minions are trying to ruin what should be a joyous holiday for kids (and adults too) with another climate scare story.

It’s not enough for brainwashed teachers to send kids home to harass their parents into recycling, even when the process uses more energy or produces more waste than using virgin materials, or to stop eating meat because a PETA representative was invited to school to tell students eating meat is murder and cows’ farts are killing the planet.

Now, the government is actually complaining rotting pumpkins left over after Halloween release methane, a greenhouse gas, into the atmosphere. Even though the best evidence suggests natural processes, not human emissions of greenhouse gases, drive all but an immeasurably small smidgeon of climate change, DOE wants to stop kids from enjoying pumpkin-carving in a fight against what even the worst predictions suggest would be only a modest warming (and largely beneficial at that) 100 years from now.

In a couple of weeks, DOE or the Environmental Protection Agency (EPA) will probably try to ruin Thanksgiving by proclaiming the turkeys raised for holiday meals produce copious amounts of poo, which produces methane, and thus is killing the planet. EPA has already tried to ruin Christmas for the poor by attempting to pass regulations banning inexpensive Christmas lights, which the agency sees as real energy wasters.

And let’s not forget the deadly risks from fireworks shot off to celebrate each New Year’s Day or Independence Day—not the risks of injury, but the destruction of the planet. All those firecrackers, rockets, Roman candles, and smoke bombs release carbon dioxide into the atmosphere. The environmentalist fun-haters can’t be expected to put up with that for much longer.

The Obama administration—by this point an almost wholly owned subsidiary of the radical, misanthropic, environmental movement—clearly won’t be happy until it ruins each and every holiday and everyone starts wearing hair shirts, ceases bathing, and lives a quiet, miserable life shivering in the dark in the winter with the furnace turned off and sweltering in the summer with the air conditioner ripped out. Penance requires self-sacrifice and pain, and environmentalists and their government lackeys want modern society to repent the sin of using fossil fuels in particular and being relatively wealthy.

Government regulations, not holiday celebrations, are the real killer. While warning of fanciful climate risks from rotting pumpkins and Christmas lights, EPA and other assorted agencies are taking real lives every time they pass a new, unnecessary, expensive regulation.

Poverty is by far the biggest killer in the world. Hundreds of millions of people lacking inexpensive, reliable energy, readily available health care, and abundant, nutritious food suffer more premature deaths, have higher infant mortality and lower disease survival rates, and have shorter lifespans, when compared to wealthier nations and people. That is an undisputed fact.

EPA regulations ignore the link between wealth and health. Carbon dioxide is a non-toxic, naturally occurring gas posing no threat at all to human health. (And it’s dishonest in the extreme to call carbon dioxide “carbon” as if this gas essential to all life on Earth were some sort of dirt.) Yet, EPA’s Clean Power Plan (CPP) would force radical cuts in carbon dioxide emissions from the nation’s power sector, which will raise energy prices substantially. The Energy Information Administration has pegged the cumulative costs of the rule through 2030 at $1.23 trillion in lost GDP (in 2014 dollars).

That makes CPP a truly deadly disaster. The U.S. Office of Management and Budget (OMB) has estimated every $7.5 million to $12 million in regulatory costs imposed on the economy results in a life lost, so CPP could result in between 102,500 to 164,000 early deaths.

When government regulations raise energy costs, they increase unemployment, decrease disposable income, and reduce the number of people covered by health insurance—and each of those results kills people. The government should leave us to celebrate the holidays in peace and skip the scare stories. DOE is the real monster this Halloween.