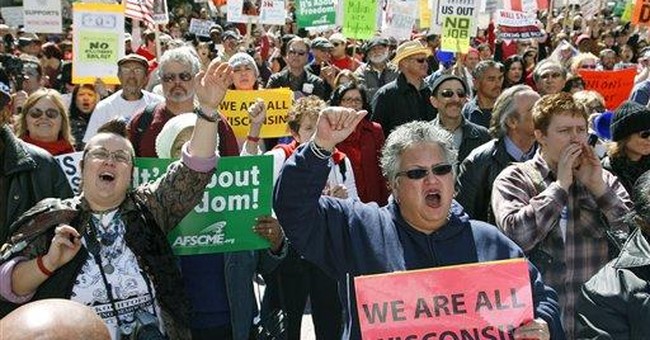 A hundred years ago, teachers formed unions. At the time, too many teachers lost their jobs for reasons such as pregnancy or gaining too much weight, and wages and working conditions could be substandard.

Today, by contrast, union-negotiated employment policies protect mediocre and bad teachers from consequences for abysmal performance and even criminal activities. Teachers who feel misrepresented and have no desire to belong to a union are nevertheless forced to pay for these organizations.

Here are five reasons states should change their laws regarding teachers unions and education job protection.

Number 5: Last in, first out (LIFO) provisions ensure no matter how effective a teacher is, when the time for layoffs arrives, whoever was the last to walk in the door is the first one out. These practices, long acknowledged as unfair to students and teachers alike, stifle creativity and innovation as newer teachers are shoved out the door year after year across the country. This year all non-tenured teachers, about 100 of them, lost their jobs because of budget cuts in the Willmar School District in Minnesota. The effectiveness of their teaching was not a factor. In several instances in various states, teacher of the year honorees have lost their jobs this way. Good teachers are losing their jobs for all the wrong reasons, and bad teachers continue to disserve their students and the taxpayers who pay their salaries and benefits.

Number 4: Mandatory union dues require teachers to pay for unions and their political activities even if they don’t want to, or to pay an “agency fee” if they opt out of the union. The U.S. Supreme Court is reviewing the constitutionality of mandatory union dues in Friedrichs v. California Teachers Association. The plaintiffs argue mandatory dues violate their freedom of association, which should include the freedom not to associate with a particular group. These public school teachers also say mandatory dues violate their First Amendment rights because unions spend the teachers’ money to support political causes with which the teachers don’t agree.

Number 3: Many teachers feel misrepresented by their unions and disagree strongly with their unions’ comments on social issues. Case in point: Hundreds of teachers in Staten Island, New York planned a counter-protest after United Federation of Teachers (UFT) leaders marched alongside Al Sharpton during a protest against police brutality in the wake of the Eric Garner incident. A group of teachers printed more than 600 T-shirts expressing support for the New York Police Department, to be worn by teachers on the first day of classes, but the counter-protest was called off under pressure from the city’s Department of Education and UFT.

Number 2: Teacher tenure and job protection laws make it exceedingly difficult to remove an ineffective teacher or even one guilty of misconduct. A California court’s Vergara decision, currently under appeal, required specific changes in California law, including eliminating teacher tenure, seniority, and teacher-dismissal procedures that protect incompetent teachers and impede students’ education. A case similar to Vergara v. California is underway in New York. For now, however, taxpayers, parents, teachers, and students across the country watch in dismay as ineffective teachers collect paychecks and even sex offenders grab large sums of money on their way out of a district because job protection laws make it easier, less time-consuming, and less expensive to pay off teachers guilty of misconduct.

Number 1: Each election cycle, teachers unions spend millions and millions of dollars – taxpayer dollars – protecting their interests. Teachers buy and sell politicians just like any other special-interest group does. The captive politicians then negotiate sweetheart deals for the unions – contracts giving teachers union members anything and everything, even unlimited free plastic surgery, including breast implants. Spurred by the unions’ hunger for more dues-paying members, the number of administrators and other non-teaching personnel continues to rise far out of proportion to student enrollment. Collective bargaining agreements are written like celebrity contracts, yet union leaders claim education funding is inadequate.

Teachers unions should not have more power over education than parents, taxpayers, policymakers, and teachers, but they do. States must reform their laws so ineffective teachers can be removed, effective teachers can stay, and teachers have a real choice as to whether they want to join a union. It will take a serious effort to do so, given the unions’ massive political power. But an education advocate can dream, can’t she?