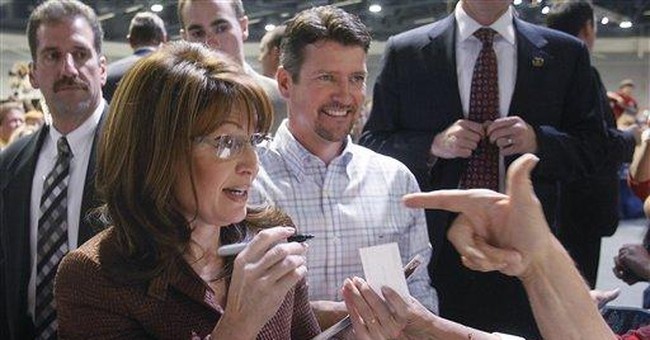 Of all the names thrown about as potential VP candidates for Sen. McCain, Governor Palin was the only one who matched the current zeitgeist which drives so much of the enthusiasm for Sen. Obama’s candidacy. Her homerun speech confirmed the point, and constituted the single best critique of the Obama campaign to date.

Now even the mainstream pundits are waking up to the fact that selecting her wasn't about getting "Hillary voters” (though some of them will certainly find her appealing, particularly after her savaging precisely for being a woman by the media), but thinking even bigger than that. Having Palin on the ticket helps capture the much larger populist, reformer zeitgeist - both male and female -- that has had it with condescending elites and politics as usual in Washington

Sen. McCain obviously needed to pick someone who would reassure the conservative base that they could trust McCain, so they would turn out for him. But he also understood that what the VP had the potential to capture was not just a state or a region, but a cultural mood. To that end, he needed someone who was younger, a "first" (not as a pandering to diversity, but as a resonant symbol that we are going to change the way we do things and reaffirm our best selves), had executive experience, and who, critically, would embody an opposition to the culture of Washington.

Gov. Palin was the only one who did all those things, and the pick is therefore resonating mightily. Why she evokes such strong feelings, and what that implies, however, is still not fully appreciated.

The first response from the Democrats -- that having Palin on the ticket negates McCain's "only" issue: Sen. Obama’s experience deficit – indicates they don’t know their own strengths, or weaknesses.

The most telling arguments are not about Sen. Obama's lack of experience, compared even to Gov. Palin, but his extreme liberalism and questionable judgment (e.g. his long associations with Rev. Wright and William Ayers, his vote regarding babies born alive in abortion procedures, or his thinking that promoting a withdrawal from Iraq from a position of weakness is the same as suggesting it from a position of strength). That is followed by his character, which was, importantly, initially perceived as an authentic reformer not yet sucked into politics as usual, but is increasingly seen as a deeply ambitious politician who plays hardball, puts up with corruption, and who will change positions in a heartbeat. While his lack of experience may amplify those concerns, if his inclinations were more in synch with Americans generally, a lack of experience would matter less.

In short, it isn't just about change; it's about what kind of change. What helps draw this distinction is that Gov. Palin is a living foil to the Sen. Obama we are coming to know. The McCain campaign must be looking forward to contrasting Obama's association with Tony Rezko and passive acquiescence to Chicago politics to Palin's active refusal to compromise her ethics and track record of taking on corruption; Obama's ultra-extreme views on abortion to Palin's moral responsibility in not aborting her Down's Syndrome baby (and ditto for her daughter); and his fantasy blather on the capacities of alternative fuels v. her real life achievements in energy production.

In short, Gov. Palin does an excellent job of embodying the zeitgeist and symbolizing the change we really want - a grounded real person (think Cincinnatus), who understands politics but isn't about making a career of it, a doer not just a talker, who has high principle, a positive vision, and embodies our best selves.

That prototype fit Sen. Obama when less was known about him, but becomes harder to maintain the more we know. And the rift between elites and ordinary Americans – something Obama was clearly sensitive to in his careful omissions during his convention, will now, in the wake of Gov. Palin’s daughter’s pregnancy, only become more visible as contemptuous commentators, who would laud a teenager terminating her pregnancy, cannot fathom a framework that says that if you create a life, you take responsibility for your actions and have the baby, and either create a home for it or give it up for adoption.

So here’s an unconventional prediction: in this race, unlike those before, the Vice President will actually matter, particularly in what they capture relative to that anti-Washington sentiment. Barring major mishap, here’s a second unconventional prediction: this isn’t going to be a close election, but will look far less like 2000 or 2004 than it does like McGovern in ’72. The media elites and students will still like Obama, but the rest of the country will become concerned that, as his selection of Sen. Biden as his VP indicates, that he isn’t about genuine change at all, but the same tired liberalism, whereas McCain/Palin really are closer to the authentic change we need.

One more: This election has been a running testament to the failure of conventional wisdom; if House and Senate Republicans figure out that the change the country really wants is about dispensing with the endemic "business as usual" mentality, they’ll provide their own surprises to conventional wisdom as well.