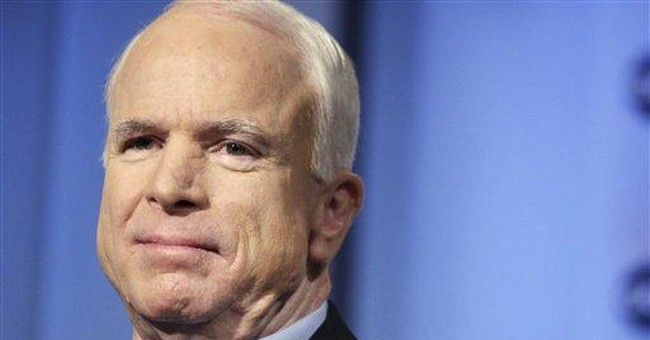 Last week was one political roller coaster ride after another. McCain shook up the nation by helping to force communications between the two parties on the economy. Like a policeman stepping into the middle of a domestic squabble, he risked the possibility that he could be attacked by both sides. As the week began, public opinion was drifting back toward the Democratic mantra - a John McCain presidency is the same as a George Bush third term. I am convinced that at gut level, McCain intuitively sensed that he had better shake things up or the race was over.

The financial crisis gave McCain an opportunity to show the nation his heart, his values, and his courage. As a result he proved himself to be a true maverick in three distinct ways - he bucked the power structure of both parties, he threatened not to debate with Obama at all, and he refused to take credit for the negotiations in the debate.

Several of McCain’s detractors have portrayed him as erratic, desperate, or just mean-spirited. These critics want him to just fade away quietly. They cannot understand the “by any means necessary” spirit this 72-year old possesses. As I have already alluded, Senator McCain realizes that if he is seen as a self-serving, traditional “Bush” Republican, he will not only lose the White House, but an entire generation of middle aged and younger voters will see the “conservative revolution” as a failed ideology.

No other Republican on the political scene today could have maintained this close a contest with the Obama machine. Democrats have cast this election as being about more than the readiness of their candidate. They say that it is a referendum of the conservative approach to government. Time will not permit me to flesh this argument out in detail. It is sufficient to say, that the anti-conservative rhetoric of Obama and Biden is like throwing red meat to ravenous liberals and those from the far left. In addition, Senator Obama’s money and the nation’s disgust with the current administration gives the Democrats a distinct advantage. Now that Senator McCain has had the epiphany that he has to let the nation see what makes him tick, he has to make up the script as he goes.

For these reasons, I believe that Senator McCain had to show three things in this debate – energy and passion, vision, and experience. All three of these things he accomplished. Why energy and passion? His age has been the premise of endless jokes and a concern of most Americans who do not feel as though Sarah Palin is currently qualified to be president. Therefore, he has had to show everyone that negotiations and pressured activity were not too much for him physically. The Obama line that “McCain would have to do more than one thing at a time” was a subtle slam on McCain’s age.

Although I think McCain gained rank this week, he could have done a little more. McCain’s economic address did not educate those people who are uninformed. For example, he could have explained the difference between the savings and loan bailouts of years ago and how they were different than the problems of today.

Another area of improvement for McCain would be to help the typical citizen understand his philosophy. In the debate, the “professor” in Obama beat the “maverick” in McCain by connecting with the average Joe, even though his explanation of the economics of the day was laced with flawed class-struggle rhetoric, making business the ultimate villain in the drama. It would serve John McCain well to explain how an increase in corporate taxes will take more out of the average person’s pocket than his approach would. We have heard enough of the nuance of the tiers of taxes.

While McCain looked focused and alert, his demeanor could have also been seen as gruff and angry. In the next debate, he must be warm and inviting. Obama’s appearance was perfect to engender confidence. His graying hair gave an air of experience. He was cool and in control vs condescending. McCain also did not look at Obama during the debate. This was as much a sign of disrespect as Obama calling McCain “Jim.”

This week, McCain is making a strong case for his candidacy by his decisive action in the time of economic crisis. He showed that he is an out-of-the-box change agent without bipartisanship. The next debate can act like a recruitment poster for his navy. It is time to stand the rails and be seen as a leader who is ready for engagement.