Hank Adler
|
Posted: Dec 10, 2020 12:01 AM
Share   Tweet
The opinions expressed by columnists are their own and do not necessarily represent the views of Townhall.com. 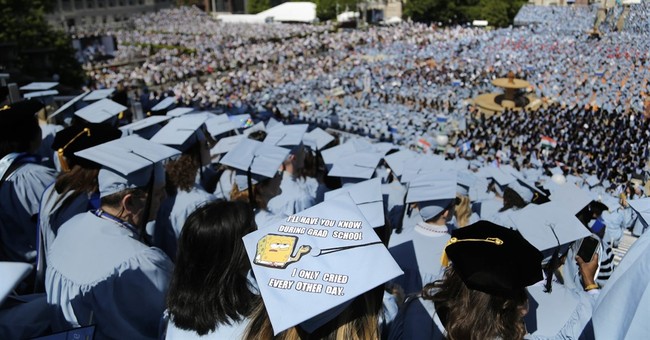 Felipe’s family saved for his college from the day he was born. Felipe’s family never owned a new car and rarely took vacations. Felipe worked every weekend during high school. To save money, Felipe went to community college before he went to Columbia University to complete his degree. He graduated from Columbia without student debt.

George’s family always had new cars and always took family vacations. George never worked in high school and when it was time to go to college, he went directly to Columbia for four years. He borrowed every penny to go to college. His student loan upon graduation was very substantial.

In the wonderful movie The Scent of a Woman, Al Pacino delivers a forceful soliloquy about how a good kid is going to be punished because of his superior ethics and how a bad kid is going to be rewarded for no other reason than his wealth. Pacino says to the headmaster: “And you are going to reward George!”

Such is the message from those advocating for the elimination of student debt. The hero is Felipe and they are rewarding George.

Indirectly, every student and parent who saved for college, worked their way through school, or participated in some program or went to a community college to avoid student debt garners no benefit from being responsible. This is not to say that all students with significant student debt were irresponsible, but it would be hopelessly unfair to ignore the college graduates without debt and blissfully reward college graduates with debt.

What has the current generation of students with student loans done to differentiate themselves from those who have paid for their college?

What do we tell Robert and Mary who joined the military for four years so that they would have access to the GI bill? What do we tell Omar and Ideena who taught at inter-city schools after earning their degrees in education to achieve forgiveness of their student loans? What do we tell Talib who borrowed through a bank to pay off his student loan and achieve a lower interest rate?

What do we tell the university graduating classes of 2025 and beyond who would get nothing from having the loans of the prior generation canceled? Orel and Marlene are sixteen years old and considering every alternative to be able to attend college and achieve their degrees. Are they “un-special”?

And what do we tell everyone without a college degree? The amount of funds the government has to spend are not infinite. Would this money be better spent on current education opportunities for individuals currently without a degree?

There was no one with a gun forcing students to take out student loans.

So many students thought through the issue of debt and for that have tiny or no student loans. They cannot be asked to pay for those who borrowed.

Are there things the government can do for those with outstanding loans? Yes, interest rates can be reduced, and payment terms extended. Few would be bothered with those types of changes.