And Where To Tomorrow Mr. Trump?

Hank Adler
|
Posted: Jul 01, 2016 12:01 AM
Share   Tweet
The opinions expressed by columnists are their own and do not necessarily represent the views of Townhall.com. 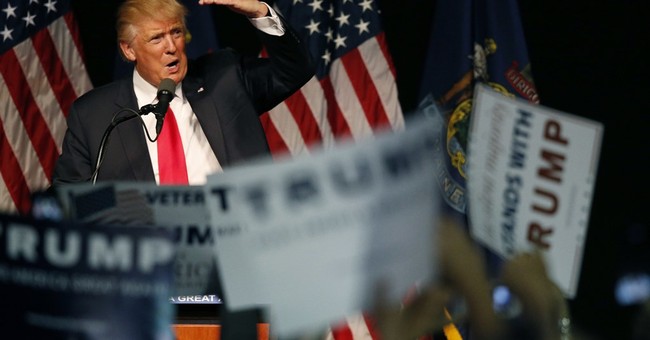 Donald Trump on Tuesday removed any remaining doubt that the much-hyped GOP “loyalty pledge” he and his fellow Republican rivals signed last fall is essentially meaningless. “No, I don’t anymore,” the celebrity billionaire said at a CNN town hall when asked whether he’d still support the Republican nominee regardless of who it is. “We’ll have to see who it is.”

Lewis Carroll from Alice in Wonderland: “When I use a word,” Humpty Dumpty said, in rather a scornful tone, “it means just what I choose it to mean—neither more nor less.”

Donald Trump garnered 13.7 million votes in Republican primaries. Senators Cruz & Rubio along with Governor Kasich garnered 15.2 million votes. Is Mr. Trump attempting to drive their followers along with those of Jeb Bush to Secretary Clinton? It is one thing to be fighting the establishment and quite another to be trying to drive votes away instead of seeking votes. Maybe his is the most brilliant strategy of all time, likely not.

In the real estate business, one can go from deal to deal. One might do a single transaction with a single landowner in a lifetime. One can walk away from a transaction and no one is hurt. One can win a sensational victory and do as many victory dances as one wants because the deal is concluded and there likely will be no next deal.

Should Mr. Trump be elected to be the President of the United States, he will face a Congress without a single senator whom he helped get elected, every Democratic Senator against and a significant portion of the Republican Senators having determined not to endorse him. He speaks to be his ability to negotiate. He best be able to negotiate with elected politicians better than he appears to be doing with Judge Curiel in San Diego.

The difference between Congress and a real estate transaction is that Mr. Trump would have to negotiate over and over with the same individuals. Perhaps Mr. Trump cannot or will not ever put up a flag of surrender, but a flag of truce with Republicans is an idea he should consider.