A Bridge To Better Health Care Releases Its Key Principles 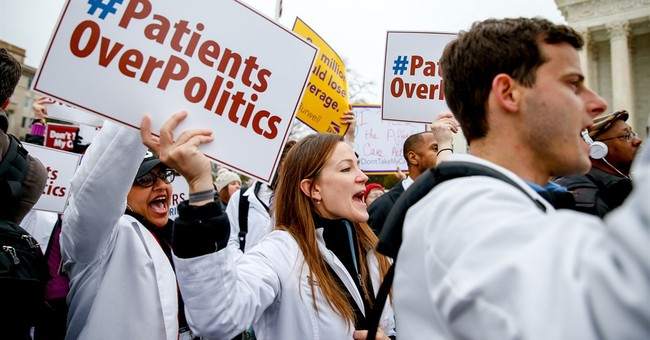 Since it was signed into law in 2010, the Affordable Care Act has been a complicated mess and has been anything but affordable. Premiums and deductibles have increased, people couldn’t actually keep their plans or doctors, it has been a source of great waste, and this year the law caused a host of problems for Americans when it came time to file tax returns. Democrats have admitted that there are major issues with the law. It has been so bad that the Administration has been forced to make 49 changes to the law, 30 by unilateral administrative action, 17 by Congress, and two by the Supreme Court.

We believe that America does indeed deserve better. Our new initiative, A Bridge to Better Health Care, is determined to replace the Affordable Care Act with common sense reforms that keep the promise of affordability and choice while empowering patients and doctors. In order to achieve this goal, we must focus on laying the foundations until we have consensus on a better plan and the political environment to implement it. We can’t just settle for short-term fixes. Many of the biggest harms are yet to come, with fines doubling next year for individuals who don’t buy mandated insurance and all but the smallest businesses facing penalties and fines from the employer mandate. And that doesn’t count the significant increases to premiums and deductibles if one does comply. Unfortunately, many of the short-term, targeted fixes interest groups are lobbying for, such as repeal of the medical device tax, will only make fully repealing and replacing the law more difficult in the long run. Rather than whittling away at the law, we should educate Americans about the many harms yet to come and the principles that should guide us in developing a patient-centered reform alternative.

A Bridge to Better Health Care, a project of Independent Women’s Voice, has laid out five guiding principles we believe any repeal and replace effort must adhere to. Our principles include: protecting people, ensuring consumer choice and affordability, respecting the economy, working at the state level, and respecting the Constitution.

First, it is essential to protect people who have been adversely affected by the Affordable Care Act, through no fault of their own. Fixing our complicated health sector is a long-term proposition, but a decision in the Supreme Court’s King v. Burwell case looms large in the short-term. Many families and individuals who were forced off of their plans and onto expensive policies that they could only afford with the help of subsidies could end up losing their insurance. We must provide a “bridge” or “off-ramp” plan over the short-term that protects these people and ensures no further harm as a result of decisions by the Obama Administration in implementing the Affordable Care Act. Until the law is repealed, our goal is to protect the estimated six million people who would lose their subsidies and likely their health insurance if the court decides in favor of the petitioners. We should hold them harmless as we transition to a better structure and to pave the way for more long-term policy changes.

In addition to guaranteeing protection for people who need it, focus must be placed on giving patients greater choice and control while bringing down the cost of health insurance for ALL of us. Simply shifting costs from one group to another does not make health care or health coverage affordable; systemic reforms that give power to patients by encouraging innovation and a full spectrum of health insurance choices, combined with transparency on health costs and quality, are the keys to affordable health care. Market competition that gives power to consumers and returns decisions over health care to doctors and patients are better reforms. The Affordable Care Act was anything but. It’s time we had a health insurance that everyone can afford.

To achieve these goals, our health sector must respect the forces of a free-market economy. Encouraging economic growth, or at least not having policies that discourage it, should be a goal of federal legislation or action as it is a strong economy that allows us to be as generous a society as we are. Therefore, we reject the intrusion of the federal government into business operations and hiring in the form of mandates, penalties, and taxes that harm our economy. Health care is a big part of our national economy – about one sixth – but we should take care not to damage the other five-sixths of our economy. With greater economic growth, more jobs, and higher wages, more Americans will be able to buy the health insurance and services of their choosing.

One of the flaws in the Affordable Care Act was its failure to treat individual states with individual needs differently. All health care and health policy decisions should NOT be made in Washington, D.C. Health insurance regulation should be largely led by the states. We believe each state is unique, and each should be free to design, implement, and adapt policies that best serve the unique mix of urban, suburban, and rural communities as well as the age, socioeconomic, and health status of its citizens. State leaders shouldn’t just be puppets, forced to carry out one-size-fits-all decisions made at the federal level. State leaders have to be accountable to the people who elected them. Regulation of health insurance must be returned to the states.

Finally, health policy decisions must respect the Constitution. The federal government shouldn’t be able to punish people for failing to buy a private product; it sets a terrible precedent. Yet that is exactly what the individual mandate of ObamaCare does. The mandate, Justice Roberts’ tortured reasoning notwithstanding, is not consistent with the idea that Americans should make decisions for themselves. Instead, health reforms should restore freedom to Americans and limit government’s role in micromanaging our health care choices and decisions.

Despite what some political leaders such as Senate Democratic Leader Harry Reid have claimed, the Affordable Care Act has not been a “smashing success.” It remains unpopular and soon it will have been changed for the 50th time. It has terminated coverage for millions of people that were satisfied, with millions of additional terminations to come, raised insurance costs, affected employment, and broken doctor-patient relationships. Republicans have been hard at work developing a series of ideas and proposals. Our Bridge to Better Health Care principles should guide the effort as we aim to replace a complicated mess with a better, simpler, and more sensible solution.