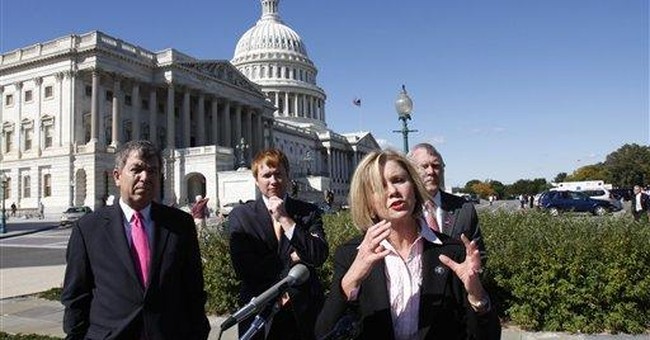 Following the Federal Communications Commission’s party-line adoption of a new internet regulatory scheme, conservatives are already plotting to challenge and oppose implementation of the new policy at every turn. Critics say the still-unpublished “net neutrality” regulations mark an unprecedented federal intrusion into the realm of internet operation. They’re condemning the three Democratic commissioners who supported the measure for imposing a draconian solution to a non-existent problem. In the aftermath of Tuesday’s 3-2 FCC vote, Republican members of the House and Senate are preparing to file bills to thwart the new FCC rules, and conservative activists are gearing up for a major fight.

“On January 5, I will re-file a bill to prohibit the FCC from implementing these rules and regulations,” said Rep. Marsha Blackburn (R-Tenn). “We, as members of Congress should control [the process of internet regulation] if we decide it’s necessary. There is strong bipartisan agreement on that point.” Blackburn said she expects a Senate companion bill, authored by Sen. John McCain (R-Ariz.), to address the issue in the upper chamber. “I look at this as the Fairness Doctrine of the internet,” she warned, “the FCC would be in a position to make determinations of online priorities and value. We will vigorously oppose [today’s FCC vote] because it’s a hysterical reaction to a hypothetical problem.”

Blackburn said swiftly cutting the FCC’s recent maneuver off at the knees would send an important message to the agency that internet regulation is beyond its jurisdiction. “They’ve done this during the week of Christmas, when they think people aren’t watching. We are watching, and we don’t want to give them even a toehold on internet regulation because once they have one, they’ll look to expand it,” she said. Blackburn pointed to internet taxation and content micromanagement as potential future FCC abuses if Tuesday’s move is permitted to stand.

Phil Kerpen, Vice President for Policy at Americans for Prosperity, said conservatives must combat the new regulations both on substantive and procedural grounds. “Conservatives should care about this because the internet has been unregulated for ten years, and has been wildly successful during that time. Now, Democrats are looking to regulate it for the first time ever. On its face, it’s a huge increase in the reach and strength of the federal government’s regulatory power,” he said.

“From a process standpoint, the FCC’s action represents an agency ignoring the clear intent of Congress, the people’s elected branch, as well as a recent court ruling,” Kerpen said. More than 300 members of Congress from both parties contacted the FCC in the spring, demanding they defer to Capitol Hill on rules governing the internet, and the DC Circuit Court of Appeals dealt the FCC’s online regulatory ambitions a severe rebuke in April. The American people had their say on the matter, too: All 95 Congressional candidates who ran on an explicitly pro-net neutrality platform in 2010 lost.

Despite clear opposition from two branches of the federal government and the American people, the FCC has forged ahead with its aggressive regulations. Beyond the introduction of legislation authored by Blackburn and McCain, some conservatives are suggesting additional responses to Tuesday’s action. “The best, cleanest response is for Congress to use a process called the Congressional Review Act (CRA), which can overturn any federal agency rulemaking,” Kerpen said. “It’s important to use this mechanism because it’s protected against the filibuster.”

Such a move would likely fly through the Republican-controlled House next year, but might stall in the Senate. Even there, Kerpen argued, the CRA offers a viable solution: “It only requires 30 Senators to sign a petition to introduce it. Once it’s introduced, the petition forces ten hours of debate, followed by an up-or-down vote that cannot be filibustered,” Kerpen explained. Thirty Republicans Senators have already signed a letter to this effect, as has pro-net neutrality Sen. Olympia Snowe (R-ME), who objects to FCC interference. “It’s important to force this vote, whether it succeeds or not. We must demand that Senators make difficult, on the record decisions about these issues,” Kerpen said. Sen. Kay Bailey Hutchison (R-Tex) delivered a floor speech late Tuesday, alerting Democrats that Senate Republicans already have 30 members ready to sign such a petition, and vowing to compel a floor vote next session.

The subtext to this brewing fight is the question of how far Congress will allow the executive branch to implement its agenda through increased regulation and rulemaking, bypassing the legislative process. This approach was advocated in a 54-page report published by the liberal Center for American Progress in November. “Pushing back against the FCC will set the tone for the next two years about how aggressive the Obama administration can be in pursing regulatory regimes. This fight is the first opportunity for Congress to show whether it has the will to stand up to these executive branch power grabs,” Kerpen said.

Blackburn agreed, calling the effort to block the new FCC regulations “one of the opening battles with the administration over regulation.” She said Congressional Republicans won’t be complacent. “We’re not going to sit by and just let them do this,” she promised. Blackburn also cited the House GOP’s “Pledge to America,” introduced during the fall campaign, which called for Congressional approval “of any new federal regulation that has an annual cost to our economy of $100 million or more.”

Both Blackburn and Kerpen also mentioned the appropriations process as a safety net solution to impeding a regulatory onslaught, if legislative fixes fall short. “If the Congressional Review Act fails, we can look to appropriations to starve any funding for enforcement,” Kerpen said.