Lessons from the Georgia Runoff 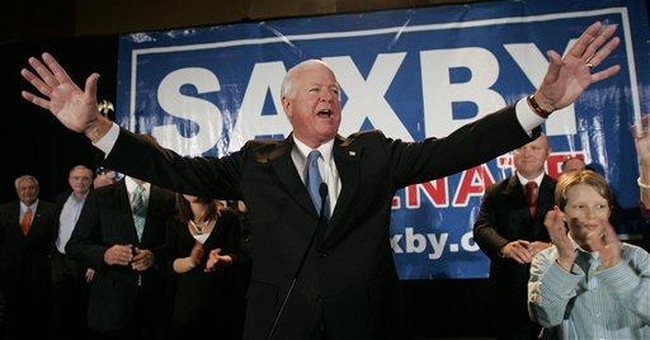 Last week's comfortable re-election victory for Sen. Saxby Chambliss comes as an early Christmas gift to Republicans still smarting from the comprehensive drubbing they suffered in November. It also ends the Democrats' dream of exacting "revenge" on the man who defeated their beloved Max Cleland in 2002 by allegedly questioning his patriotism, or so the legend goes. The GOP win in Georgia should not be over-hyped, but it may provide a few insights about the national political landscape—as well as a small dose of good news for the Right.

First, Chambliss' 14-point margin of victory ended up being substantially higher than polls predicted. On November 4, Chambliss barely missed the 50 percent threshold that would have staved of a run-off, edging challenger Jim Martin by a paltry three points. Public opinion surveys leading up to the subsequent election indicated Chambliss had a sizeable lead, although only in the mid-to-high single digits. When the runoff votes came in on December 2, the incumbent surged to a solid 57 percent, and any lingering Republican anxiety over holding the seat gave way to sighs of relief. The blowout win puts to rest most fears of an unstoppable blue tide destined to overwhelm even the reddest of states. As Michael Barone's characteristically excellent turnout analysis indicates, the GOP did a commendable job of mobilizing its supporters for the must-win runoff.

Second, the win locked up a crucial 41st Senate seat for the minority party, thus securing the means to launch filibusters designed to block the most noxious leftist proposals being debated in the Democrat-controlled Congress. Unless the unserious Democrat candidate in Minnesota manages to litigate his way into office, Mitch McConnell will have 42 votes in his caucus with which to work. Granted, there's no guarantee that Senate Republicans will be able to forge the requisite united front to actually mount successful filibusters, depending on the issue at hand. The key is that a plausible filibuster threat now exists, which would not be the case in a 60-40 chamber.

Third, this race was an early test of Obama's post-election coattails potential, and provided an interesting glimpse at the national players who were both present and notably absent on the campaign trail. On the Democrat side, President-elect Obama mostly stayed away from the contest, save for recording a radio ad and some robocalls on Martin's behalf. He did, however, deploy some of his sharpest campaign operatives and organizers to Georgia to coordinate the runoff effort, yet even these elements of Team Obama couldn't precent the gap between the two candidates from widening 11 points in a matter of weeks. Without Obama himself on the ballot, the generic Democrat brand faltered.

As for the Republicans, Sarah Palin lent her star power to the Chambliss campaign, stumping repeatedly for his re-election bid. Shortly after retaining his seat, Chambliss told Fox News, "I can't overstate the impact [Palin] had down here…when she walks in a room, folks just explode." The question of Palin's future within the Republican party evokes passionate disagreements, even among self-identified conservatives, but her performance in Georgia must not be overlooked. Whether she can appeal to—and win over—the national electorate in the future is an open question, but there can be no question that she is an invaluable campaign weapon for drawing out the GOP base. Any turnout model that gives the GOP even a chance of victory requires high and enthusiastic turnout from traditional conservatives. Now that it's clear she's a willing team player, the RNC would be insane not to deploy Palin all over the country to campaign with, and raise funds for, its candidates—especially in red states.

Incidentally, it's a testament to Sarah Palin that she has been such a happy warrior for her party in light of how she was treated by some people on her own side. She may or may not be the party's best choice for national office in the future, but she certainly is an ebullient, gracious, conservative female leader who deserves better than the treatment she's received in recent months.

Despite this good news, it would be dangerous to view the Chambliss triumph as a sign that everything is peachy in Elephantland. The mere fact that Republicans have been reduced to crowing about a Senate win in ruby-red Georgia shows how dire this election cycle has been. Yes, the 14 point blowout proves that the Republicans aren't on life support everywhere, but avoiding life support in a traditionally strong region isn't exactly a condition to celebrate.

Also, just because Democrats floundered without Obama at the top of the ticket in a brutal year for their opposing party doesn't mean that Obama is necessarily a flash-in-the-pan phenomenon that will flame out quickly. Many Democrats operated on the assumption that Ronald Reagan was an effective communicator whose policies and ideas would die as soon as he left office. As Democrats chuckled at the "lightweight" former actor, Reagan advanced his worldview and pulled the electorate to the right.

Finally, the Georgia win does not in any way refute claims by some leading conservatives that the Republican Party could be walking a perilous line of becoming a regional party. Under some prognostications—as gloomy as they may be—Georgia should be the heart of a marginalized southern party with limited appeal to northeastern, western, and rust-belt voters. Additionally, Jim Martin was a poor candidate whose liberal record on taxes, guns, and abortion bordered on disqualifying any Georgia politician seeking statewide office.

It's going to be a tough road back for the GOP, and holding Chambliss' Senate seat is an encouraging start. Now the hard work begins.