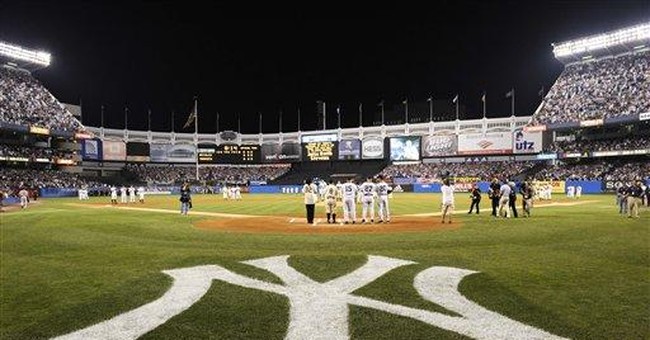 As I sat glassy-eyed in front of my television last Sunday night, my heart began a slow and painful journey to the back of my throat. I sat alone; relieved that nobody else was present to witness my moment. The previous week was dominated by unsettling headlines from Wall Street and a number of unwelcome developments on the campaign trail, yet I had managed to keep my emotions in check without a problem. My self-enforced toughness melted on Sunday night. Yankee Stadium—an icon of my childhood and a bastion of countless memories—was closing its doors for the final time. The arrival of that long-expected reality moved me in a way I had not fully anticipated.

I was born abroad and spent much of my early childhood overseas. Outside of my membership in the Boy Scouts of America ("Be prepared!"), I had very few substantive ties to the nation that I nonetheless called home. Some things were never in doubt, though. My parents both grew up in greater New York, so it was made clear to be from an early age that the Bensons were Yankee fans. I was familiar with the famous interlocking N-Y logo well before I had any idea what a sacrifice bunt was. So when we moved back stateside, one of my urgent priorities was to attend a Yankees home game to see what the big deal was. My father, anxious to baptize his nine-year-old into official Yankee fandom, bought four tickets along the first base line for an early season afternoon game at The Stadium in 1994. I don't remember very much about the game itself, except for the fact that the Yankees fell to Baltimore and manager Buck Showalter was ejected for a rare animated argument with an umpire. What I remember clearly is how overwhelmed I was by the enormity of the venue, and by the energy of the fans. I was hooked.

Over the next 15 years, I took in dozens of contests at the great ballpark in the Bronx. I grew up with that place. I remember the agony when the Yanks blew a 2-0 series lead to Seattle in the 1995 playoffs. I fondly recall the tears of joy and sparkling cider that marked my family's basement celebration when the Yankees won the World Series the very next season. I remember the exhilarating tension that gripped the city during the Subway World Series of 2000, and I still can't quite stamp out the smoldering remnants of Boston's surreal ALCS comeback in 2004. I only experienced a tiny fraction of the 85-year history of Baseball's Cathedral, but I still perceive it as an inextricable part of my identity as a sports fan.

Above all the game exploits and immortal flashes of baseball heroism that took place there, the Yankee Stadium moment that stands out above all others for me took place prior to a game on an October night in 2001. On that evening, two of my deepest passions—baseball and politics—intersected in a sobering and unforgettable event. The nation was still reeling from the heinous attacks that had devastated a neighboring city borough a few weeks earlier. Determined to show the world that New York was stronger than ever, fans packed the bunting-festooned stands to witness game 3 of the World Series.

The President of the United States, an avid baseball fan, threw out the first pitch. His Yankees bullpen jacket concealed a bulletproof vest as he strutted onto the field. Fifty-five thousand New Yorkers—Democrats, Republicans, and Independents—stood and cheered. Under the advisement of shortstop Derek Jeter, President Bush chose to deliver his ceremonial, and extraordinarily symbolic, first pitch from the mound itself; a cheap toss wouldn't do. The leader of the free world wound, kicked, and dealt: A strike. Recounting that simple and powerful act induces goosebumps every time.

Almost seven years later, with the current MLB season underway, I was unsure if I'd manage to make the pilgrimage back to New York to attend one last game. The 2008 campaign was shaping up to be pretty disappointing anyway, I told myself. I still knew I had to make it back. Appropriately, my final visit to the House That Ruth Built was with my dad. He'd been enjoying Yankees baseball on that plot of land since Mickey Mantle patrolled centerfield. We drove to the ballpark and climbed up to our nosebleed seats on a humid July night. The game got ugly fast; our Yanks were pummeled early and often by the hated Red Sox, but the game outcome wasn't really the point. During the middle innings, we sat and talked about our favorite memories of the place, pointing to the best seats we'd ever sat in, and relishing our many "I was sitting right there when…" memories.

As we left the ballpark, we meandered over to the new Yankee Stadium, still under construction. It will be spectacular, we both agreed, but nothing can replace the original. As we slowly walked back to the car, a telltale lump started to form in my throat before I convinced myself to calm down. There were almost three months of home games left on the schedule. Plenty of time.

Suddenly, last Sunday night, the moment arrived. The swan song crept up on me. The closing ceremonies were executed beautifully, and the game was all I could have asked for: A Yankees win finished off by legendary closer Mariano Rivera. After the final out, the team acknowledged the fans and took a final lap around the playing surface to the strains of Sinatra's trademark Gotham anthem. And that was it. The place where I was introduced to the wonder of baseball, where my team clinched two of its four world championships in my lifetime, where my high school friends and I rebelliously spent senior ditch day, and where a special baseball bond between my father, my brother, and me was born and cultivated—that place was gone. Is gone. And for a fleeting moment on a couch hundreds of miles from the Bronx, NY, nothing—not the latest polls, not the stock market roller coaster—nothing else seemed to matter.