SAFE Banking Act a Positive Step for Federalism, Safety, and the Economy

Grover Norquist
|
Posted: Sep 24, 2019 12:58 PM
Share   Tweet
The opinions expressed by columnists are their own and do not necessarily represent the views of Townhall.com. 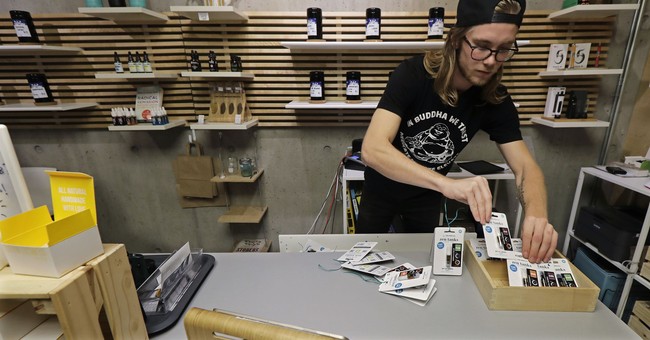 Federalism, a founding principle of our nation, is still a good idea. It allows the states to be laboratories of democracy and to compete for citizens, investment and job-creating businesses. Different state policies help the nation see what works and what does not work.

In the area of cannabis regulation, public preferences are trending toward some kind of decriminalization or legal status in many states. But not in all states.

Congress shouldn’t have federal laws gutting the ability of states to experiment. The best way to have a conversation about how cannabis should be treated is to have the 50 states experiment and learn from the results.

Unfortunately, the federal government does interfere with state experimentation on cannabis policy through heavy banking and tax regulations.

There are now enough states with legalized cannabis -- 22 states have legalized medical use and 11 states plus the District of Columbia have legalized non-medical use -- that banking for these businesses should not be a stumbling block maintained by Congress.

Today, most banks will not allow state-legal cannabis businesses to deposit money into bank accounts because of federal prohibition. This makes it extremely difficult for these companies to pay electric bills, leases, and other expenses. It also forces them to hold large sums of cash, leaving them more vulnerable to robberies.

With a total of 33 states and the District on the books with some level of legalized cannabis and more expected to come on board through ballot initiatives, including Florida, Arizona, Missouri, New Jersey, New York and Ohio, this discrimination against the cannabis industry needs to go. People need to be able to bank in local banks and not have a cash-only business, but a business where you can use credit cards and checks – for safety and security reasons. These are legitimate businesses. They are not money launderers or drug smugglers.

But if Congress doesn’t solve the banking problem now, these businesses could be a target for illicit activity. Cash-only businesses are notorious for being used to launder money or for being robbed.

Conflicts between federal and state law not only create an inability to safely store capital, but also produce burdensome regulations and extortionary tax rates that put the cannabis industry at a serious disadvantage compared to other sectors of the economy.

In spite of unfavorable federal headwinds, the cannabis industry is growing. In 2018, legal cannabis sales were $10.8 billion nationwide, a 34% increase from the previous year. The legal cannabis industry now supports more than 211,000 full-time jobs. This growth isn’t included in Bureau of Labor Statistics numbers on job and economic growth because the industry isn’t legally recognized at the federal level. But that doesn’t mean the growth isn’t there and that it won’t continue.

There is good news. Congress is preparing to take action on the SAFE Banking Act of 2019, a bipartisan bill that would allow cannabis companies to bank safely, by providing federal protections for banks that work with state-legal cannabis companies. First introduced by Ed Perlmutter (D-Colo.), the bill now has 206 cosponsors in the House of Representatives and 33 cosponsors in the Senate, sponsored by Sen. Cory Gardner (R-Colo.) and Sen. Jeff Merkley (D-Ore.). This bill would solve the safety and security problems resulting from companies’ inability to safely store capital.

There are still issues for Congress to address when it comes to cannabis. Specifically, section 280E of the tax code prevents businesses connected to “illegal” drug sales from using ordinary and necessary deductions. This means that state-legal cannabis businesses across the nation are unfairly discriminated against and even face income tax rates as high as 90 percent.

In addition to providing well-paying jobs, a secured American cannabis industry will erode the market share currently held by the Mexican cartels.

Meanwhile, if a state says no cannabis legalization, then a state says no. But when they do say yes, then it should be respected. Congress doesn’t have to decide that cannabis prohibition was completely wrong at all times and in all places to recognize there’s no reason to have these additional impediments on a legal business in a state.

Passage of the SAFE Banking Act isn’t the end of the line. Cannabis companies will continue to face scrutiny, federal interference, and an imbalanced regulatory climate. However, the bill is a positive step for federalism, safety, and the economy.