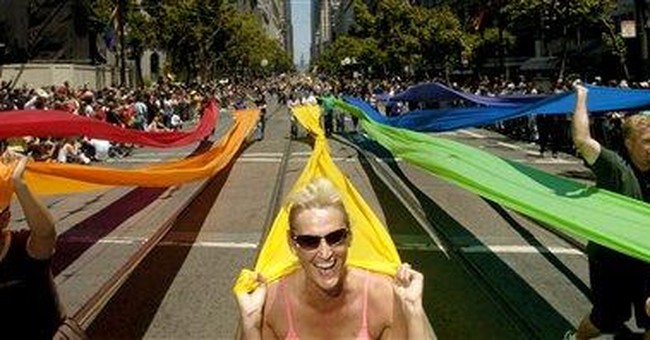 About a month ago, the California Supreme Court, in a 4-3 decision, issued a declaratory opinion that Proposition 22, which states that, “Only a marriage between a man and a woman is valid and recognized in California,” enshrined into statutory law by 61.4% of California voters in 2000 (over four million voters), was “unconstitutional” on the basis that "gender discrimination" violates the equal protection clause of the state constitution.

The LA Times reported that:

"The California Supreme Court struck down the state's ban on same-sex marriage Thursday in a broadly worded decision that would invalidate virtually any law that discriminates on the basis of sexual orientation."

Sadly, many of the leading "conservative" and "Christian" pro-family organizations such as AFA, Liberty Council, ADF, FRC, ACLJ, and Focus on the Family have been in full surrender mode conceding this same liberal talking point that the court "legalized same-sex marriage in California" and that the only way to ensure preserving traditional male-female marriage is through a state constitutional amendment scheduled to be on the ballot in November.

The court said the plaintiffs were entitled to the issuance of a "writ of mandate" but issued no actual writ to state officials to perform the ministerial act of issuing marriage licenses to same-sex couples. Even if they had issued a "mandate," state officials are sworn to execute the law and not effectuate a court's opinion. Moreover, any court mandate or "order" would have been both unenforceable and invalid, since, according to a recent California Court of Appeals ruling from April of 2008, Sondermann Ring Partners v. Buenaventura, the court can declare an action of the legislature unconstitutional where such action exceeds the limits of the Constitution, but the courts have no means and no power to avoid non-action. In other words, the court is not constitutionally permitted to enforce its opinion.

Governor Schwarzenegger has fulfilled his promise to "uphold the court ruling" by authorizing changes to the marriage certificates, replacing "husband" and "wife" with "partner A" and "partner B” which is ironic considering that he vetoed a previous attempt by the legislature in 2005 to eliminate gender requirements for marriage which he argued required the assent of the electorate. He has also authorized Justices of the Peace and Town Clerks to solemnize and perform same sex marriage ceremonies which began on June 15th.

But the main question is whether or not Governor Schwarzenegger possesses the constitutional authority to do so.

The governor, according to Article 5 Section 1 of the California Constitution is solely responsible for seeing that "the law is faithfully executed."

And since all law making powers solely reside with the sovereign people of the state of California and their elected representatives, the governor is bound to only enforce the laws and statutes which have been enshrined into law via the people (in the case of a initiative statute or constitutional amendment) or their elected representatives, including Prop 22, which has not changed.

According to the California Constitution, only the voters possess the enumerated authority to amend or repeal the marriage statute limiting marriage to one man and one woman (Prop 22). As Judge Baxter wrote in his dissent:

Under article II, section 10, subdivision (c), that body cannot unilaterally repeal an initiative statute, such as Family Code section 308.5, unless the initiative measure itself so provides. Section 308.5 contains no such provision.

Nemo dat quod non habet, (You cannot give what you do not have.”) In other words, the California Supreme Court cannot give to the Legislature, what neither it, nor the legislature, has: the power to overturn the people’s initiative legislation. No branch of government, even the branch that claims to be the final arbiter of a Constitution can gain legal authority which it does not possess. To claim then the "the court legalized same sex marriage" by "striking down" the people’s initiative statute limiting marriage to one man and one woman has absolutely no constitutional basis.

Governor Schwarzenegger has violated his sworn oath to uphold the California Constitution to only enforce the current laws and statutes of the state of California by illegally authorizing changes to, and issuance of, marriage certificates to same sex couples.

Like former Massachusetts Governor Romney before him, Governor Schwarzenegger has falsely asserted that the court's opinion, containing no valid or enforceable court order, "legalized same sex marriage" and that it is his obligation to enforce the "court's decision." Romney illegally authorized the Department of Public Health to change the marriage certificates from "husband" and "wife" to "partner A" and "partner B" and ordered Town Clerks and Justices of the Peace to perform and solemnize same sex "marriages," or tender their resignation (which one did), without an accompanying statute approved by the legislature.

Schwarzenegger’s tyrannical actions are straight out of the Romney playbook.

It is no surprise that the vast majority of the leading conservative “pro-family” organizations, lawyers, and radio-pundits have been silent about Schwarzenegger’s illegal actions since virtually every one of them from Focus on the Family to Ann Coulter to Rush Limbaugh totally suppressed the truth about Mitt Romney’s virtually identical illegal actions.

Romney, not the Supreme Judicial Court of Massachusetts, was originally solely responsible for the illegal issuance of marriage licenses to same sex couples in 2004. The claim that the "activist" Goodridge Court "legalized gay marriage" is a total lie. The court didn't even pretend its declaratory opinion on the one individual case before it, could in any way influence the current marriage statute:

"Here, no one argues that striking down the marriage laws is an appropriate form of relief."

In fact, the court admitted that under the marriage statute, Chapter 207 of the Massachusetts General Laws, homosexual marriage is illegal:

"We conclude, as did the judge, that M.G.L. c. 207 may not be construed to permit same-sex couples to marry."

In California, while the court has claimed that the designation of marriage as a “union between one man and one woman” must be stricken from the statute, it is crucial to reiterate that only the sovereign people of California have the constitutional authority to amend or revoke an initiative statute such as Prop 22.

Since courts lack the authority to enforce their own opinions and cannot make law, they can only be considered “activist” when the executive branch enforces their opinion as if it were the “new law.” While a bare majority of four members of the court, no doubt issued an illegal opinion and should be impeached for doing so, Governor Schwarzenegger alone authorized the issuance of the illegally altered marriage certificates. Executive tyranny, not “judicial activism,” is what occurred in California (and Massachusetts).

The bottom line is this: Same-sex “marriage” is not legal anywhere in the United States of America from Massachusetts to California. Now if only somebody would explain this basic legal concept to our superstar “conservative” leaders, lawyers, and radio-pundits who incessantly swear that it is.