Why are Rush, Sean, Laura, and Ann Crying About McCain? 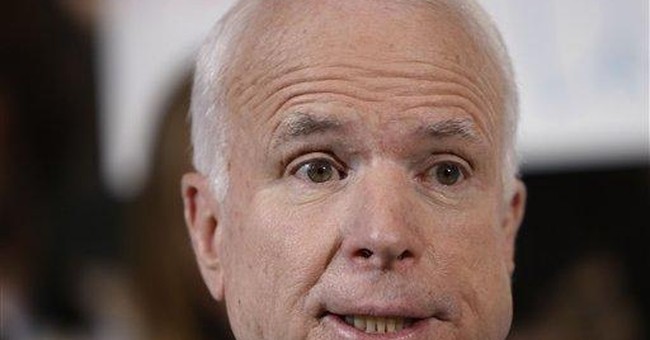 Rush Limbaugh, Sean Hannity, Laura Ingraham, and Ann Coulter and many others in the conservative media have been attacking Senator McCain relentlessly, assailing him as a liberal and referring to him as "Juan McCain." Limbaugh has claimed that a McCain (or Huckabee) nomination would "destroy the Republican Party."

Frankly, it is unfathomable to me and many others how any honest and responsible person could fail to say exactly that about Willard Mitt Romney -- if they've done the homework assignment  Now that Romney has "suspended" his campaign and McCain looks like the inevitable nominee, many of the conservative elites continue to cavil and lambaste McCain. Ann Coulter stated on "Hannity & Colmes" that she would go work for Hillary before voting for McCain. Hmmm.

Not to be outdone, talk radio host Laura Ingraham stated "there is no way in hell" she could "pull the lever for John McCain."

I for one am getting a little sick and tired of listening to the relentless screeds and caterwauling of these conservative elites who are in many regards totally disconnected from the conservative base -- especially the evangelical Christian field slaves who bring in the harvest. Why are the spoiled elites complaining about McCain like a bunch of petulant children when the reality is that, collectively, they share considerable blame for the fact that McCain is our likely nominee?

You see for months these conservative elites have been whitewashing by far the most left wing GOP presidential candidate in American history, Mitt Romney.

Let's review what the conservative pundit "Dream Team" ruthlessly covered up about their boy Mitt while inadvertently putting us on a one-stop railroad to McCain City. As I have written in numerous exposes here on Townhall.com, as governor, Willard Mitt Romney:

- Signed into law a mandatory health insurance plan that established taxpayer-funded abortion at fifty dollars each as a healthcare "benefit" (after his supposed "pro-life conversion.) -- a healthcare plan enthusiastically endorsed by Ted Kennedy, Hillary Clinton, and Planned Parenthood -- that the Wall St. Journal has recently reported is already in "intensive care."

- Forced Catholic Charities, the state's largest and oldest adoption and foster care agency to place children with homosexual couples (or abandon all adoption and foster child work to non-Christian politically correct left-wing agencies -- which they eventually were forced to do). Romney lied to pretend he was under a legal obligation to do this, but even former Massachusetts Governor Mike Dukakis pointed out that with a stroke of his pen Romney could have canceled the administrative regulation that he was pretending was a "law."

- Forced Catholic Hospitals to issue abortifacients ("morning after" abortion pills) even though they were not legally required to do so. Again, Romney lied about state law to cover his motive and was against caught doing so by liberal former governor Dukakis! (How does a supposedly "pro-life," "conservative" Republican keep getting caught sneaking to the left of Michael Dukakis?)

- Raised taxes and government fees by over $700 million which decimated the Massachusetts economy.

- Shifted state taxes to municipalities to appear to balance the budget (his "economic miracle") causing local property taxes to skyrocket and devastate many families.

In establishing taxpayer-funded abortion on demand as a "healthcare benefit" and unconstitutionally ordering officials to perform "same-sex marriages," Mitt Romney was able to achieve what neither Hillary nor Barak nor any other Democrat has ever been able to.

Yet Ann Coulter, who was quick to accuse GOP primary voters in Iowa and New Hampshire who refused to vote for her cutie-pie Romney of "not doing their homework," ignored Romney's entire far left wing record and declared Romney to be "manifestly our best candidate?" What was that about "homework", Ann?

So what does all this have to do with McCain, you ask?

Had these talkers, pundits, and conservative "leaders" told the truth about Romney's $50 subsidized abortions, failing government run healthcare plan, $700 million in tax increases, increased funding for homosexual indoctrination starting in kindergarten, illegal institution of same sex marriage by misrepresenting the Goodridge court opinion and lying about the Massachusetts Constitution, support for homosexual Scout Masters etc… voters interested in supporting a true conservative would have likely gravitated toward Governor Huckabee far sooner and in huge numbers. But that couldn't be allowed to happen. The social conservative voters are the field slaves in this party, not the decision-makers.

Romney's limousine-chasing lawyers and rent-a-pundits savaged Huckabee with gross misrepresentations of his record and sabotaged conservatives' chance to deny John McCain the nomination. Instead of having the author of McCain-Feingold, McCain-Kennedy, and McCain-Lieberman as our nominee, we could have had the most authentic across-the-board conservative candidate currently in the race (Huckabee) -- the only candidate who supports a Human Life Amendment and a Federal Marriage Amendment, who is credibly and unapologetically pro-second Amendment, in favor of securing our border and building the fence (he has been endorsed by Duncan Hunter), and who has proposed the most aggressive fiscal tax policy of any candidate -- the Fair Tax, which would abolish the IRS and federal income tax.

These are not what honest people smear as "Jimmy Carter positions." Yet that's who the radio talkers and pundits keep telling us Huckabee is.  The truth was that their boy Mitt Romney is the GOP's closest counterpart to the Democrats' soulless Rorschach test, Barak Obama, a truly dangerous demagogue.

So, please, enough with the McCain-bashing, Rush, Sean, Laura, and Ann. We could have had an authentic conservative Mike Huckabee as our nominee. Had you and your fellow travelers not waterboarded conservative voters for about a year with falsehoods, Huckabee would have united the base (you know those 40 million conservative Christians who put Republicans in the White House election after election). Do you think thinking conservatives are any more happy than you are with McCain as the Republican nominee? Not on your life. But the difference between you and us is, this is your fault.

NYT: Roe v. Wade Got Shredded Because Dems Dropped the Ball in These Key Races
Matt Vespa
4 Lies About the Dobbs Ruling, Debunked