Why I'm Voting for Mike Huckabee 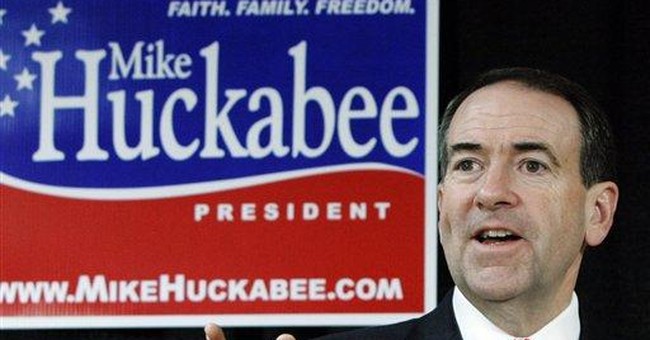 I'm putting principle above what they're calling "party loyalty" these days. I'm putting inalienable rights endowed by our Creator above my friendships with other conservatives in the media. I'm putting real constitutions above the celebrity "conservative" lawyers who long ago figured out that defending the actual meaning of constitutions is no way to get ahead in the world.

If I disappear you can send letters to the gulag where they send real conservatives and constitutionalists who point to conservative emperors who have no clothes.  Here goes.

I have made the decision to vote for Governor Mike Huckabee on the basis of research into actual records -- rather than empty campaign double-talk.  Alone among the frontrunners, his record is conservative on the most fundamental issues. I will go even further: examining records proves that when $100 million dollars of GOP campaign propaganda is set aside, Mike Huckabee is the only real across-the-board (social and fiscal) conservative among the three front runners.

Mitt Romney is not only not a conservative on any issue, he's not even on the left-right spectrum. He has no beliefs. No principles. No backbone. No soul. He is a soulless creature who will do and say anything to get elected.

McCain is somewhere in the middle. He has disappointed me, and many other conservatives, many times (McCain-Feingold and McCain-Kennedy chief among them). If he becomes the GOP nominee I will support him.

I will not under any circumstances vote for Mitt Romney. Ever.

Here is why I support Mike Huckabee:

Abortion: First and foremost, I am voting for Huckabee because he is the only leading candidate who supports the core of the GOP plank - the Human Life Amendment. Mitt Romney openly opposes it. McCain has voted "pro-life" but voting is as far as he will go. He recoils from paying any price politically or personally to end the holocaust happening daily around the corner from your house. When pro-life conservatives were trying to replace career pro-abort Sandra Day O'Connor on the Supreme Court, McCain called Justice Samuel Alito "too conservative."

We will never be safe and secure from either foreign or domestic enemies until we stop the barbaric, inhumane practice of abortion which has liquidated almost 50 million babies since Roe v Wade. I agree with those who examine providential events in American history and conclude that God has protected this nation at crucial times. If you are even open to that possibility, wouldn't you have to agree that 50 million seems like a lot of babies to kill and still hope God will protect America? Isn't that hypocritical of us? Outlawing abortion at the federal level is not a secondary issue.  It's Issue Numero Uno. It's a no-brainer. Mike Huckabee deserves every vote in America for understanding that alone.

Senator McCain is not in favor of amending our constitution to ensure that, regardless of what state a baby is born into, he or she is guaranteed the legal right to life. How puzzling to claim to believe in the inalienable right to life and liberty yet assert that "federalism" or "states' rights" somehow grant states a power to take innocent life. In 1860 that position was not the abolitionist position. It was the pro-slavery position. Today it is neither constitutional nor conservative. It's just theoretically halfway between good and evil. And it won't end the harvest of death and take the blood off our hands.

Mitt Romney is the Founding Father of government-subsidized, $50 abortion-on-demand in Massachusetts. Laws don't get any more pro-abortion than Mitt Romney's Orwellian health care plan...unless you go to Communist China. Even the Communist Democrats in Boston couldn't pull that off. He is not merely "weak" or unconvincing on this issue. He's an amoral pro-abort masquerading as a convert to the view that human life is sacred. Other than that he's indistinguishable from Ted Kennedy and Hillary Clinton (both of whom have gleefully endorsed the Romney-Kennedy-Planned Parenthood healthcare plan). Enough said? He claims he was required by law to sign this healthcare bill that established abortion with a $50 co-pay as a "healthcare benefit."  That is an insult to our intelligence and a pre-meditated lie. There is no Massachusetts' law that requires subsidized abortion on demand. Romney also appointed a Planned Parenthood member to his healthcare advisory board and no pro-life member. Pro-life governors don't do that. This alone puts him on the pro-abortion extreme of the spectrum -- for Democrats, let alone Republicans.

Marriage: Unlike McCain who worked hard to defeat a Federal Marriage Amendment (FMA), Huckabee strongly supports a FMA and understands what is at stake for America, our children and grandchildren if we fail to enshrine into law that marriage is between one man and one woman. Although Governor Romney has recently staked out a position claiming to support traditional marriage, he speaks as the opportunistic politician who unilaterally imposed "same sex marriage" in Massachusetts after the law-making body that has exclusive authority to do so, refused to grant the Goodridge judges their fantasy. He did this revolutionary act -- unbidden by even the judges -- claiming he was just "following the law." A lie, pure and simple, powerfully refuted by the state Constitution itself.

As many constitutional experts have tried in vain to warn the conservative elites, there is no law that allows "same sex marriage" in Massachusetts. It's still illegal. The court merely issued a surreal and legally impotent declaratory opinion that barring same sex marriage was unconstitutional. Romney even opposed efforts to remove the judges who violated their oaths of office by ignoring the state constitution's removal of court jurisdiction to even hear such a case. In September of 2007 we finally learned the explanation for Romney's mysterious actions: he was carrying out a 2002 campaign promise to the homosexual "Log Cabin" Republicans.

Immigration: Although Governor Huckabee has been called the "amnesty" candidate, he has never supported "amnesty." He is in favor of securing the border and has taken the "No Amnesty Pledge." He has received the endorsements from Congressman Duncan Hunter and Jim Gilchrist founder of the Minuteman Project. Senator McCain was the co-author of the McCain-Kennedy-Bush "comprehensive immigration" bill that was ultimately defeated. But he now supports securing the border first. Governor Romney supported McCain-Kennedy-Bush as well and now, like McCain, claims to support securing the border first. Neither has that much credibility with me when it comes to this issue. Although I tend to trust McCain more given "Multiple Choice Mitt's" penchant for surreal flip flops.

Foreign Policy/National Security: Governor Huckabee has the most executive experience of any candidate in either party - three or four times what Mitt Romney has, considering Romney spent so much time outside his state (212 days in his last year in office).

With nearly eleven years running a state, Governor Huckabee is by far the best qualified to manage a huge, bloated bureaucracy. He supports increasing defense expenditures from our current 3.9% of GDP level to the Reagan Era 6% of GDP level and the "Powell Doctrine" of using overwhelming force. Senator McCain lacks the executive experience but does have the actual military and government experience and is no doubt well qualified to lead the War on Islamic Jihadism. By supporting the surge even when it was not politically popular, McCain showed that he is willing to do the right thing regardless of the polls. Governor Romney is the least qualified of the three. Romney's chief counterterrorism expert Cofer Black was condemned by the 9-11 Commission, Congressional Joint Inquiry, and the CIA Inspector General for his mismanagement of the CIA's Counterterrorism Center as contributing factors in the 9-11 attacks. This should be a major concern for voters.

2nd Amendment: Huckabee has always been a staunch supporter of the 2nd Amendment.  McCain has more of a mixed record on gun control laws. Romney is by far the most pro-gun control anti-2nd Amendment candidate. He has always supported the Brady Bill and the so called "Assault Weapons Ban" both of which are opposed by the NRA. As governor he boasted about having signed into law some of the strictest gun control laws in the country.

Taxes and Spending: Huckabee is, by far, the most fiscally conservative of the three. As governor he cut taxes almost 100 times and left Arkansas with an $850 million surplus. While I have some questions about his proposed" Fair Tax" which is a flat consumption based tax that would replace our federal income tax, it is by far the most aggressive fiscal proposal put forth by any candidate. While Senator McCain did oppose the Bush Tax Cuts (b/c they didn't include enough spending cuts), he now supports making them permanent. And nobody doubts his anti-pork spending bona fides. Romney, as governor, raised taxes by over $500 million dollars. (He called them fees) leaving the Commonwealth in financial turmoil. His government run socialist healthcare plan he claimed as his signature achievement has been exposed as a catastrophe in the making. And although he derides McCain for not supporting the Bush Tax Cuts, Romney himself didn't support them either.

Special Rights for Homosexuals: Huckabee has always been opposed to same-sex "marriage" and any special rights based on sexual orientation. McCain has more of a mixed record as one of seven other GOP senators who opposed a federal marriage amendment. Romney boosted funding for pro-homosexuality indoctrination in schools, pushed gay adoption, falsely pretending that a law forced him to, and has been the more aggressive in catering to the homosexual militants than most liberal Democrats. He argued in 1994 that he could get more accomplished for the gay agenda than Ted Kennedy and made similar promises when running for governor in 2002. He called a 2002 Massachusetts protection of marriage amendment "too extreme" and is solely responsible for illegally instituting "same sex marriage" in the Cradle of Democracy. He also supports homosexual Boy Scout leaders and homosexuals serving openly in the military.