Gil Gutknecht
|
Posted: Aug 30, 2020 12:01 AM
Share   Tweet
The opinions expressed by columnists are their own and do not necessarily represent the views of Townhall.com. 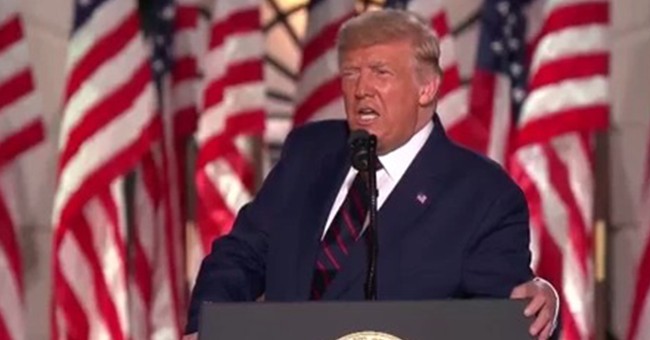 Poet Carl Sandberg had a special relationship with hard-working Americans, the people whose sweat and tears built this country. Ordinary people who met life head-on and accomplished some extraordinary things.

The two conventions were like paintings of the same country done in stark contrasts. The Democrat convention painted a dark picture of a nation whose glass was more than half empty. “If you think things can’t get worse…,” bellowed former First Lady Michelle Obama. The Republicans, in contrast, hoisted a glass that was again on its way to overflowing. One side was pessimistic and angry. The other, brimming with optimism and hope. The Republicans painted with bright colors. No pastels.

The GOP painting was like a photo mosaic. It was done by dozens of these ordinary Americans, each contributing a small section. But when you stepped back, you saw that shining city on a hill and a man with a confident smile leading us toward it. Early polling confirms that one convention fell flat. The people who choreographed the GOP convention should be celebrating.

The distinctive difference between the conventions was that the Democrats featured politicians giving classic partisan speeches. The Republicans showcased ordinary people simply telling their stories. And their stories were compelling indeed. These weren’t traditional Republicans. They certainly weren’t blue bloods. They were union leaders, civil rights activists, dairy farmers and working moms. Average people that Carl Sandberg wrote of in his immortal poem, "The People, Yes."

Who can forget Maximo Alvarez? The Cuban immigrant spoke with passion about his love for this country. From real-life experience, he described the dangers of communism. He told how his family had first fled Spain and then Cuba. Almost losing his composure, Alvarez warned that if we fall, there will be no place left to go.

And the Nun, Sister Dede Byrne spoke humbly on behalf of the marginalized. Standing with her weapon of choice, the rosary, she made clear why she supports President Trump: because he stands courageously with the most marginalized in our society, the unborn.

The Mayor and lifelong Democrat from Minnesota’s Iron Range (whose name would be hard to pronounce) was eloquent as he reminded working Americans how the Democrats and Joe Biden, in particular, had turned their backs on them.

Finally, young Nicholas Sandmann cut right to the quick. He spoke calmly and clearly when he told his story. The Leftist media tried to “cancel” him. They counted on him to cower and concede. They counted wrong. If you had a tear in your eye when he put on that red MAGA hat, you weren’t alone.

Ironically, both conventions were focused on one man, Donald Trump.

"This old anvil laughs at many broken hammers.

Some men cannot be bought."

Was Sandberg prophetically writing about President Trump? This president has taken blows from the angry Left who seek to unravel the very fabric of our nation. This man who refuses to play by the rules laid down by the virtue signaling, politically-correct thought police. The blows from the hopelessly corrupt media who have daily sought to destroy him. The vicious Democrats who tried to impeach him. The failed globalist establishment who now find themselves irrelevant in the new America-first order that Donald Trump created.

All their hammers lay broken.

The folks speaking at the Republican gathering understood and appreciated that Donald Trump has been taking these blows for them.

As if right on cue, Hillary loudly announced that under no circumstances should Joe Biden concede the election. Does anyone do bitter better? Then her friend Nancy proclaimed that Hide’n Biden should never agree to debate the sitting president. This was like manna from heaven! The GOP convention planners must have been ecstatic, they could never have scripted that.

Whatever momentum the Democrats thought they had is now gone. The people, those ordinary Americans now see the choice much more clearly. President Trump has in four short years created a new Republican Party made up of regular folks who work hard every day. He has an abiding faith in the people and they have a growing faith in him.