Why Batters Get Hit 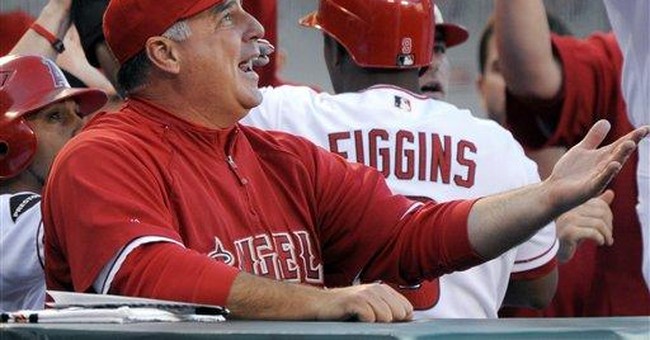 WASHINGTON -- The 2006 summit that preserved the peace occurred in a laundry room in the Minneapolis Metrodome after the Twins beat the Red Sox 8-1. Twins manager Ron Gardenhire, with center fielder Torii Hunter in tow, met with Red Sox manager Terry Francona to assure him that Hunter had not intentionally sinned.

With the Twins seven runs ahead in the bottom of the eighth, with two outs and no one on and a 3-0 count, Hunter had swung hard at a pitch. According to baseball's common law, he should not have swung at all.

This episode is recounted in Jason Turbow's "The Baseball Codes" about the game's unwritten rules. Just as the common law derives from ancient precedents -- judges' decisions -- rather than statutes, baseball's codes are the game's distilled mores. Their unchanged purpose is to show respect for opponents and the game.

In baseball, as in the remainder of life, the most important rules are unwritten. But not unenforced.

With the Red Sox down seven runs with three outs remaining, it was, according to the codes, time to "play soft." With the count 3-0, Hunter knew a fastball strike was coming from a struggling pitcher whose job was just to end the mismatch. Over 162 games, every team is going to get drubbed, so every team favors an ethic that tells when to stop stealing bases, when to not tag at third and try to score on a medium deep fly ball, when not to bunt a runner from first to second.

But, Turbow notes, the codes require judgments conditioned by contingencies. Although the team on top late in a lopsided game does not stop trying to hit, it stops pressing to manufacture runs. But how big a lead is "big enough"? Well, how bad is the leading team's bullpen? Does the losing team score runs in bunches? Where is the game being played? In launching pads such as Wrigley Field and Fenway Park? In the thin air of Denver's Coors Field?

The codes are frequently enforced from the pitcher's mound. When a fastball hits a batter's ribs, he is reminded to stop peeking to see where -- inside or outside -- the catcher is preparing to receive the pitch. In 1946, Dodger Hugh Casey threw at Cardinals shortstop Marty Marion while Marion was standing out of the batter's box -- but closer to it than Casey thought proper -- in order to time Casey's warm-up pitches.

Traditionally, baseball punishes preening. In a society increasingly tolerant of exhibitionism, it is splendid when a hitter is knocked down because in his last at bat he lingered at the plate to admire his home run. But it was, Turbow suggests, proper for the Cardinals' Albert Pujols, after hitting a home run, to flip his bat high in the air to show up Pirates pitcher Oliver Perez, who earlier in the game had waved his arms to celebrate getting Pujols out.

The consensus was that the codes were not violated when, during Joe DiMaggio's 56-game hitting streak in 1941, with one out in the bottom of the eighth and a Yankee runner on first and DiMaggio, who was hitless, on deck, Tommy Henrich bunted just to avoid a double play and assure DiMaggio another chance to extend the streak. Which he did.

In the codes, as in law generally, dogmatism can be dumb. The rule is that late in a no-hitter, the first hit must not be a bunt. So the Padres' Ben Davis was denounced for his eighth-inning bunt that broke up Curt Schilling's no-hitter. But the score was 2-0; the bunt brought to the plate the potential tying run.

Cheating by pitchers often operates under a "don't ask, don't tell" code. When George Steinbrenner demanded during a game that Yankees manager Lou Piniella protest that Don Sutton of the Angels was scuffing the ball, Piniella said, "The guy (Tommy John) who taught Don Sutton everything he knows about cheating is the guy pitching for us tonight." When a reporter asked Gaylord Perry's 5-year-old daughter if her father threw a spitball, she replied, "It's a hard slider."

When the Yankees' Deion ("Neon Deion") Sanders barely moved toward first after popping up to short, White Sox catcher Carlton Fisk, 42, a keeper of the codes, screamed: "Run the (expletive) ball out, you piece of (expletive) -- that's not the way we do things up here!" Were Fisk and his standards out of date? As has been said, standards are always out of date -- that is why we call them standards.