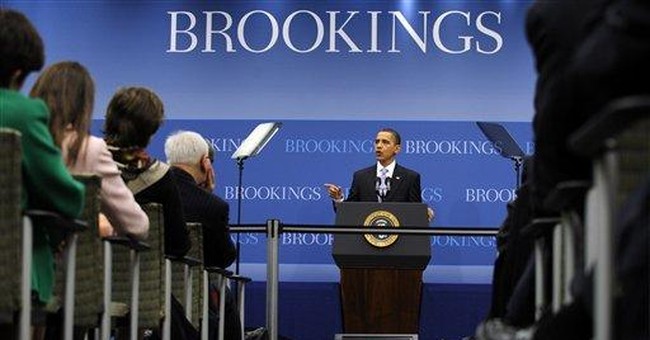 WASHINGTON -- You know the foreboding you feel while watching the steamier Greek tragedies, when dynasties are falling and sons are marrying their mothers and everyone is behaving badly and you are thinking: Really, things cannot continue like this.

Washington feels that way on the rare and fleeting occasions when it really thinks about the nation's looming crisis of public finance. The crisis, which is obvious and inevitable, combines unfulfillable entitlement promises and unsustainable budget deficits. So Washington is succumbing, yet again, to an idee fixe, which is usually, and in this case, scary.

The awful idea is for Congress to divest itself of the core competence that the Constitution vests in it -- the power to make the taxing and spending choices that shape the nation. This power would be given to an 18-member panel assigned to solve the budgetary crisis.

Under legislation drafted by Sens. Kent Conrad, D-N.D., and Judd Gregg, R-N.H., and endorsed by 33 other senators, the Bipartisan Task Force for Responsible Fiscal Action would be composed of 16 members of Congress (four each selected by the House speaker and minority leader, and the Senate majority and minority leaders) plus the Treasury secretary and someone the president selects. The panel would propose spending cuts and tax increases to put the government on a glide path to solvency. The menu of proposals would be guaranteed an up-or-down vote -- no amendments permitted -- in both houses of Congress.

This is patterned on the commissions that were charged with deciding which military bases -- more of 300 of them, it turned out -- would be closed after the Cold War, a problem deemed too threatening to local sensibilities for Congress to cope with it. The Conrad-Gregg task force is the latest iteration of the "let's-all-hold-hands-and-jump-off-the-cliff-together" school of government, with this difference: Closing bases is small beer compared to the task force's sweeping mandate.

There are two objections -- each is sufficient -- to the task force. One is procedural, the other is substantive.

Regarding procedure, consider a sentence in a Fiscal Times story in The Washington Post on the task force idea, a sentence that seems bland only because of this city's advanced state of constitutional decadence: "The White House has been talking to Congress to try to craft a proposal that would not wholly relinquish congressional control over major decisions on taxes and spending." Wholly? The oath of office for representatives and senators does not commit them to partially or occasionally or when convenient "support and defend," and bear "true faith and allegiance" to, the Constitution and "faithfully discharge the duties" of their offices.

Substantively, the task force would be a means of conscripting Republican participation in huge tax increases. There are precedents. The 1983 Greenspan Commission that "fixed" Social Security permanently (permanence is not what it used to be) involved large and immediate tax increases and small and delayed trims to benefits. The year after the 1990 budget summit, which resulted in President George H.W. Bush's renunciation of his "no new taxes" pledge, the budget deficit almost doubled.

Were the Conrad-Gregg task force to come to a consensus, it almost certainly would be that Congress must make the supposedly "difficult choice" of spending more of other people's money. Fortunately, the task force probably would be paralyzed by the requirement that its proposals must be endorsed by at least 14 -- 78 percent -- of its members. Given the difficulty of getting 60 percent of the Senate to agree on anything important, a 78 percent consensus on raising taxes and cutting entitlements will be extremely elusive.

Year one of the Obama administration was devoted to deliberately exacerbating the fiscal crisis. The gusher of spending, combined with the new multi-trillion-dollar health care entitlement, is half of liberalism's plan to radically and permanently increase government's grasp on the nation's wealth. As a response to the crisis, the task force would produce the other half.

Armies on the march are supposedly no match for an idea, especially a bad one, whose time has come. But what armies cannot defeat, monetary incentives might. So, the Gregg-Conrad legislation should be amended to include this language:

"During the life of this task force, which will perform Congress' fundamental duties, all senators and representatives will be considered on vacation and will not be paid. If the task force's recommendations are accepted by Congress, there will be no congressional pay until 2050."

This would be a Madisonian measure, altering incentives in order to encourage responsibility. Let's vote.