Another Entitlement for Seniors 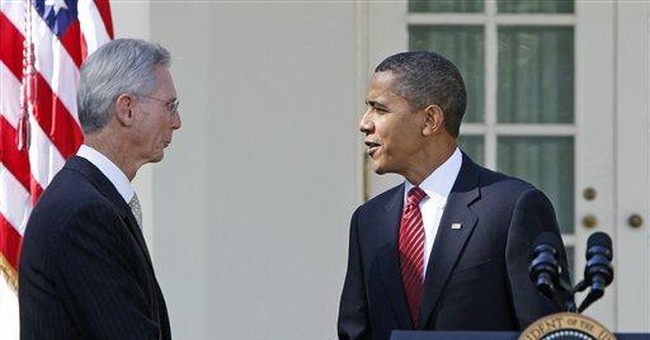 WASHINGTON -- Three years before Rep. Wilbur Mills, the Arkansas Democrat who then chaired the Ways and Means Committee, had his fling with a stripper named Fanne Foxe, aka "The Argentine Firecracker" (Mills joined her on stage at Boston's exquisitely named Pilgrim Theater, which specialized in what Time magazine primly called "ecdysiast exhibitions"; this was after he had a fracas with Ms. Foxe that provoked her to jump into Washington's Tidal Basin across from the memorial to Thomas Jefferson, who really believed that democracies could behave rationally), he decided seek the Democrats' 1972 presidential nomination. So in an almost admirably straightforward attempt to buy the votes of the elderly, he successfully championed an automatic COLA -- cost of living adjustment -- for Social Security.

Barack Obama has now established Mills' Social Security COLA as the capstone to the architecture of the entitlement culture that is modern liberalism's crowning achievement: It is an entitlement to which you are entitled even when you are not entitled to it. Obama says 57 million Americans -- every Social Security beneficiary and some other recipients of federal entitlements -- are entitled to $250 apiece to assuage the disappointment of having not been injured by inflation. Because the cost of living declined 4 percent last year, the 57 million are not entitled to the actual COLA, but they evidently are going to be declared entitled to monetary consolation for the misfortune of not experiencing misfortune.

This is the second continent-wide shower of $250 checks. The first came from the $787 billion stimulus package enacted in February. There will not be another such shower, until the next one.

In January, retirees received a 5.8 percent COLA, the largest since 1982, primarily because of a surge in energy prices, which since then have declined. Furthermore, after lifetimes of accumulation, Americans over 60 have the highest net worth of any age cohort. So why the special solicitude for them during an economic downturn that has afflicted almost everyone?

Obama says "we must act on behalf of those hardest hit by this recession." But are they the hardest hit? How does he know? By what measure? Is it possible that, say, the millions who have lost jobs have been hit harder than retirees?

Andrew Biggs of the American Enterprise Institute notes that a "lost" COLA can mean a significant increase in the value of retirees' entitlements. Because falling prices increase the purchasing power of stable benefits, and because many Medicare premium increases are limited in years in which no COLA is paid, the typical retiree's purchasing power will be almost $725 higher next year.

More than 40 percent of the voters in 2008 were at least 50 years old. Perhaps Obama can do better than Mills did at purchasing the affections of the elderly. He needs to because they are especially unenthralled about his plans for their health care.

But about one thing, they should relax. A president who cannot resist dispensing a semi-COLA after the cost of living declines will not really fund a substantial portion of the new health care entitlement by cutting more than $400 billion from Medicare. And speaking of the unbelievable:

Maine Sen. Olympia Snowe is being beatified as the incarnation of bipartisanship because, of the 217 Republican senators and members of Congress, only she cast a vote for a Democratic health care addition to the nation's Ponzi entitlement structure. Yet in 2005 she opposed a Republican plan for shaving just $10 billion from government health care entitlements over 10 years. If, as seems probable, she would have opposed the health care bill she just voted for if Republicans had proposed it, does that devalue her version of bipartisanship?

Perhaps the 57 million $250 handouts should be seen as a down payment on a stealthy Stimulus III, which Democrats do not have the audacity to advocate candidly. In any case, Obama, whose inaugural address was a summons to "responsibility," does not even feign an intention to pay for them with offsetting economies. The money will be borrowed, much of it from abroad, much of that portion from China. Fortunately, foreigners have unlimited appetites for lending to America. Don't they?