Could a Wave be Building?

George Will  |  Oct 15, 2009
The opinions expressed by columnists are their own and do not necessarily represent the views of Townhall.com.
Top Columns
Trending on Townhall Media 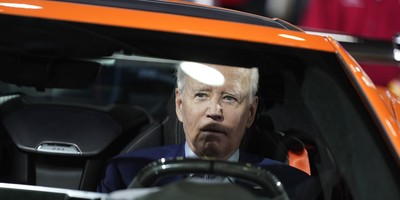 WASHINGTON -- Demure Delaware was the first state to ratify the Constitution, but since then has not made many waves. It might, however, be part of a political wave a year from now, thanks to a direct descendent of Benjamin Franklin.

The great man's great-great-great-great-great grandson, Mike Castle, 70, a nine-term Delaware congressman, will be next year's Republican nominee for the Senate seat Joe Biden held for 36 years. This and other candidate-recruitment successes make it reasonable for Republicans to hope that in January 2011 the Senate will contain fewer than 60 Democrats.

Biden's seat is currently occupied by a former Biden staffer who, in service to the ancient notion that public offices should be family patrimonies, will disappear when Biden's son Beau, 40, runs. He is the state's attorney general and has just returned from serving in Iraq with his Army National Guard unit. Delaware has not elected a Republican senator since 1994, but Castle, who has never lost a race, has run statewide 12 times: Once for lieutenant governor, twice for governor and nine times for the state's only congressional seat. In the last four elections he averaged 65 percent of the vote.

In 2010, each party will be defending 19 Senate seats. The high number of 38 reflects the fact that six of today's 100 serving senators were appointed, not elected -- one each from Massachusetts (Ted Kennedy's replacement), New York (Hillary Clinton's replacement), Illinois (Barack Obama's replacement), Colorado (the replacement of Ken Salazar, who became Interior Secretary), Florida (the replacement for Mel Martinez, who quit) and Delaware.

In Colorado, where Democrats have won the last two Senate races, the appointed Democrat, Michael Bennet, faces a primary challenger, Andrew Romanoff, a former speaker of the state House. Annoyed because the governor did not appoint him to replace Salazar, Romanoff spurned the plea of a future Nobel Peace Prize winner that he not challenge Bennet. The Republican nominee might be a former statewide winner -- Jane Norton, who was lieutenant governor.

In Illinois, which has not elected a Republican senator since 1998, the front-runner for the Republican nomination is Mark Kirk, a five-term congressman from the Chicago suburbs, where statewide elections often are decided. He annoyed his party by voting for the cap-and-trade legislation, but has sort of semi-apologized.

Connecticut's Sen. Chris Dodd, seeking a sixth term, has an approval rating of 43 percent and has drawn several serious Republican challengers. Any incumbent with a job approval below 50 percent should worry; Nevada's Harry Reid's is below 40.

Regarding House elections, substantial Republican gains are possible. As analyst Charles Cook notes, 84 House Democrats represent districts that were carried either by George W. Bush in 2004 or John McCain in 2008, and 48 of those districts were carried by both Bush and McCain. These and other uneasy incumbents know that Congress' job approval is 22 percent.

Much can change, nationally and locally, before Nov. 2, 2010. But perhaps the most politically salient thing is unlikely to change: high unemployment. The Wall Street Journal recently reported that the economy, which has lost 7.2 million jobs since the recession began in December 2007, must create 100,000 a month just to match population growth. Joseph Seneca, a Rutgers economist, estimates that even if job creation were immediately to reach the pace of the 1990s -- an average of 2.15 million private-sector jobs were added each year, double the pace of 2001-2007 -- the unemployment rate would not fall to 5 percent until 2017.

September's 9.8 percent unemployment rate was the worst since June 1983. But robust growth began then and just 17 months later Ronald Reagan came within 3,800 Minnesota votes of carrying all 50 states. Reagan, however, was reducing government's burdens -- taxes, regulations -- on the economy. Obama is increasing them.

The possibility of Republican gains, especially in the Senate, helps explain why Obama is in such a rush to remake the nation and save the planet. His window of opportunity could be closing.