The Clintons Are Everywhere 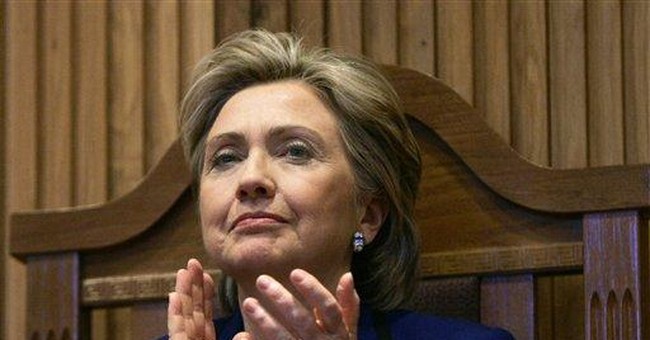 WASHINGTON -- In 1976, Fred Harris -- a populist precursor of this year's version of John Edwards, championed "the little people." When he finished fourth with just 10.8 percent of the vote in the New Hampshire primary, he cheerfully explained that the little people were too little to reach the levers on the voting machines. Soon Edwards will join Harris in the book of presidential trivia. (What presidential candidate was known as "Little Lyndon from Lawton"? Answer: Former Sen. Harris from Lawton, Okla.) Meanwhile, note this:

Although Edwards got just 18 percent of the vote in the Democrats' South Carolina primary -- which he won four years ago, beating John Kerry with 45 percent -- he received the support of half the white voters who made up their minds in the week before the voting. Many of these surely were recoiling from Hillary Clinton, who had been reduced to the role of surrogate speaker for her husband, the king across the water, restive for a Restoration with her tagging along.

The week before South Carolina voted was the week when, at last, even some Democrats noticed. Noticed, that is, the distinctive cloud of coarseness that hovers over the Clintons, seeping acid rain.

That cloud has been a constant accouterment of their careers, and has been influencing the nation's political weather for 16 years. But by the time Bill Clinton brought the Democratic Party in from the wilderness in 1992, the party had lost five of the previous six, and seven of the previous 10, presidential elections. Democrats were so grateful to him, and so determined not to resume wandering in the wilderness, that they averted their gazes to avoid seeing, and hummed show tunes to avoid hearing, the Clintons' routine mendacities.

Then, last week, came the radio ad that even South Carolinians, who are not squeamish about bite-and-gouge politics, thought was one brick over a load, and that the Clintons withdrew. It was the one that said Obama endorsed Republican ideas (because he said Republicans had some ideas). The Clinton campaign also accused Obama of praising Ronald Reagan (because Obama noted the stark fact that Reagan had changed the country's trajectory more than some other recent presidents -- hello, Bill -- had done).

This was a garden-variety dishonesty, the manufacture of which does not cause a Clinton in midseason form to break a sweat. And it was no worse than -- actually, not as gross as -- St. John of Arizona's crooked-talk claim in Florida that Mitt Romney wanted to "surrender and wave a white flag, like Senator Clinton wants to do" in Iraq because Romney "wanted to set a date for withdrawal that would have meant disaster."

Imitation being the sincerest form of flattery, the Clintons should bask in the glow of John McCain's Clintonian gloss on this fact: Ten months ago Romney said that President Bush and Iraqi Prime Minister Maliki should discuss, privately, "a series of timetables and milestones." That unremarkable thought was twisted by McCain, whose distortions are notably clumsy, as when Romney said, accurately, that he alone among the candidates has had extensive experience in private-sector business. That truth was subjected to McCain's sophistry, and he charged that Romney had said "you haven't had a real job" if you had a military career. If, this autumn, voters must choose between Clinton and McCain, they will face, at least stylistically, an echo, not a choice.

But that dreary scenario need not come to pass. Romney seems to have found his voice as attention turns to the economy, a subject concerning which McCain seems neither conversant nor eager to become so. And in South Carolina, Obama, more than doubling Clinton's 27 percent, won a majority of the votes, becoming the first person in either party to do so in a contested primary this year. He won a majority of men and of women, which pretty much covers the rainbow of genders. And he used his victory speech to clearly associate the Clintons with "the idea that it's acceptable to say anything and do anything to win an election" (hello again, Bill, you political ethicist who famously said "you gotta do what you gotta do") and "the kind of partisanship where you're not even allowed to say that a Republican had an idea -- even if it's one you never agreed with."

Obama is running against two Clintons -- or one and a fraction of one, given how much she has been diminished by her overbearing spouse. Romney is marginally better off running against a Clinton impersonator.