America's Economic Engine Will Defeat the Coronavirus, Not Fear

George Mullen
|
Posted: Mar 20, 2020 3:15 PM
Share   Tweet
The opinions expressed by columnists are their own and do not necessarily represent the views of Townhall.com. 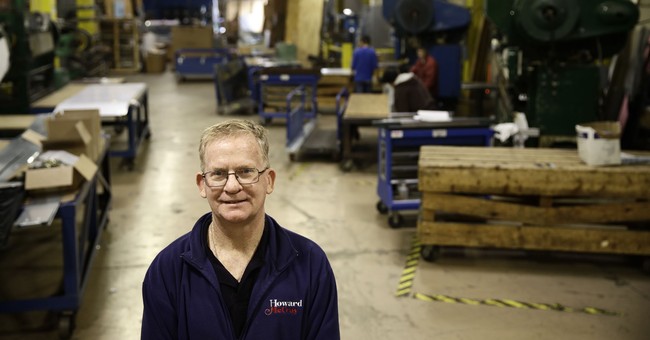 In order to defeat the Coronavirus we must restart America's economic engine — and we must do so now.  Continuing this fear-based economic shutdown is a mistake that will haunt America for decades.  The risk of a long-term global economic depression is rapidly rising.

Some may recall my 2016 Townhall article Reigniting America's Economic Engine whereby I asserted that doing so would take the Dow Jones Industrials to 30,000.  At the time the Dow was under 16,000.  President Trump was soon elected and proceeded to enact serious pro-growth policies.  A mere three years later, America’s economy was once again the envy of the world and by February 2020 the Dow was only a few hundred points shy of 30,000.

And then the Coronavirus hit us.  In short order, fear and panic have consumed our politicians, media, and public.  Within the past few weeks alone, the Dow has cratered to under 19,000 and America's $22 trillion economic engine has effectively been forced to shut down by our own government.

This economic shutdown is a new government experiment, and a dangerous one at that.  And it is doubtful it will work.  Furthermore, do Americans understand that most of us will ultimately be exposed to this virus anyway?  The goal is only to "flatten the curve", meaning slow the spread so our healthcare system can keep up.  An actual vaccine is at least a year off.

I don't doubt the seriousness of the pandemic.  However, I can't help but think about the cost of this economic shutdown, based on the fact that millions of livelihoods are in the midst of being eliminated.  Will all (or any) of these millions of soon-to-be-gone jobs return?  It's unlikely.

After only several weeks, entire industries are already on the verge of collapse — airlines, airline manufacturers (see Boeing’s stock chart), the cruise industry, automobile companies, travel businesses, hotels, restaurants, bars, and so on.  Marriott just touched-off the coming job cut avalanche with the announcement that they are laying off tens of thousands of employees.

Another month of this and our economy will be in ruins.  And, yet, leadership is saying this shutdown may continue until July or August.

The proposed $1 trillion stimulus package (more debt for our children and grandchildren) to combat this self-imposed economic freeze-up is chump change compared to the economic devastation underway.  Note that America's national debt is already over $23 trillion, and our leaders will be back before you know it calling for more money (debt) to fight the pandemic.  Think about it — $1 trillion is equivalent to about two weeks of U.S. economic output — a mere band-aid in view of the carnage.

Boeing, our airline industry, and other connected biggies, will be bailed out as systemically critical to our nation. Small businesses won't be though, despite what the politicians say.  And small businesses are the lifeblood of America’s economy — over 99% of all American firms are small businesses, employ 48% of our nation's workers, and account for 44% of all U.S. economic activity.  A proposed $2,000 government stimulus check given to each person is just another band-aid that won't stop the inevitable.  What happens to the millions of small businesses that will fail because of this government economic-shutdown experiment — most importantly, what happens to their employees and families?

This madness needs to end before it's too late.  This is real life — not a Hollywood pandemic movie.  Our economy must be reignited, and we must get back to work / school now — with new health guidelines, as well as large financial fines for those who go to work / school sick and endanger others.  Stringent health rules should be put in place until the threat passes, and identifiable hotspot locations should remain under lockdown.

The President should give consideration to declaring "success" in Stage One of this fight in having successfully slowed the spread of the virus and educated Americans about the need for social distancing.  Then simultaneously call for all healthy Americans to get back to work / school to reignite our economic engine for the national good.  Albeit, with a host of new health safety precautions in place.

The President could then launch a Stage Two effort of Churchillian proportions (with serious money and resources) to directly protect the most vulnerable parts of our population from the virus — meaning the elderly, chronically ill, and homeless.  Although most of our vulnerable people are of retirement age, we have astonishingly been embracing a strategy that is intentionally killing off the jobs of our working age people.  To quote General Anthony McAuliffe’s reply to the German demand for America's surrender at the Battle of the Bulge, this is "nuts".

Has anyone noticed that China, on the other hand, is working double-time to get their economy up and running?

Chinese companies (not their government) have created 'disinfectant tunnels', whereby a person walks through an arch and is sprayed with disinfectant mist from all sides. This is far better than shutting down your economy.  Where is the innovation Americans are known for?

Government is again proving itself to be more of a problem, than a solution.  Thus far, our government’s response has been fear-based by ordering Americans to stay home and shelter in place, effectively shutting down our entire economy.  The correct response is the exact opposite.  America’s mighty economic engine is geared to solve problems, provide answers to questions, and deliver supply where demand exists.  We should be encouraging our free-market economy to roar now like never before.  By doing so, we will rapidly see the arrival of vaccines, treatments and therapeutics; testing kits aplenty; new and creative disinfecting mechanisms; masks, gloves, ventilators, and ICU beds en masse; as well as every other needed supply, including enough toilet paper for those who still wish to hoard.

None of this can happen when we are ordered to stay home though.

After the September 11, 2001 terrorist attacks, the U.S. economy justifiably came to an abrupt halt as well.  President Bush and his administration recognized that getting the economy moving again was priority number one — without America's economic engine there wouldn't be money or resources to fund government operations, humanitarian aid, or military responses.  After considerable trial and error, the Bush Administration succeeded in reviving our economy.  Our focus today should be the same.

There are far better ways of fighting this pandemic — and reigniting America's mighty economic engine is the key to doing so.  If President Trump succeeds in restarting our engine, we will promptly defeat the Coronavirus and soon again be talking about Dow 30,000.

George Mullen is spearheading Sunbreak Ranch in the effort to end America's homeless crisis.  He is known as author of "The Coming Financial Tsunami" (2005) and "Welcome to the Bubble Economy" (2006) which accurately predicted the 2007-08 global economic crash.  He is a principal of StudioRevolution.com in San Diego, California.