Missile Defense to the Rescue! 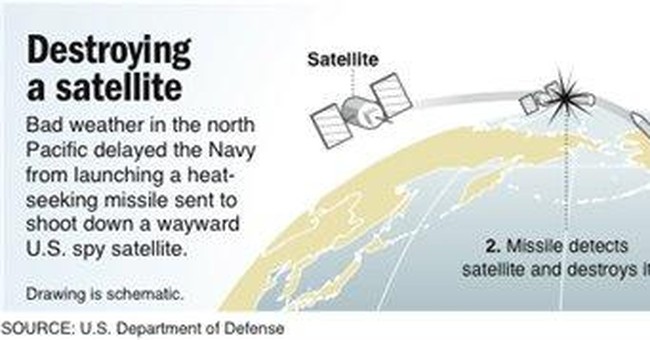 A malfunctioning spy satellite -- the size of a bus, weighing between 5,000 and 10,000 pounds, and carrying 1,000 pounds of highly toxic rocket propellent -- was falling back to earth. Because the malfunction occurred shortly after launch, the satellite's booster rocket propellent had not been expended so the tank was full and experts feared that satellite posed significant risk. That was the bad news.

But here is good news -- we have the technology to destroy the satellite before it falls to earth and we successfully used that technology to destroy the satellite before it could do any harm. Because the United States has a missile defense program, it has developed a layered missile defense system that gives the United States the ability to shoot down missiles. Some of that technology is based on Navy Aegis cruisers at sea and some of that technology is land-based in California and Alaska. Additionally, a complex network of high tech radar and tracking technology is employed to enable this defensive missile technology to track and destroy missiles that are moving at more than 15,000 miles per hour. Other technologies, such as the airborne laser, are under development and will give the U.S. even greater capacity to defend itself and allies from missile attacks.

However, now we see another use for this amazing technology. The Navy successfully shot down the malfunctioning satellite just before it entered the atmosphere -- about 150 miles up in space -- using a piece of our nation’s missile defense system. Destroying it too early while it was still in space would have left debris which is hazardous to astronauts, satellites, the space station, and future space exploration. But destroying the satellite right as it reentered the earth’s atmosphere allowed any debris to burn up.

The first shot was on target and it destroyed the malfunctioning satellite. If for any reason, the first shot had missed, there would have been time and opportunity for additional shots. But they were not needed. The system worked exactly as it was supposed to. This shows that missile defense is important, not only because it protects Americans from nuclear threats and nuclear blackmail, but also because this technology has other benefits and uses -- some of which we cannot predict or foresee.

What is amazing is that we have this technological capability. Shooting down an errant satellite just as it enters the earth’s atmosphere so as to minimize space debris yet destroying the satellite before it falls to earth is an incredibly difficult task. But then again, so is destroying an incoming intercontinental ballistic missile. To accomplish either feat, a complex system of radar must detect and track either the launch of an offensive missile on the other side of the earth or the malfunctioning satellite. Then an interceptor missile is launched. The interceptor locates and pursues the missile or satellite. Finally, at a closing speed in excess of 15,000 miles per hour (20 times the speed of sound), it slams into the missile or satellite, destroying it. The target is essentially vaporized.

America and the world is safer because the United States has the technology and the ability to shoot down missiles and malfunctioning satellites. Americans must demand that Congress continues to fund missile defense and to support the development of new defensive technologies and capabilities so that future risks -- some of which may not be known today -- can be shot down.

Too often short-term political pressures come to bear and critically important funding for tomorrow's national security is cut or compromised so that Congress can fund today’s politically motivated earmarks and pork. We simply cannot afford for shortsighted politics to limit or hamstring our future ability to defend ourselves. Our national security is simply too important and the price to be paid too high for failing to keep at least one step ahead of our enemies. History has repeatedly taught this lesson. Hopefully, Congress was not asleep during those classes.