A World Turned Upside Down: The Upshot and Downside to the Destruction of Notre Dame

Gavin Wax
|
Posted: Apr 24, 2019 12:00 PM
Share   Tweet
The opinions expressed by columnists are their own and do not necessarily represent the views of Townhall.com. 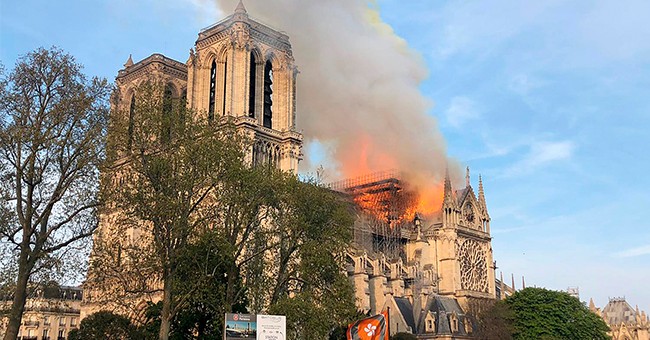 A stunning development took place last week. No, it wasn’t Holy Week—the holiest week for Catholics all across the world. No, it wasn’t the terrorist attack on “Easter worshippers” in Sri Lanka. No, it wasn’t even the burning of the Notre Dame Cathedral in Paris. It was the conversation that unfortunate fire sparked in the media.

For once political pundits were talking about things that matter—the unparalleled beauty of Gothic architecture, the unrivaled hideousness of modern design, the decline of Christianity in the West.

Imagine the average Fox viewer’s surprise turning on Tucker Carlson Tonight and hearing the eponymous host and Mark Steyn discussing topics that are usually the demesne of corduroy-clad academics and stuffy reactionaries.

Imagine if journalists and entertainers, instead of talking in circles over the political horserace, collectively decided only to address topics of importance, such as the kind of life we in the West wish to live and what this entails with regard to our religious practices, civil societies, architectural styles, immigration policies, and familial structures.

And make no mistake, this is not wishful thinking. Political and social media could easily make the shift to germane discussion, regardless of whether or not the general populace would be interested in hearing about it at first. We already know that whole television networks such as CNN spent over two years covering the Russia investigation, a subject the vast majority of the electorate didn’t care for.

Nor does it make any sense to claim that the days of intellectual discourse after the manner of William F. Buckley and Gore Vidal are a thing of the past---because they aren’t. As the conservative philosopher and rhetorician Richard Weaver said in his landmark 1948 polemic against modern thought, Ideas of Consequences:

"By thus assuming that we are prisoners of the moment, the objection well reveals the philosophic position of modernism. The believer in truth, on the other hand, is bound to maintain that the things of highest value are not affected by the passage of time; otherwise the very concept of truth becomes impossible. In declaring that we wish to recover lost ideals and values, we are looking toward an ontological realm which is timeless. Only the sheerest relativism insists that passing time renders unattainable one ideal while forcing upon us another."

All it would take for our public discourse to take on an intellectual bent would be for the media to will it. The public would follow suit.

If the media—also known as the fourth estate—really are the “gatekeepers” in terms of public discussion, it is undoubtedly their responsibility to discuss the most pressing issues of our time. If they fail to do this, there is no real distinction between The New York Times and a tabloid rag.

But all-too-predictably, the momentary flash of insight into Western civilization’s precarious situation is already disappearing. The blinders are coming back on as the conversation shifts from topics of substance to sexy nonthingburgers like the Mueller report.

Now our veritable overlords in the media want us to discuss a topic of far less consequence than the death of God, namely, what exactly to replace the collapsed spire of Notre Dame with. A “diverse” piece of architecture? A cube? Certainly not another spire. The country that birthed feminist philosopher Simone de Beauvoir would never think of rebuilding the spire, a veritable symbol of the “phallogocentric order,” not to mention toxic masculinity.

(What irony that Sir Roger Scruton—the foremost evangelist of beauty in the English-speaking world—was unceremoniously sacked from a British architectural planning commission!)

Putting aside this lamentable regression into ignorance, we must ask ourselves another question: What does it say about the state of our culture that concerns about Beauty and God only surface in the wake of the devastation of a massive tourist attraction? Because that’s exactly what the Notre Dame Cathedral has become—something for millions of foreigners to ogle at. Not a sacred space and place of worship. Not a living representation of humanity’s aspiration to God. Simply a dead letter representing a dead spirit—the dead spirit of Christianity.

We live in a world where millions now mourn the loss of a monument with which they are only familiar because of a popular novel by Victor Hugo, a world where several billionaires and tech companies have pledged millions of dollars to restore a symbol of a faith they have very little, if any, connection to.

Ultimately, such a world as this—a world in which the destruction of a cathedral whose chief function was bringing in millions of euros of revenue for the French government and City of Paris is what it takes to enflame our interest in the religion and style of our ancestors—is a world that has been turned upside down.