Gabriella Hoffman
|
Posted: Feb 05, 2016 12:01 AM
Share   Tweet
The opinions expressed by columnists are their own and do not necessarily represent the views of Townhall.com. 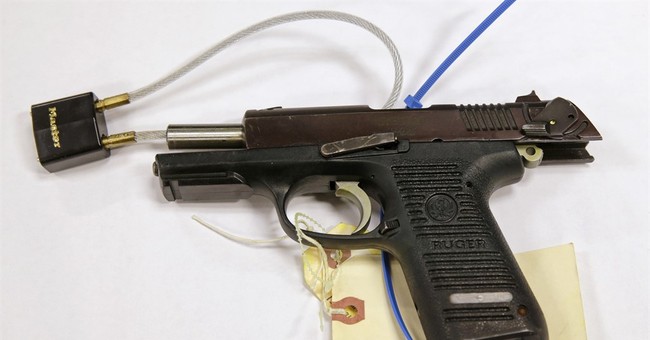 A small but important Second Amendment victory was handed to one aspiring cop in New Jersey last week.

A former private security guard, Josey-Davis had his firearms privileges restored on January 29, 2016, after a being arrested in September 2013 and subsequently charged with a felony.

Josey-Davis is one of many people whose lives have been adversely affected by draconian anti-gun laws in deep-blue states. His miraculous victory—which has been largely ignored by civil rights groups and the media—is a repudiation of gun control policies that criminalize legal gun owners like him.

Then a private security guard, Josey-Davis was charged with a felony on September 20, 2013, for leaving his legal firearm in his car after being pulled over for a minor traffic violation. He forgot he placed his 9mm Smith &Wesson handgun inside his car’s glove compartment after his 6-year-old sister came into the garage. After being pulled over, Josey-Davis was arrested for possessing a loaded albeit legal firearm without a permit in his glove box. Steffon was then charged with a felony, barred from voting, and barred from purchasing firearms—facing similar penalties awarded to hard criminals. He was also disqualified from most jobs and nearly had his dreams of becoming a cop crushed.  He was finally pardoned by Governor Chris Christie (R-NJ) on June 8, 2015.

“To my knowledge, right after I was pardoned by Governor Christie, I didn't attempt to purchase any firearms since my arrest. I went to purchase a Savage Axis 30-06 on January 28th. I was delayed for a day or two and I was then approved after I made a few phone calls to my lawyer’s office as well as the governor’s office,” said Josey-Davis in an email.

“This is a victory for our Second Amendment community,” he said. “Someone who legally possessed a firearm, losing his Second Amendment rights, becoming a felon, being pardoned and getting his rights to purchase firearms again in the state of New Jersey is very rare.”

Josey-Davis also applauded Governor Christie for clearing his name of any wrongdoing.

“Governor Christie is doing a good job with helping individuals who fall victim to draconian firearm laws in the state by giving them another chance to regain a God-given right. New Jersey still needs work, we have a God-given right to bear arms and need the right to carry our firearms. It's unconstitutional. I feel it's getting better day-by-day because our community is getting stronger every day,” said Josey-Davis.

New Jersey law requires those in possession of firearms while driving to store them unloaded and locked in the trunk. It’s considered one of the most draconian, invasive gun control policies in effect.

Interestingly enough, Governor Christie supported a so-called assault weapons bans and greater restrictions on firearms during his first gubernatorial run in 2009. However, since declaring his run for president in 2015, he suddenly shifted away from his previous positions. Time will tell if it’s rooted in political expediency or if it’s genuine.

Now that he has been pardoned and had his firearms privileges restored, Josey-Davis has resumed the process of becoming a police officer: a life-long goal of his. Despite the legal challenges he faced over the last few years, Steffon remains optimistic about entering law enforcement and is grateful to be exonerated.

“Everything I'm doing now consists of remaining humble, patient and requires a lot of dedication,” he said. “I don't see myself having any other obstacles ahead of me. The only ones I see being in the way would be ones I create for myself and that's not the case here. I have a nation behind me that wants to see me succeed. I owe my success to those who supported me through my difficult time.”

What’s next for Josey-Davis? He hopes to finally reclaim his Smith & Wesson M&P Shield seized from him by the Middlesex County Courthouse in New Brunswick, New Jersey, over the next few weeks.

It’s bizarre to see law-abiding citizens like Steffon Josey-Davis, who aspire to serve and protect this country, penalized by draconian laws that fail to target and prosecute criminals. Gun control policies are being wholly rejected nationwide, but still have a stronghold in major cities and deep-blue states. Cases like Josey-Davis’ should inspire Americans to challenge and defeat gun control policies at the ballot box.