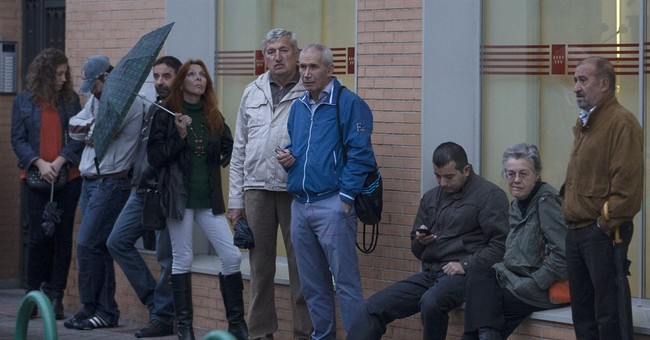 By publication of this column the BLS will have reported the number of jobs created in November and the unemployment rate. Are those numbers dependable? Not if you understand the perverted methodology for calculating the rate, understanding this is a political report more than an economic report.

For example over one million people are about to lose their extended unemployment benefits which would send the unemployment rate plunging when they are no longer counted. Wow what an amazing job of lowering the rate! Great for political propaganda, but not so much for people jobless and losing benefits.

We also learned that an employee at Census decided to make up the number of employed people just in time for the 2012 elections causing the unemployment rate to miraculously fall below 8% in September .

Doesn't that skew all following reports when you start with a false basis?

Regardless ADP estimates 215,000 private sector jobs were created in November. What is it about November and December every year that spikes employment numbers? Oh yes, Christmas and up to 40% of annual retail sales.

Brick and mortar Black Friday sales, held on Thursday and Friday, were reported down by 3% YoY while Cyber Monday increased almost 20% YoY. Did they include health insurance purchases on the Obamacare website? The most ineffective, insecure, costly site ever constructed by a crony Solyndra type firm? The 'free market' at work?

Guess retailers add employees just as trees shed their leaves every year about this time, but you should consider this a sign of growth and positive momentum in the labor force. The number of Santa Claus jobs are up 300% compared to the number of Santa jobs this past July. The Obama administration is studying this phenomena for clues on how to increase employment in other job categories.

Once again jobs will be key to housing sales. Will President Obama's attack on income inequality create good full time living wage jobs? Will those jobs offset the millions eliminated or cut to part time due to Obamacare which fuels income inequality? Who to believe? What to believe?

Perhaps these data points on housing may tell us the tale heading into 2014. From ZeroHedge:

"In September new home sales declined from 379K to 354K annualized, or the lowest since early 2012, the subsequent rebound sent New Home Sales to 444K, or a 90K increase, +25.4%, in one month (October) was the biggest month over month jump since May 1980! What was less noted is the prior revisions, with June revised 0.9% lower, July down 4.4%, and August revised by a whopping 10% lower. So what caused the October surge?

Headline writers had fun reporting that building permits jumped to their highest since June 2008 in October. Read the fine print, based solely upon multi-family permits. Single family permits increased by 1,000 to an annual rate of 621,000 or about half of 'normal'.

The real tell tale indicators, at least for the beginning of 2014 housing sales lay in two reports from this past week. Mortgage applications fell by 50% to almost the low of 2008, and pending sales fell for the fifth consecutive month for the biggest YoY decline since April of 2011.

But we are not to be concerned because Obamacare's website is performing at private sector levels with nearly 35,000 an hour capacity closing in on Walmart's 400 million, income inequality, the secret to job growth, tearing down the successful making them more equal to the less successful will certainly create jobs, and combined with raising the minimum wage we will see the job market humming and home sales flowing in 2014.

Or as Friedrich Von Hayek said; "If Socialists understood economics, they wouldn't be Socialists."

The opinions expressed here are solely those of Fritz Pfister or identified sources, and not necessarily those of RE/MAX Professionals of Springfield or RE/MAX International. Fritz Pfister hosts Your Daily Dose of Reality weekdays at 9am central at Wmay.com or AM 970 in central Illinois.

Greg Gutfeld Savages Libs Who Took His Joke from 'The Five' Way Too Hard
Townhall
So about that dance squad ... sorry ... 'Patriot Front' group in khakis marching around with shields and riding off in their U-Hauls, it just gets dumber
Twitchy
AOC Claims Those Organized Smash and Grabs on Stores You're Seeing Aren't Real
Redstate
A 'Post-Outrage World': Abortion Won't Be the Winning Issue Democrats Think It Will Be
PJ Media