The Party of God? 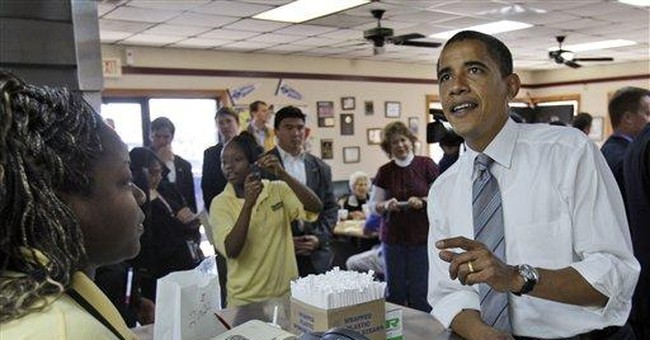 So if Bill Clinton had only talked more about monogamy, most voters would have thought he was the model husband?

Since the media allows liberals to get away with this kind of hypocrisy, it’s no wonder Biden and the Democrats believe that as long as they talk about God, they don’t actually have to do anything He says. This is exactly the kind of hypocrisy Jesus warned us about.  He saved his sternest rebuke for the religious politicians of his day (the Pharisees) who talked a good game but whose hearts were far from God.

I don’t know the hearts of Obama, Biden or their fellow Democrats, but Jesus said, “You will know them by their fruits.”  And by their fruits, it’s no wonder the Democrats are not seen as the “Party of God.”  The positions they advocate are diametrically opposed to the Bible, “Nature’s Law” (the basis of the Declaration of Independence), and the convictions of most religious people.

First and foremost, Obama and the Democrat party do not value life.  They are not pro-choice, they are pro-infanticide. They support the horrific procedure called partial-birth abortion.  That’s where a full-term baby is partially delivered from her mother, only to have scissors jammed in the back of her skull and her brains sucked out.  Despite his denials, Obama even voted to refuse medical treatment to babies who are born alive from a failed abortion.  And if he becomes president with a liberal congress, Obama has said that his first act will be to sign the “Freedom of Choice Act.” That act will undo every modest abortion restriction in the land-- partial-birth abortion and parental notification laws will be nullified, and the Hyde Amendment will be reversed which will force taxpayers to pay for abortions!

Second, the Democrat party refuses to protect the foundation of civilized society—marriage between a man and a woman. While Obama officially says he’s not for same-sex marriage, he has pledged to repeal the Defense of Marriage Act which protects states from having same-sex marriage imposed on them by other states.  Inexplicably, Obama believes that the Sermon on the Mount somehow mandates gay civil unions (he tells us to overlook that “obscure passage in Romans”). Furthermore, Obama wants to enact a law that may force churches to hire homosexuals.

On abortion and marriage Obama and the Democrats are clearly not the “Party of God.”  Moreover, they have no moral high ground on Iraq as I’ve written in Jesus and the Case for War.  And on two other key issues-- education and the poor-- Democrats want the right ends but use the wrong means.

For all their talk about “choice” on the abortion issue, Obama and the Democrats are opposed to choice when it comes to education.  Why should a mother have the choice to kill her children, but not the choice of where to educate them?  After all, we’re talking about the education of her children with her tax dollars. While Obama and many of his supporters in the Democrat party are rich enough to send their own kids to private schools, they want to keep the masses without a choice in failing, dangerous and politically-correct public schools—this despite the fact that vouchers actually work.  Competition works everywhere it’s tried, but the Democrats don’t want to take that chance.

Finally, while Obama and the Democrats say they want to help the poor, virtually everything they do makes the plight of the poor worse.  Their tax, welfare, and anti-school-choice policies don’t spread wealth, they spread misery.  They also spread dependency on Democrats, which may be the ultimate reason why Obama, Biden and the Democrats will never do anything to become the “Party of God.”  They’ll only talk about it and hope enough religious voters don’t notice their lack of fruit.