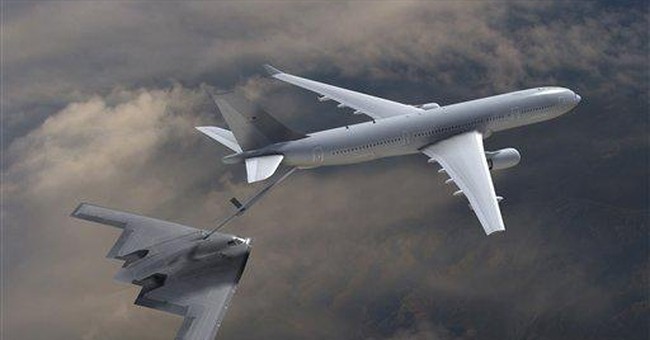 The Pentagon has had a dirty little secret for years now: Foreign suppliers are an increasingly important part of the industrial base upon which the U.S. military relies for everything from key components of its weapon systems to the software that runs its logistics. With the Air Force February 29 decision to turn over to a European-led consortium the manufacture and support of its tanker fleet – arguably one of the most important determinants of America’s ability to project power around the world – the folly of this self-inflicted vulnerability may finally get the attention it deserves from Congress and the public.

The implications of such dependencies were made clear back in 1991 during Operation Desert Storm. In the course of that short but intense operation, American officials had to plead with the government of Japan to intervene with a Japanese manufacturer to obtain replacement parts for equipment then being used to expel Saddam Hussein’s forces from Kuwait.

The obvious lesson of that experience seemingly has been lost on the Pentagon. In the nearly two decades that have followed, it has sought to cut costs and acquisition timelines by increasingly utilizing commercial, off-the-shelf (or COTS) technology. Under the logic of “globalization,” COTS often means foreign-supplied, particularly with respect to advanced computer chips and other electronic gear.

Such a posture raises obvious questions about the availability of such equipment should the United States have to wage a war that is unpopular with the government or employees of the supplier. Then there is the problem of built-in defects such as computer code “trap doors” that may not become obvious until the proverbial “balloon goes up” and disabling of U.S. military capabilities becomes a strategic priority to foreign adversaries, or those sympathetic with them.

Even the Pentagon and intelligence community recognized that this sort of train-wreck was in prospect had Huawei, a company with longstanding ties to the Chinese Peoples Liberation Army, been allowed to buy 3Com. The latter’s “intrusion prevention” technology is widely used by the U.S. government to provide computer security in the face of relentless cyber attacks from, among others, Communist China.

Now, unfortunately, the Air Force has set in motion what might be called a “plane-wreck.” Opposition is intensifying on Capitol Hill, on the presidential hustings and across America to the service’s decision to make the European Aerospace, Defense and Space (EADS) consortium the principal supplier of its aerial refueling capabilities for the next fifty years.

There appear to be a number of questions about the process whereby the decision was made to reject the alternative offered by the Nation’s historic supplier of tanker aircraft – the Boeing Company. These questions (for example, concerning the ability to operate on relatively short and austere runways) seem likely to result in that corporation protesting the source-selection of a much larger Airbus aircraft over Boeing’s modified 767.

Even more telling, however, may be other considerations that argue powerfully against a reliance on the EADS-dominated offering. A number of these were identified in a paper issued by the Center for Security Policy in April 2007 and re-released last week but were evidently not taken into account by the Air Force:

* One of the owners of EADS, the government of France, has long engaged in: corporate other acts of espionage against the U.S. and its companies; bribery and other corrupt practices; and diplomatic actions generally at cross-purposes with America’s national interests.

* The Russian state-owned Development Bank (Vneshtorgbank) is reportedly the largest non-European shareholder in EADS with at least a 5% stake. It is hard to imagine that, at a moment when Vladimir Putin and his cronies are becoming ever more aggressive in their anti-Americanism and efforts to intimidate Europe, we could safely entrust such vital national security capabilities as the manufacture and long-term support of our tanker fleet to a company in which the Kremlin is involved.

* The enormous U.S. taxpayer-financed cash infusion into EADS will probably not only translate into more money for the slush funds the company has historically used to bribe customers into buying Airbus planes rather than Boeing’s. It will also help subsidize the Europeans’ space launch activities – again at the expense of American launch services.

* EADS has been at the forefront of European efforts to arm – over adamant U.S. objections – Communist China, Hugo Chavez’s Venezuela and Iran.

* As the Center for Security Policy paper points out: “Through its aircraft production division, EADS is a huge jobs program for anti-American labor unions that form the backbones of some of Europe’s most powerful socialist parties. By purchasing products that employ these workers, we will be feeding those who would rather bite our hand than shake it.”

These and other aspects of the selection of the Airbus tanker (notably, preposterous claims about the number of American jobs that will be created by contracting out our tanker fleet to the Europeans – ) seem to assure that this decision will indeed be a political plane-wreck. The tragedy is that the replacement of our obsolescent aerial refueling fleet has already been unduly delayed. The further deferral that now seems inevitable may mean that we wind up literally sacrificing aircraft and their crews, or at least the national power-projection capability we need while this mess is sorted out.