Frank Cannon
|
Posted: Feb 08, 2018 12:01 AM
Share   Tweet
The opinions expressed by columnists are their own and do not necessarily represent the views of Townhall.com. 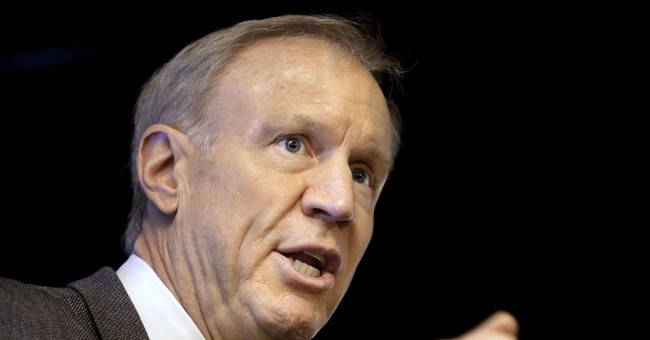 Last December, National Review memorably called Illinois Governor Bruce Rauner the “Worst Republican Governor in America” in a provocative cover story. To say Rauner has disgraced Abraham Lincoln’s legacy would be an understatement, and his underwater approval ratings would suggest his constituents agree.

It should come as no surprise, then, that he is facing a primary challenge this spring from upstart conservative hopeful Jeanne Ives, in a race which highlights an increasing change of direction within the GOP. To better understand this trend, it will help to take a closer at this race and the contrast between its two candidates.

First is the aforementioned Rauner, who won a reliably blue state in 2014 by crusading against a 67 percent tax increase and the disastrous consequences of billions in debt. Despite having a past record of liberal views, Rauner was able to gain the trust of conservatives by vowing he had “no social agenda” -- a promise which proved enough to push him over the top in a close election.

Nevertheless, since taking office Rauner has embodied everything that is rotten about the party’s establishment. He ran as a fiscal conservative promising to clean up corrupt practices in the State Capitol, only to cave when pressured by intransigent Democrat leaders. His surrender was total: of the 44 policy items on Rauner’s much vaunted “Turnaround Agenda,” he managed to achieve exactly zero, while giving the Democrats much of what they wanted.

Furthermore, the real betrayal for conservatives came last fall, when the governor signed a bill requiring Illinois taxpayers to fund abortions -- going back on his “no social agenda” pledge. It was the most prominent illustration of his untrustworthiness, though in this, he is not much different than many of his fellow Republicans.

In fact, Rauner’s shortfalls noticeably mirror those of the party establishment he represents. This corporate wing of the party, while claiming to be conservative, has long operated like a watered down version of their Democrat counterparts. Although these Republicans run on an economically conservative platform, results matching their campaign rhetoric have rarely materialized – just consider the progress the GOP has made repealing Obamacare or reducing the national debt, to take the most visible examples. Meanwhile, these party leaders continually call for a “truce” on social issues, and consequently surrender to Democrats whenever such issues do find their way onto the agenda.

Despite their ineptitude, this corporate wing has managed to maintain its dominance over the party thanks to the conventional wisdom that only its own candidates – those who propound a primarily economic message while raising the white flag on social issues – can win elections. In 2016, however, President Donald Trump finally upended this logic, winning with an unabashedly conservative message and fighting back on issues, such as abortion, the party establishment had previously been unwilling to touch.

Now, in Illinois, there appears to be a candidate willing to replicate the Trump playbook: Jeanne Ives.

Ives, a conservative lawmaker, West Point grad, and mom of five, has shown an early willingness to take on Rauner and the party establishment where they are most entrenched and least popular. An ad released by her campaign last week attacking Rauner for his support for taxpayer funded abortions, opening public restrooms to members of the opposite sex, and big business-friendly policies has drawn strong rebukes not only from the Rauner campaign but from the Illinois state party chair and GOP state attorney general as well – a sure sign she is on the right track.

And, just like Trump during his campaign, Ives has refused to back down, despite the cries of outrage from the powers that be. She understands intuitively, as Trump did, that apologizing and staying silent on certain issues doesn’t neutralize them. On the contrary, backing down from issues like abortion and the gender wars allow the Left to take control of the narrative, defining conservatives as extremists while paying no political price for their own radicalism. In order to win, the best and only option is to fight back.

But while Ives’ early salvos have earned her the ire of the elites of both parties as well as those in the media, observers should not make the same mistake with her as they did with Trump. Political fighters like President Trump and Jeanne Ives, those willing to stand up to the establishment and advocate for social conservative and economically populist policies favored by voters, are the future of the Republican Party. And Bruce Rauner seems likely to join Mitt Romney, Jeb Bush, and other well-funded but failed candidates as another dinosaur of the GOP’s soon-to-be-forgotten corporatist past.

That makes this Illinois primary race one of the most interesting -- and important -- to watch as we head toward Election Day 2018. Stay tuned.