Trump's Path to 270 Is Easier Than You Think

Frank Cannon
|
Posted: Oct 28, 2016 11:30 AM
Share   Tweet
The opinions expressed by columnists are their own and do not necessarily represent the views of Townhall.com. 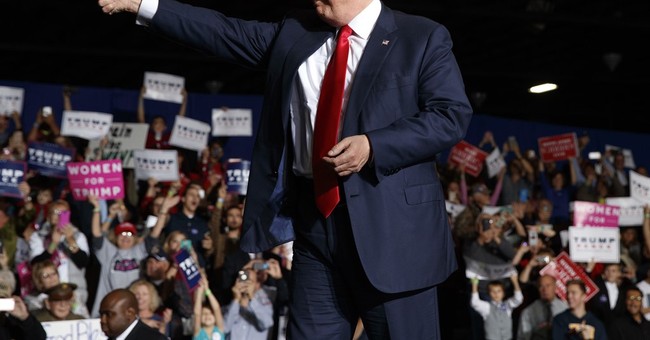 Trending
Editor's Note: This piece was co-authored by Jon Schweppe.

"It's over. Trump can't win." That's the narrative the Clinton campaign and the mainstream media have relentlessly promoted over the past several days. The problem with that narrative is that it is a bald-faced lie. This election is nowhere near over. Not even close!

Let's take a look at the electoral map. Remember, to become the next president of the United States, Trump needs to win 270 electoral votes. Conversely, he needs to hold Hillary Clinton to 269 electoral votes because, with a Republican House of Representatives, a 269-269 tie is likely to also result in a Trump presidency.

If this is a fixed reality, Trump must win the following states to get to 265 electoral votes (ordered from easiest to win to most difficult):

Utah just became a battleground state as Independent candidate Evan McMullin has been surging recently. It truly is a three-way race at the present. The most recent poll, conducted on October 23 and 24 by Heat Street/Rasmussen, gave Trump a narrow 32-29-28 lead over McMullin and Clinton, respectively.

Georgia is close, but Trump has led in 14 of the last 15 polls dating back to early August (and the other poll was a tie). While his lead is within the margin of error, barring a Clinton blowout, Trump should safely win here.

Iowa is one of several states that suffers from a lack of polling. The most recent poll from Quinnipiac, released on Thursday — the first public poll in three weeks! — showed Trump and Clinton tied at 44 percent. Iowa is poised to be the true bellwether state this election cycle, and without more data, it is difficult to tell which way Iowa is preparing to break.

The five most recent polls out of Ohio show Trump tied with Clinton or leading. He has performed well here since the end of August. While the race is still very close, Trump's working class appeal is likely to help him win a blue collar state that Mitt Romney could not.

Arizona hasn't seen a whole lot of polling, but the latest poll from Monmouth showed Trump up by 1 percent, 46-45, conducted October 21 through October 24. Arizona is typically a "red state", but polls have consistently shown it as a true toss-up.

I have never seen such a blatant effort by the mainstream media to call a state that is polling within the margin of error. It's absolutely crazy to me. Florida is one of the most swingy swing states out there, yet pundit after pundit has declared the race over in the Sunshine State. Ridiculous. It’s very close. Clinton has never led by more than five in any poll taken since August, and in the most recently released poll by Bloomberg, Trump led by two points, 45-43. Trump can easily win Florida.

Nevada is notoriously difficult to poll, which may help explain some of the wild fluctuations between polls — two credible polls conducted last week over the same time period came up with Clinton +7 and Trump +3. Still, Nevada is a state that Trump probably needs to win, and he appears to be within striking distance of doing so.

If Trump can pull all of this off, that would get him to 265 electoral votes. He is within three points in each of the states just mentioned.

Then we have three states (and a district) remaining:

If Trump wins Pennsylvania, it gives him room to lose one of the smaller battleground states above, like Nevada or Arizona. It would be a big win. And the Trump campaign clearly believes they can win in Pennsylvania. They appeared to abandon the state in the first week of October, but that turned out to be a head fake, and in the past two weeks they have spent nearly $3 million on TV ads. The last four polls have all shown Clinton ahead by between four and seven points, but Trump is still very much competitive here. If a few things break his way, he could win.

Like Pennsylvania, the Trump campaign believes they can win Colorado, and they have invested significant resources into the state. There is a reason for that. The most recent poll, released by Remington Research last week, a Republican polling firm, shows Clinton leading by just two points, 45-43. This poll follows an October spending blitz where the Trump campaign spent nearly $2 million on TV ads. Colorado is in play.

We are lumping New Hampshire and Maine's 2nd Congressional District (ME-2), which is worth one electoral vote, together because of their demographic similarities and because together they would bring Donald Trump to 270 electoral votes. The most recent survey out of ME-2 gave Clinton a one point lead, 38-37. The most recent survey out of New Hampshire showed Clinton up four, 46-42.

As you can see, even if we accept the conventional wisdom that polls are always correct — they aren’t — and that pollsters completely understand how the 2016 electorate will shake out — they don't — during an election that every self-proclaimed pundit and political professional has gotten wrong from the very beginning, Trump still has a very reasonable, though difficult, path to victory. Even in this scenario, one would have to assume he has a 20 percent or greater chance to win on November 8.

But what if we challenge some assumptions?

Imagine that these polling turnout models are oversampling Democrats by a couple percentage points, overestimating turnout for Hillary Clinton and plugging in numbers that would even exceed President Obama's historic turnout in 2008 and 2012 — and when you investigate the cross-tabs on some of these polls, you absolutely see evidence of this taking place.

What if the polls are getting it wrong, even slightly?

And what if there is a true Bradley Effect taking place with Donald Trump that is impacting polling results, i.e. a statistically significant number of Trump voters who are afraid to publicly announce, even to an anonymous pollster over the phone, that they are Trump voters in fear of social backlash, especially following the aggressive attempts by the radical left to intimidate and silence Trump voters by using charged language and even by threatening violence? Are we really sure this is an impossibility?

These factors combined could be worth two to four percentage points. Maybe more.

Suddenly, Trump could very well have the 265 electoral votes locked down and be within striking distance in Pennsylvania, Colorado, New Hampshire, and Maine’s 2nd Congressional District, needing to win just one more state to become president.

We aren’t saying the polls are wrong. They very well might be correct. But the point stands — even if the polls are 100 percent correct, Trump is still a stone’s throw away from winning this election. And if they’re wrong? If there are faulty assumptions in the turnout models that are inadvertently discounting Trump support? Well, then we should be having an entirely different conversation.

The conventional wisdom says Trump is done. We’d bet against.

Frank Cannon has worked in the public policy arena for more than 30 years. He is the president of American Principles Project. Follow him on Twitter @FrankCannonAPP.