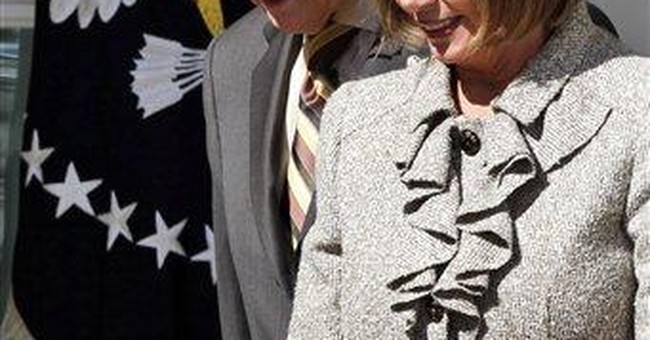 Looks can be deceiving.

When pundits talk about leaders waltzing America into a future of European-style socialism, Barack Obama and Nancy Pelosi get most of the attention. But their work wouldn't be successful without the devoted support of the Senate Majority Leader, Harry Reid, D-Nev. While long appearing to be a trusted public servant, Reid is anything but. He has begged, bribed and bullied Obama's left-leaning agenda through the traditionally more conservative U.S. Senate. Reid's biggest victory to date is the passage of ObamaCare late last year in the Senate.

However, Reid is the only member of this Washington power troika at risk of losing his job in November.

He recently hit a new low in Nevada polls. In a January survey taken by the Las Vegas Review-Journal, 52 percent had an unfavorable opinion of Senator Reid; 33 percent had a favorable view; and another 15 percent said they were neutral. These are terrible numbers for such a long serving official.

This is why Reid's defeat has become a passion for conservatives nationwide.

Floyd was in Las Vegas this week to release ads he created for the Republican Majority Campaign PAC. The ad condemns Reid's involvement with casino giant MGM Mirage and their partner, Sheikh Mohammed bin Rashid Al Maktoum, the supreme ruler of the Arab Gulf emirate of Dubai.

Faced with financial ruin and the mothballing of MGM's ambitious CityCenter project, James Murren, the CEO of MGM, recruited Sheikh Al Maktoum for a financial bailout. At the same time, Reid called and lobbied bankers to save MGM's $8.5 billion project. And now Murren cannot say enough to repay Reid, recently remarking to Vegas Confidential, "I think it's un-Nevadan, unpatriotic, to go against Senator Reid and I will call out those who try."

So with the supportive help of Harry Reid, the Dubai/ MGM partnership was born.

The problem is that Dubai is a country with a terrible human rights record. Human Rights Watch, ABC News, the BBC and others have documented how workers have been held in terrible conditions, against their will, equating the practice to slavery.

Next we learned that Dubai wasn't as rich as they claimed. Now the partnership is troubled and many innocent Nevadans may lose their jobs. So this leaves Harry Reid's fingerprints all over the failed partnership between MGM and an unsavory dictator.

The RMC Pac's new advertisement focuses on the close relationship between Reid, Murren and Al Maktoum. Taxpayers and citizens of Nevada are paying a terrible price because of their collusion. Education and other essential services are being cut in Nevada while MGM and Al Maktoum lobby against reforms that would make gaming companies pay the cost of their own regulation. While at the same time they short-change Nevada's budget and citizens, the MGM leader and this Middle Eastern Sheikh are fighting to re-elect their favorite political protector, Reid.

These and a multitude of other odd connections explain why Harry Reid, the self proclaimed "poor public servant from Searchlight," is now a multi-millionaire.

The winds of change are blowing for Harry Reid. Nevadans have had enough. They are smart people --and will no longer stand for Reid's support of wealthy special interests as he ignores public opinion. Your gravy train is coming to an end, Mr. Reid.