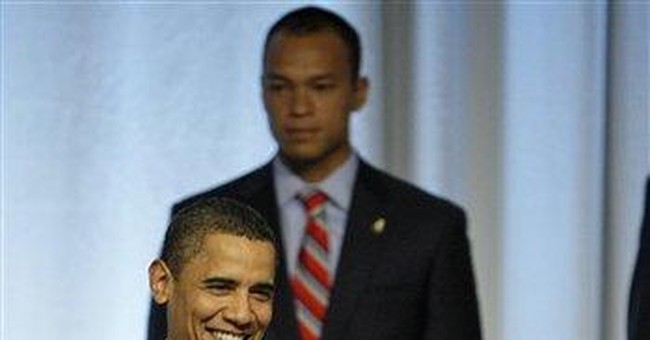 Barack Obama and sneaky congressional leaders don't want you to know what's in ObamaCare. They have made it clear that they will hide all the details from you. When Sen. Jim Bunning offered an amendment that would have required that the language of the bill be made available to the American people 72 hours prior to a vote, Democrats on the Senate Finance Committee squashed it.

It's becoming more apparent that Obama and his allies in Congress don't want the American people to know or read or hear anything negative about ObamaCare. They are willing to shut down debate by any means necessary.

We believe they are laying the groundwork to enact ObamaCare in the dead of night, under the cover of darkness before any of us are any the wiser.

Michael Franc, writing for the Heritage Foundation's blog, The Foundry, gives us the details: "During the Senate Finance Committee mark up of the Baucus health bill... Senator Bunning of Kentucky put forth an innovative amendment. This amendment stipulated that before voting on the measure in Committee, legislative language would have to be accessible to the public for 72 hours and that the non-partisan Congressional Budget Office (CBO) would need to publish an official tally of how much this bill will cost the American people and what the real impact will be on health costs."

Franc continued: "The amendment failed 11-12 on nearly a party line vote. Senator Blanche Lincoln (AR) was the sole Democrat to support this attempt at transparency. The bottom line: when the committee completes its work on this re-make of one-sixth of our economy, Senators will have voted on a phantom - a bill that does not exist with costs that are unknowable until, that is, the unelected legislative draftsmen write the real bill in some back room on Capitol Hill."

It's bad enough when our federal legislators vote on bills they have not even bothered to read. But to actually start "negotiations" on 200 pages of notes and ideas on a bill that has not even been written? Then in the heights of arrogance, they squash an amendment that would require them to give you 72 hours to read what will likely be thousands of pages before they vote on it.

But what's even worse, Obama is trying to muzzle, and intimidate, those who dare to speak out against ObamaCare.

Managed care provider Humana published a letter to its members warning them of potential drastic cuts to Medicare (specifically the Medicare Advantage program) under ObamaCare. It urged its members to contact Congress.

Specifically, Humana said; "if the proposed funding cut levels [in the current health care legislation] become law, millions of seniors and disabled individuals could lose many of the important benefits and services that make Medicare Advantage health plans so valuable."

It was a very valid point to raise as such proposals are on the table, and it makes all the sense in the world to alert people to what is going on and motivate them to call their elected officials. But it didn't take the long for our government to come down hard on Humana. The Department of Health and Human Services (HHS) initiated an investigation and sent an ominous gag-order to Humana:

"As we continue our research into this issue, we are instructing you to immediately discontinue all such mailings to beneficiaries and to remove any related materials directed to Medicare enrollees from your Web sites."

And Sen. Max Baucus demanded that the Centers for Medicare and Medicaid Services launch an "investigation" against Humana as well, claiming the letter put forth "false information." Baucus snidely asked, "Does the First Amendment include lies?"

Of course, there's just one small problem with Baucus' ranting accusation. Humana was voicing an opinion that was well grounded in fact. Bob Ellis with Dakotavoice.com wrote: "Even the Congressional Budget Office (CBO) confirms what the White House doesn't want to get out, with CBO head Douglas Elmendorf telling the Senate this on Tuesday."

If nothing else that has transpired up to this point has convinced you that ObamaCare must be rejected, these shenanigans should.