Erick Erickson
|
Posted: Nov 26, 2020 12:01 AM
Share   Tweet
The opinions expressed by columnists are their own and do not necessarily represent the views of Townhall.com. 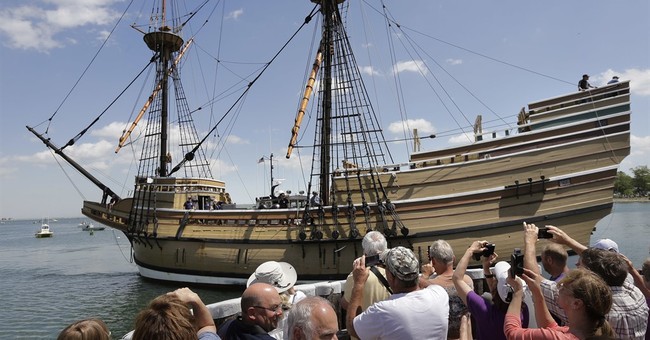 Four hundred years ago, the religious dissidents we know as the Pilgrims began arriving in New England. Just as The New York Times has decided to engage in revisionist history of our nation's founding with its "1619 Project," this past week, USA Today tried the same with Thanksgiving.

In all the revisionist readings of American history, what the progressive reeducators of our history downplay is that great marvel carried into the New World in New England after the brutal winter of 1620 into 1621.

William Bradford, the second governor of the Plymouth Colony, wrote his history of the period called "Of Plymouth Plantation." Bradford claimed the Pilgrims intended to share "the gospel of the kingdom of Christ" with the people who resided in America.

The Pilgrims came intent on establishing their new colony like the early church. Acts 2:44-45 note of the early church, "And all those who had believed were together and had all things in common; and they began selling their property and possessions and were sharing them with all, as anyone might have need." The Pilgrims, based on the demands of investors back in England, organized themselves along the same lines. The key difference was the early church did it voluntarily, and the Pilgrims would use their colonial government to enforce it. Property, housing, cattle and everything else would be communally shared.

Arriving in November of 1620 with 102 people aboard the Mayflower, half the ship's population was dead within months. By 1623, in desperate straits, Bradford determined their communal living arrangements were failing them. The Pilgrims were learning that some worked harder than others, and all of them knew everything would be divided equally.

Bradford documented the decision to abandon communal living in favor of private property. He wrote: "At length, after much debate of things, the Governor (with the advice of the chiefest amongst them) gave way that they should set corn every man for his own particular, and in that regard trust to themselves; in all other things to go on in the general way as before. And so assigned to every family a parcel of land, according to the proportion of their number."

The establishment of private property for each family to tend for themselves provided incentive for not just self-improvement but for community flourishing. Those with excess could trade with those whose labor was not as successful. Eventually, even the housing and farm animals in the colony were divided up and pulled out of the "common good," as Bradford described their communal arrangement.

By providing each family land and corn, from which that family could then grow their food, harvest and replant from their harvest, the Plymouth Colony grew and prospered. The experiment by that religious colony after their first Thanksgiving helped pave the way for what is commonly called the "Puritan work ethic." Through one's own hard work and initiative, a person could make a living for himself.

Now, here in the 21st-century, some seem to have forgotten that lesson, and others are intent on writing it out of the history books. Socialism is all the rage with some, and even more have decided the government should pick winners and losers in our society. The survival of the Pilgrims should teach us better lessons.

Unfortunately, on a bipartisan basis in Washington, our regulators and legislators are increasingly propping up systems that are not fair or level. David cannot slay Goliath, because the tax code and regulatory structure favor and subsidize Goliath while driving up competitive costs for David. We should be thankful for the many blessings we have in this country, and we should, as a matter of policy, remember the Pilgrims and recommit to the ideals of hard work and private ownership to allow all Americans access to the American dream.